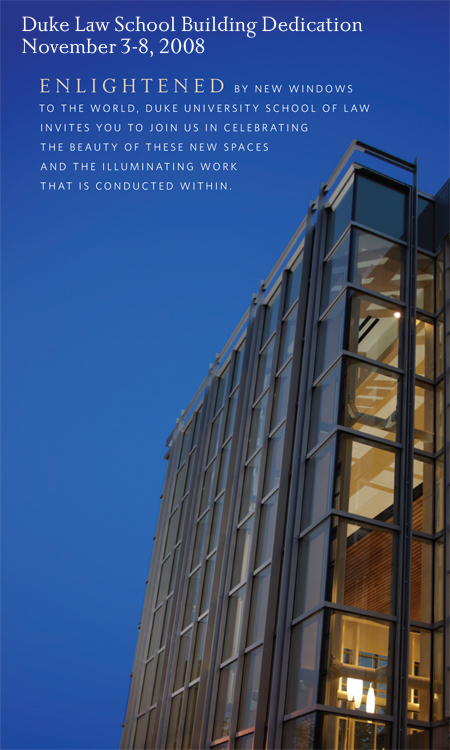 The Duke community celebrated the completion of the Law School’s multi-year expansion and renovation project at a series of "Duke Law Enlightened" events during the first week of November in 2008. A collection of lectures and ceremonies provided an opportunity to reflect on the Law School’s history, growth, and future direction while paying tribute to those who made possible the cornerstone elements of the project: the J. Michael Goodson Law Library and the Star Commons.

The celebration culminated with an official dedication ceremony on Saturday, Nov. 8, during which keynote speaker Justice Anthony Kennedy noted the symbolic relationship between the renovated facility and the principles of the legal profession. Said Kennedy: "Here in this space you can see the affirmation of the stability of the law by the strong verticals, verticals which frame a heritage and a culture and which allow light to inform our work."

Those returning to the Law School after a few years away are pleasantly surprised by how much the building has changed. With a new wing and exterior façade, new classrooms, a renovated library, a new public gathering space, and the addition of several outdoor spaces, it has never looked better. These seemingly disparate elements in fact all have a common theme: to create special places, both formal and informal, for the Duke Law community to gather.

When the current Duke Law School building was constructed in the mid-1960's at the intersection of Science Drive and Towerview Road, the corner was nothing special. Neither of the intersecting streets were major thoroughfares. Since we were building on side streets, the University felt that the new building did not require a strong architectural presence; it could be more utilitarian in design. There was no need for "Duke stone," simple brick would do. The building also need not have the customary Duke Gothic tower.

Over time, however, our part of campus had grown and become an important University center of activity. With the addition of the ever-growing Fuqua School of Business and, in the early 1990's, the Sanford Institute of Public Policy, our corner had become an important focal point for Duke's graduate and professional schools. The simple fact was that the Law School had become a prime location on an important crossroads of the campus.

Architecturally, the Law School building had never engaged the corner. As designed, the Law School did not even present a clearly defined main entrance. The strong pediment of limestone columns on Science Drive seemed to be the main architectural feature. Yet, the building had its main entrance on Towerview - oddly tucked away. While the entrance could be seen on architectural drawings, in reality, it was practically invisible from the street. In an early photo, one can barely see the small array of columns that marked the entrance. As the trees grew over time, it became even more hidden.

Addition of the Alumnae Courtyard

Not surprisingly, as various efforts were made to improve the Law School building, architects looked to strengthen the building's expression on the corner. In the 1980's, the Law School retained Gunner Birkerts to develop a completely new look for the law school, as well as to plan for a major expansion. His plan - which was never fully implemented - would have created a major new entrance in the key corner location that included a domed rotunda. University officials questioned whether the dome was consistent with Duke's overall architectural style which presented an important question: would the Law School have its own architectural style or would we work to be integrated with the larger campus?

The Law School did build an addition designed by Birkerts that used a new material - polished granite - on the façade. But we elected not to complete the renovation of the old building according to his plans. There was a sense that simply building an expensive new entrance - that would add no usable program space - was ill-advised. Birkerts' plans for the corner were put on the shelf.

In 2001, the Law School engaged Peter Saylor of Dagit & Saylor, a prominent Philadelphia architectural firm, to conduct a new concept study of how to expand the Law School. His subsequent study was the basis for the decision to add a new wing - made of what has become known as "Duke brick" - along Science Drive. This handsome new wing included a tower that defined the new main entrance to the Law School and provided new space for faculty offices, six of the student law journals, and two new seminar rooms. The principal beneficiaries, however, were those students and faculty engaged in the Law School's expanding clinics.

At that time, Saylor also developed a detailed plan for enclosing the interior courtyard to provide much needed public space and studied how to animate the corner. His initial idea was to create a raised plaza area that could serve as an outdoor venue for events. As the concept was developed by a prominent landscape architect, the plaza was embellished with benches and a water feature. The sentiment was the same as with past plans - this space was exceedingly important to the future of the Law School.

In 2002, at the University's urging, another architect - Bill Rawn from Boston - was engaged to look at alternatives for enclosing the interior courtyard as well as how to expand the Law School. Focusing once again on the corner, Rawn's preliminary sketches suggested that the corner could be the location for a new office tower. This scheme was never fully developed as it did not match our sense of how best to add needed space. But it did provide yet another vision of what this space could become.

In 2005, it became clear that the plans for the creation of an interior atrium space were going to be prohibitively expensive. The Law School began to search for an alternative approach for creating the community space that was so clearly needed. Our attention was drawn to the possibility of building on the corner. This highly visible - yet architecturally elusive - location seemed to be very well suited. It was, for example, about the right size. The covered courtyard plan would have totaled about 7,000 square feet in program space, which would have included a large monumental stair bringing people up from the back parking lot. In pacing off the dimensions of our corner, the area measured about 50 feet by 100 feet - providing a core area of about 5,000 square feet which closely fit our needs.

We knew we wanted a light-filled space with a sense of openness. Again, this space seemed perfect. A new building on the corner would face northward. This would be an ideal orientation - there would be no blinding sun in the morning or afternoon, but excellent reflected natural light throughout the day. There was also a great potential to create an architecturally-significant statement that would be highly visible to all passing by this part of campus. The Law School had never had a stunning architectural feature that captured people's attention. It seemed to us that by building on the corner, we had the potential to accomplish just that.

With ideal natural light and a prominent location, the new Star Commons, named after Stanley Star '61, is an important part of the Law School's exterior - a shining jewel that will help define the Law School's image. It contains over 4,200-square-feet of space within a three-story glass enclosure. With balconies that look into the space, an adjacent café, and outdoor patio, it provides comfortable seating people to read, study, eat lunch, or work together. It is also able to host large lectures and dinners.

The renovation of the Law Library, named after J. Michael Goodson '66, includes a new façade with larger windows in the reading room and mezzanine and the "Duke brick" that was used so successfully on the front of the Law School and the new addition. The seating has been rearranged to take advantage of the new two-story glass window walls and allows the reading room to be a light-filled center of our community's intellectual life.

Furthermore, the main reading room has been completely re-conceptualized. There are fewer books on the main level, as the goal is to provide easy access not only to library services, but also to those of the computing, web, and media services. A single point of service near the renovated entrance makes it easy for students to obtain reference help, check out books, and obtain computing assistance.

Alongside the addition of the new wing and Star Commons and the library renovation, we have also completely refurbished our classrooms. In five separate projects, with a total investment of almost $10 million, we have rebuilt most of the classrooms from the ground up. Each of these new classrooms features great acoustics, cutting-edge technology, and comfortable furnishings. We believe they are the finest law school classrooms in the country.

The final phase of renovation and construction also included two special outdoor venues to provide areas for the community to enjoy the natural beauty of the Duke Campus. The Beber Sculpture Garden, made possible by a generous gift from Robert '57 and Joanne Beber WC '56, features several pieces of outdoor sculpture by prominent North Carolina artists and includes a patio with "Duke stone" walls, as well as a less formal area with tables set in the woodlands. Several of the sculptures are arranged around a lawn area with a brick seating wall.

"Marcy's Garden," named in honor of the late Marcy Horvitz and donated by Richard Horvitz '78, is located along Science Drive in front of the building. There, a long "Duke stone" wall with special seating areas, lush plantings, and a large lawn area provides a place for students to enjoy the outdoors while reading, studying, or talking with others.

Read more about the history of Duke Law School