The Court of Public Opinion

The Practice and Ethics of Trying Cases in the Media

What catapults a case into the media spotlight? Who is responsible for focusing media and public attention on a particular case? Once a case gains high-profile status, what are the professional and ethical roles and responsibilities of members of the media, the bar, and the institutions involved? How do media balance their First Amendment right to watch over the operation of government with the rights of the accused?

These are the questions to be examined during this two-day interdisciplinary conference. Experts from various fields will consider how the presence of certain core themes—including race, gender, class, and athletics—can turn an otherwise everyday case into a high-profile one. In so doing, they will examine the legal issues common to such cases, including First Amendment rights of free speech and of the press; ethical rules governing prosecutors, defense counsel, judges, and journalists; the desirability of public access to and scrutiny of the justice system; and the needs of institutions and individuals to defend themselves and their reputations in the face of intense public and media scrutiny.

Each of seven conference panels will focus on the perspective of one set of participants in a high-profile case, while a separate panel on comparative law will examine the proper balance between public and private interests. During Friday’s lunch hour, a roundtable discussion will provide the opportunity to consider all of these issues and perspectives through the lens of a hypothetical case, while Saturday’s lunch hour will offer a chance to hear from those who lived through Duke’s recent experience in the spotlight.

Sponsored by the Knight Foundation

Funding for the conference is being provided through a generous grant from the John S. and James L. Knight Foundation. The foundation invests in journalism excellence worldwide and in the vitality of U.S. communities. Since 1950 the foundation has granted more than $300 million to advance quality journalism and freedom of expression. It focuses on projects with the potential to create transformational change. For more, visit the Knight Foundation website.

During spring break in 2006, members of the Duke lacrosse team hired two exotic dancers to perform at an off-campus party. One of the dancers alleged that she had been raped and so began what is now known as the “Duke lacrosse case.” The combustible mix of sex, race, class, and college athletics proved irresistible to the prosecutor, the media, and the public. In the firestorm that followed, many behaved poorly. The prosecutor made a number of false and inflammatory statements to the media, some of the media re-published the information without questioning it, and some members of the public rushed to judgment. Eventually, thanks to the actions of the North Carolina Attorney General and the extraordinary intervention of the North Carolina State Bar, the three young men who had been unjustly accused were declared innocent and the prosecutor was disbarred.

Now it is time to look inward. Did the media permit itself to become the mouthpiece of an unethical prosecutor, and, if so, how can this be avoided in other high-profile cases? How could an experienced prosecutor deviate so quickly from basic ethical rules? Did the judicial system fail to exercise appropriate oversight? Was there a feedback effect such that some members of the public, aroused by the statements of the prosecutor and media coverage, in turn sought to affect the outcome of the prosecution?

High-profile cases tax the legal system just at the very moment when the public’s confidence and understanding might be enhanced. While the details of such cases differ, they all raise fundamental questions about the proper balance between the rights of the individual and the public, and about appropriate conduct by members of the bench, bar, and media in response to intense public interest.

This conference will provide a forum for addressing these important issues. We are fortunate to have the participation of a number of experts who have wide-ranging experience in a host of high-profile cases. It is our hope that the discussions at the conference will lead not only to a better understanding of what has happened in past cases, but to the development of policies, structures, and practices that will permit us to more effectively recognize and safeguard the private and public interests at stake.

Twentieth century entrepreneurs Jack and Jim Knight sought actively and aggressively to reflect in their newspapers the many communities they served. In the process, they helped build, define and even transform those communities by providing each of them a news operation that strove daily to present journalism's ideal: a full, accurate, contextual search for truth.

The need for that kind of shared information has not lessened with changing times and new technology. Solid information and informed debate remain at the heart of community—and yet facts and opinions, as the Duke lacrosse case demonstrates, are often in dispute.

In the aftermath, it would be easy to suggest that the case was somehow anomalous. In fact, the Duke case is only a recent instance of an increasingly frequent phenomenon in which individuals and institutions involved in court proceedings become the subjects of intense media scrutiny, public debate and speculation. As distinct as each of these cases are, they all raise fundamental questions about rights, ethics, professional standards and practices.

This conference comes at an important moment in the development of media, when the shift from the pace and norms of the past are in upheaval because of the speed and capacity of new technology. I look forward to deep and instructive conversations about ethics and values, fairness and responsibility.

We at Knight Foundation are privileged to support one of the nation's great law schools in this examination.

Administrative and publication support for the conference is being provided by Law & Contemporary Problems, a quarterly, interdisciplinary publication of Duke Law School. Founded in 1933, L&CP is jointly managed by a faculty editorial board appointed by the dean of Duke Law and a student executive board appointed by the outgoing executive board. The journal uses a symposium format, generally publishing one symposium per issue on a topic of contemporary concern. L&CP hosts an annual conference featuring the authors of one of the year’s four symposia, and has generously agreed to serve as host for this conference. Papers by a number of conference participants will be published in a 2008 issue of L&CP devoted to the conference. For more information, visit the Law & Contemporary Problems website. 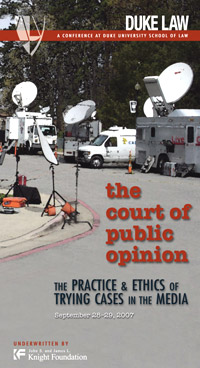 The 2-day conference has been approved by the NC State Bar for 7 general hours credit and 5 hours credit for ethics.

Register Now for the conference.
You will be directed to a secure website where you may register online.

Two-day Registration Fee
Fee for the entire conference, including the Friday dinner and all activities, is $325.

The entire conference will be webcast.

Questions about the conference should be addressed to Kathryn Bradley, Chair of the Steering Committee, via email at kbradley@law.duke.edu, or via phone at 919-613-7014.