Casandra (Cas) Laskowski joined the Goodson Law Library in December 2016. She received her J.D. from the University of Maryland School of Law in 2015, and her M.L.I.S. from the University of Arizona in December 2016. She worked in both schools’ law libraries performing reference and technical services.  She has a BA in Philosophy from Florida International University. Prior to pursuing her career as a law librarian, Cas worked as a geospatial analyst in the United States Army and served a fifteen-month tour of duty in Iraq.

Cas is active in the American Association of Law Libraries, where she is a member of the Diversity and Inclusion standing committee, Vice-Chair/Chair-Elect of the Latino Caucus, and a member of the Library Marketing and Outreach Committee for the Academic Law Libraries Special Interest Section. Her areas of interest include privacy, censorship, and the intersection of national security and individual liberty. 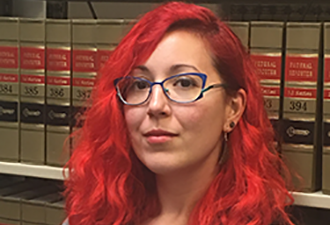