Neil Vidmar’s scholarly research involves the empirical study of law across a broad spectrum of topics in civil and criminal law. He also holds a cross appointment in Duke University’s Department of Psychology.  A social psychologist by training, Vidmar is a leading expert on jury behavior in both criminal and civil cases. He has extensively studied medical malpractice litigation; punitive damages; dispute resolution; and the social psychology of retribution and revenge.

Professor Vidmar is also Research Director for the Law School’s Center for Criminal Justice and Ethical Responsibility. In this position he has been involved in collaborative research on processes leading to wrongful convictions and he has drafted several amicus briefs bearing on racial prejudice in the administration of the death penalty in North Carolina. Vidmar regularly teaches in all of these areas, offering classes and seminars on social science evidence in law, negotiation, medical malpractice litigation, the American jury, and ethics.

In addition to over 200 articles and reports in law reviews and social science journals, Vidmar is the author, with Valerie P. Hans, of American Juries: The Verdict (Prometheus Books, 2007) and Judging the Jury (1986). His other books include Medical Malpractice and the American Jury: Confronting the Myths about Jury Incompetence; Deep Pockets and Outrageous Damage Awards (University of Michigan Press, 1995); and World Jury Systems (Oxford University Press, 2000).

Vidmar has frequently testified about jury prejudice and related issues in American criminal and civil trials. To take one example, he consulted with the defense and conducted research bearing on the trial of John Walker Lindh, the so-called “American Taliban.” He has also testified or consulted about juries in Canada, England, Australia, New Zealand, and Hong Kong, Additionally, he has made presentations before the United States Senate, the U.S. House of Representatives and several state legislatures on issues relating to medical malpractice reform and on the nature of  damage awards. He has drafted amicus briefs on various criminal and civil justice issues for cases being litigated in the United States Supreme Court, the Canadian Supreme Court and a number of state supreme courts. He is a fellow of the Association for Psychological Science and is an active member of the Law and Society Association, the American Psychology-Law Society and the Society for Empirical Legal Studies. 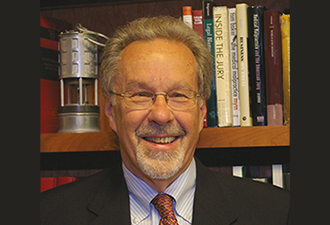