Professor Francis McGovern has the unusual ability to integrate practical experience, abstract thinking, and teaching. This has earned him the "triple crown" in the legal community as premier practitioner, scholar, and teacher in the field of alternative dispute resolution.

In the late 1970s and early 1980s, Professor McGovern was among the first in the nation to write about and to use alternative dispute resolution (ADR) techniques to avoid or to improve the litigation process. Two decades later, the federal judiciary, many state courts, and institutions around the world, such as the United Nations, all seek his guidance on practical and conceptual issues in dispute resolution. His name is virtually synonymous with "mass claim" litigation--the often tens of thousands of tort claims arising out of a major disaster or major product liability issue.

As a court-appointed special master or neutral expert, he has developed solutions in most of the significant mass claim litigation in the U.S., including the DDT toxic exposure litigation in Alabama, the Dalkon-Shield controversy, and his current work involving the silicone gel breast implant litigation.

Seeing that these mass claims would take years to reach and proceed through trial at tremendous expense to the parties and courts, Professor McGovern pioneered new roles for court-appointed special masters as "case managers" and "settlement masters." As a case manager, he organizes the pretrial administration of a case, and uses ADR techniques to help the parties agree on efficient discovery approaches and schedules. The role of settlement master has often required that he develop innovative ways to implement potential settlements. In the Dalkon Shield litigation, he helped organize and administer the distribution of the $2.4 billion trust established to compensate 100,000 women who had sued the maker of the device.

To facilitate his efforts, Professor McGovern has created very sophisticated computerized models of the valuation of these massive claims. By estimating what the claims are worth to the plaintiffs or will cost the defendants, his models narrow the range of reasonable settlement amounts and help parties to settle more quickly.

Countries outside the United States now are recognizing the effectiveness of Professor McGovern's work. Working with United Nations Compensation Commission, which was set up to ensure that Iraq compensates citizens, businesses and government agencies for losses suffered in the Persian Gulf War, Professor McGovern is helping construct a legal framework for handling the 2.6 million claims for reparations from Iraq. He also is developing a transnational ADR center in Europe to handle torts, including silicone gel breast implants and HIV infected blood cases, that cross national boundaries.

A prolific writer, Professor McGovern is the co-author of two published books,Successful Litigation Techniques and The Preparation of a Product Liability Case, and two books in progress, Toxic Substances Litigation and Alternative Dispute Resolution. Both practitioners and scholars rely on his writing for its integration of extensive practical experience with conceptual analysis of fundamental problems in dispute resolution and complex litigation. Professor McGovern's most widely known contribution to the scholarship in this area is his development of the seminal concept of "maturity" in mass torts--a concept generally accepted as critical in analysis of mass torts.

Professor McGovern is widely sought as a teacher, but not only by students enrolled in law school. In addition to carrying a full load of classes, he has given over 50 speeches in the last few years to academics, judges, and lawyers on issues ranging from international dispute resolution to an update of the law of product liability.

Professor McGovern has been motivated in all of his undertakings, practical, conceptual and educational, by the public's decreased faith in traditional governmental systems and procedures for resolving disputes. He wants these systems, like the courts, and procedures, including litigation, to work better. Working better, to him, means operating both more efficiently and in a manner that leaves participants feeling satisfied about the process and results. 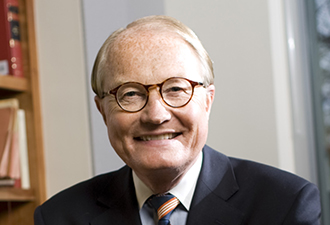