Top-tier speakers from law and defense reinforced a theme that Americans must overcome partisan divisions to meet national security challenges and global competition. 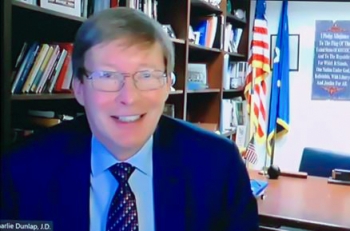 The conference, hosted by Duke Law’s Center on Law, Ethics and National Security, was held virtually for the first time, drawing more than 900 registrants from Duke and 25 other law schools and 35 educational institutions from around the world, U.S. and allied armed forces, law firms, and government agencies, as well as interested community members. While the virtual venue was unique, the energy and experience brought to LENS 2021 by experts in the field captured the attention of both loyal conference attendees and newcomers.

“Today’s national security environment is complex, which is why we pulled together an outstanding lineup of industry leaders and lawyers across a broad spectrum to cover a variety of important areas during LENS 2021,” said Professor Charles J. Dunlap, Jr., USAF (Ret.), executive director of the Center on Law, Ethics and National Security (LENS).

“National security challenges of today call for more than military might. They’ll also benefit from creative ideas and solutions from every aspect of business, government, academia, think tanks, technology and the citizenry,” he added.

“As we reduce the rhetoric and increase the dialogue, we can broaden our understanding of national security issues, both now and in the future, and work together for the best ways to protect our nation and to promote goodwill.”

Gen. Charles Q. Brown, Air Force Chief of Staff, gave the conference keynote speech which addressed many of the issues faced by the armed forces. One Duke Law student found his presentation “particularly great,” remarking that “he seems very no-nonsense and extremely competent, which is what [she] would want in a leader responsible for so many organizational tasks.”

Gen. James Mattis USMC (Ret.), who served as the 26th Secretary of Defense, gave the leadership address. Panels also covered ethics and national security law, artificial intelligence and the future of warfighting, cybersecurity, the global escalation of lawfare, landmine policy and current issues in the challenge of China.

For the first time in LENS history the president of the American Bar Association gave the ethics briefing. Patricia Lee Refo was joined by Judith Miller, former general counsel for the Department of Defense, and Lucian Pera, a leading ethics practitioner. The discussion was moderated by Duke Law’s Shane Stansbury, the Robinson Everett Distinguished Fellow in the Center for Law, Ethics, and National Security, who helped organize the conference and moderated several other presentations.

The dialogue was structured around a series of hypotheticals that illustrated how ethics issues could arise in the national security setting. Working through different scenarios, the three lawyers drew upon their considerable practice experience to illustrate the ethics rule and provide practical ideas on how to implement them with clients in the national security context.

Other highlights included a conversation on national security issues with Michèle Flournoy, co-founder and managing partner of WestExec Advisors who, as Under Secretary of Defense for Policy from 2009 to 2012, was the highest-ranking woman in the history of the Department of Defense.

In conversation with Dunlap, Flournoy offered insights on a range of topics including the recent exchange of air strikes between the U.S. and Iranian-backed militias in Syria, the Obama administration’s counterinsurgency strategy in Pakistan, the urgency of addressing climate change, Russia’s gray zone tactics against democracy, and the preparedness of the United States to compete with China.

“As a nation-state threat, the biggest challenge we face is a rising China that is going to give us a run for our money in economic terms, technological terms, military terms, and even political and ideological terms,” she said. “They are racing and we are not, and I think we have got to get much more serious.”

The good news, she said, is that the areas the U.S. most needs to invest in, such as artificial intelligence and machine learning, STEM education, infrastructure, and emissions reduction technologies, overlap with the post-COVID economic recovery agenda. “We have got to make a whole nation effort in this competition and that includes a military dimension that, in my view, should be focused on deterring conflict, preventing miscalculation between Beijing and Washington,” she said.

“I still believe through both my own idealism and also my own experience that public service is one of the highest and best things you can do,” she said.

“I would love to see an expectation of national service for young people ... because I think it would pay huge dividends not only for the nation but in terms of our social cohesion, bringing together people from different backgrounds, from different geographic areas, creating social cohesion at a time when we’re so divided.”

Mattis offers lessons from the battlefield and the Beltway

Mattis, a four-star general known as the “warrior monk” during his storied career with the Marines, which included leading the U.S. Joint Forces Command and later U.S. Central Command, the military organization responsible for waging the post-9/11 conflicts in the Middle East, spent more than an hour answering questions, many of which were submitted by students and military members, asked by Dunlap.

Mattis said the most important advice he could give on leadership was to delegate responsibility to the lowest competent level. Doing so, he said, both rewards initiative and infuses an organization with ownership of the mission. “My young folks always got me out of every jam I got them into because they had the authority to do it ... so delegate, delegate to the point you’re almost uncomfortable,” he said. “Keep pushing the authority to make decisions to lower and lower levels and it will reward you. Eventually it will even make you a four star general.”

Asked for advice on dealing with a tough boss, Mattis replied that bad leaders can teach one what not to do. “You have to look in the mirror ... and say, ‘What am I doing that could look like that as well?’ As long as you’re learning from it you’ll be okay. Don't let somebody set your internal climate, keep your own locus of control.”

Mattis, selected by President Donald Trump as Secretary of Defense in January 2017, addressed his high-profile resignation in December 2018, saying he felt compelled by duty to accept the job but disagreed with the commander-in-chief too strongly on certain policy issues to continue.

“When it came a point where I couldn’t do the job in good faith and in full faith, then I said that’s it,” he said. “I quit on the president and I put out a page-and-a-half letter why ... and so there was nothing more that I needed to say.”

“We were outnumbered. ... We lost a lot of lads getting into the city. It was house-to-house fighting and so that was a tough time, a very tough time,” he recalled. “I think it comes as no surprise to most of you that the U.S. military was not for the invasion of Iraq. But you keep faith in the Constitution, you keep faith that we elect the commander-in-chief in this country ... and when the decision’s made, you do it.”

Mattis said he couldn’t bear to hear about casualties in the middle of a fight – calling it “one of my weak areas” – and would direct his supporting officers to withhold that information until the end of battle. “The mission comes first. The mission always comes first,” he said. “You just do the best you can to bring them all home alive and then sort it out on the banks of the river, the ones you lost. No one has ever made money betting against America, and so you’ve got to stay on the mission – and it’ll break your pea-pickin’ heart at times.”

It also cost him friends. Mattis recalled a tough personnel decision that made front page news in the early days of the Iraq war: relieving a respected colonel of his command in the middle of a combat operation because he was too reluctant to advance on his target. “He cared so deeply about his men that he was not aggressive at moving against the enemy. Again, the mission comes first. Leaders cannot say ‘I did my best.’ Leaders must do what is required.”

Asked for book recommendations, Mattis, well known as a prolific reader, said books had literally prepared him for victory in battles.

“I was told you will learn more by reading the enemy’s notebooks than you will by reading your own tactics books ... you outfight them based on knowing more than your enemy commanders. And so read, know everything you can possibly know about your adversaries, know their dance and know their poetry, know everything about them because somewhere in there you're going to find a way to go after them.

“There’s this wealth of experience out there waiting for you and all you have to do is start reading.”

Among his suggestions: Marcus Aurelius’ Meditations (“It calms you down so you don’t slap somebody”), Ryan Holiday’s website The Daily Stoic, Personal Memoirs of U.S. Grant, Defeat Into Victory by British field marshal William Slim, and The Good Shepherd by C.S. Forester, the basis for the 2020 film Greyhound.

Mattis challenged law students to broaden their view of life and its complexities, and to strive to understand their clients in their “real world” context.

“You can’t be so passionate for the law that you don’t have any compassion for human beings, especially those that that you see at the very edge of sanity, which is what a battlefield is,” he said. “The qualities I liked [in lawyers] were those who could have both legal competence and empathy for this atavistic, primitive environment that our lads were in, and what I disliked were the lawyers who thought they knew better. I don’t like it when people are out of touch with battlefield realities.”

Asked by Dunlap about the nation’s most pressing national security concerns, Mattis said the U.S. must lean on “Allies, allies, allies” to deal with terrorism, and referenced nuclear weapons in the hands of Kim Jong Un and Vladimir Putin, climate change, and the Chinese Communist Party’s increasingly authoritarian mode at home, “wolf warrior diplomacy” abroad, and status as the world’s largest creditor.

Urging the audience to seek out those with differing views, Mattis said Americans must start to listen to each other to overcome an environment of “scorching rhetoric, divisiveness, lack of trust and fundamental friendliness, [and] lack of respect for each other.

“Even a broken clock is right twice a day. Maybe the person you’re talking to might have something to offer. That’s what this country is built on and no one’s beyond the pale; no one’s a socialist or a communist or a deplorable. This is a country that was based on everybody working together, so let’s get back to it.”

(Note:  Some conference presentations will be featured in the coming weeks via Dunlap’s blog Lawfire.) LENS 2022 is slated for February 24-26, 2022.