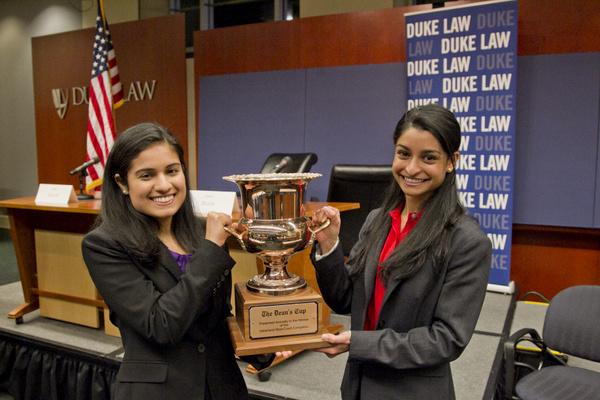 “We had a very difficult, if not impossible, time, trying to decide best team and best oralist,”  said Rendell, of the U.S. Court of Appeals for the Third Circuit. “We’d like to say all four of you were all of those things.”

Rendell served as chief judge on a panel that included Judge Andre Davis of the U.S. Court of Appeals for the Fourth Circuit, and Judge Catherine Eagles of the U.S. District Court for the Middle District of North Carolina.

“What I saw here tonight was a confirmation of the incredible opportunity you all have here at Duke to develop these skills,” Davis said.

All of the judges praised the finalists’ unflappable demeanor under tough questioning.

The students’ arguments were based on the case of Johnson v. Bredesen. One Tennessee law disenfranchises felons, as is permitted by the 14th Amendment, but another statute offers re-enfranchisement to felons who have completed their prison sentences, satisfied the terms of their parole, and paid any court-ordered victim restitution and any child support obligations they might have.

Baliga and Gupta argued on behalf of indigent felons who have outstanding restitution and/or child support payments which they are unable to pay.  They presented a constitutional challenge to the Tennessee statute, claiming that conditioning restoration of their voting rights on the payment of restitution and child support obligations violates the Equal Protection Clause of the Fourteenth Amendment and the Twenty-Fourth Amendment’s ban on poll taxes or other taxes.  Scherger and Shine represented the respondents, various Tennessee officials, whose motion to dismiss was granted by the District Court and affirmed by the Sixth Circuit.

The petitioners argued that requiring indigent persons who have recently been released from jail to make payments that they may not, acting in good faith, be able to afford, in order to regain the right to vote, drew an unfair line between those with means and those without.

“These payments are their only barrier to the ballot box at this time,” Gupta argued.

There is no constitutional impediment to requiring felons to be current in their child-support payments, thus “effectuating the state’s interest in the welfare of children,” Shine said.

“It was a pleasure to listen to you,” Eagles told the four finalists. “You were each so prepared and so on top of this case. It was very impressive, and I liked how you didn’t get flustered.”

“You lived up to the gold standard of appellate advocacy, which is having a conversation with the bench,” Davis said.

The Dean’s Cup Competition, founded in 1963 by Deans E.R. Latty and J.D. Johnston, is held annually for second- and third-year students.  The problem for the competition is taught in the Appellate Practice class offered every fall.

In the preliminary round of the Dean’s Cup, students compete individually, arguing twice for the petitioner and twice for the respondent in front of faculty and alumni.  The 16 competitors with the highest oral advocacy scores advance to the round-robin quarterfinals.  Competitors are power-matched into eight two-person teams based on their standing in the preliminary round.  Four teams each are assigned to represent the petitioner and the respondent.  Each team argues four times — once against each team representing the opposite side — before faculty and alumni judges.  Each team also submits a full-length brief to be graded by three faculty members.  Final rankings are based on brief scores (20 percent) and oral argument scores (80 percent).  The highest-ranked team on each side advances to the final round.