In the classroom with Brodhead, Levi, and Purdy

The class, “Faces of the Law,” is an examination of important American cases and law-related writings, explored within the context of their times. The teachers, a quietly compelling scholar, a former federal judge, and a longtime teacher of American literature with no legal background, create their own curious context.

“We’re different,” Levi says, his succinct statement mirroring the decisiveness that some students — and the other two-thirds of the Faces teaching team — say he brings to the class.

Enthusiasm, experience, and synthesis
The difference was on display during a September class where Marbury v. Madison and The Federalist Papers were among the readings. Brodhead was more demonstrative than his co-teachers, gesturing and laughing, reading passages aloud to emphasize their eloquence.

“He’s as enthusiastic a person as I’ve come across,” Purdy says. “He’s just alive with excitement about an idea, or the structure of a piece of writing, and his MO is just to grab some phrase and say ‘I found this fascinating!’ He’ll read it and you feel the weight of each word.” 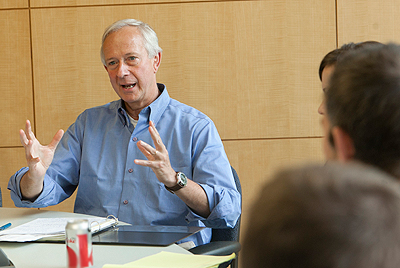 Brodhead’s 32-year teaching career at Yale ended when he became president at Duke in 2004. This is his first foray into legal teaching, but his presence makes sense, given the focus of the class on the social and cultural structure around important legal moments.

“My work has all been in American cultural history,” Brodhead says later in an interview about the class. “My Ph.D. is in English but I’ve taught in an American studies program my whole life. I suppose that if someone asked me about my hobby, I spend much of my spare time reading around in the fields of American history and cultural history. I'm a novice to the legal dimension, but that’s all right — I have a judge sitting next to me. But I do know things about the different chapters of history.”

The students and their instructors discuss the Constitution both in its purely legal context, and as a very young document with a legitimacy that the new country’s citizens were willing into existence.

The conversation focuses on the sources of the new government’s claim to legitimacy, and Levi delves into a topic he enjoys, the roots of American jurisprudence in common law and natural law. He comments on the readings for the day, but also draws from his memory to cite Supreme Court cases he considers on point, and an opinion he wrote as a Supreme Court clerk.

“I feel like it’s actually been a teaching inspiration for me,” Purdy later says. “They each have very, very different teaching styles from mine, and each is very effective. I think David teaches sort of like a scholar-judge. He has a really confident judgment about whether a court is being responsible, whether it’s making things up, whether it’s being cowardly. And it’s not just an opinion, it’s a grounded take.”

Several students talked about the readings and about Levi and Brodhead’s respective statements before Purdy spoke, synthesizing the opinions and applying them to the next portion of the discussion.

“This is the kind of class where you could talk for hours, because the materials and the way we approach them really touch on enormously substantial ideas,” he says.

“I think it’s right to say that Jed has the ability, maybe more than anyone I’ve known, to summarize a person’s or a group’s salient points,” Levi said. “It really moves the class forward.”

“I think they all complement each other nicely, and sort of amplify each others’ strengths,” says Katie Ertmer ’13. “One of the things that attracted me to Duke was Dean Levi, because I thought his background probably meant he understood the law from a different perspective than many other law school deans. So I was excited to take a class with him, and he definitely brings all that courtroom experience to class. I felt like these teachers and this material could be a great combination, and it has exceeded my expectations.”

Class built on legal legacy, lasting relationships
The class is the result of the relationships the three professors have with each other, and with a class taught in the past by Levi’s father at the University of Chicago School of Law; the late Edward H. Levi served as law dean at Chicago, and subsequently as that institution’s provost and president before his appointment by President Gerald Ford to the office of U.S. attorney general. 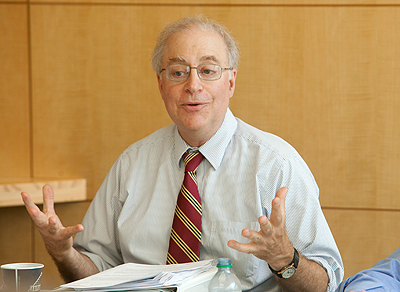 “The genesis goes back to a conversation I had with Jed a year and a half ago,” Levi says. “He’d been out at Stanford and seen the dean there who is a friend of mine. That dean, Larry Kramer, was my father’s research assistant at the University of Chicago, and my father taught the Elements of Law course at Chicago, which is a famous course for first year students. Larry and I had been planning to teach this kind of course at Stanford. Larry told Jed that story, and Jed came to me and said ‘This is very much the kind of thing I’d like to be doing at the law school.’”

Brodhead, who says he spends more time on the class than he thought he would be able to find, says Levi lured him in with a persuasive argument.

“I asked David an obvious question: ‘Why wouldn’t I teach a subject I actually know backwards and forwards?’” Brodhead recalls. “David, intelligent man that he is, gave a killer reply. He said. ‘You’re always talking about how people should be stretching their knowledge and crossing disciplines. Wouldn’t it be more powerful for you to team-teach at the law school than to teach a class in American literature?’ Now that’s a good arguer.”

Purdy and Brodhead also had a friendship stemming from a time before either came to Duke.

“He was dean of the college at Yale when I was in law school, and I was head teaching assistant for another quirky course,” Purdy recalls. “It was a series of public lectures which doubled as a class, and the head instructor, then the dean of the law school, recruited as lecturers prominent figures from across the school, including Dick Brodhead. As a result, I had a seminar with him and he was amazing.”

Brodhead admits to initial qualms over team teaching at Duke Law: “I’ve team taught with people I greatly respect where I don’t think the whole was greater than the sum of the parts. But in this case, it’s working very well.”

Law forged in three “extraordinary eras”
The reading list is inspired by, but not identical to, the curriculum taught by Levi’s father.

“We started with a set of materials that are very jurisprudential, but we wanted to give the course greater focus,” Levi says. “We hit on the plan of focusing on three time periods: the founding and the tradition that existed in American law prior to the founding; the civil war and the struggle over slavery; and the New Deal and the legacy of the New Deal period. What that means in practical terms is that we’ve looked at legal concepts, cases, principles of justice during periods of extreme national stress. That’s the drama of it. All times have their challenges, but these were extraordinary periods.

“When you read back thorough the materials regarding the struggle over slavery, many of them speak to you right now,” he adds. “We’re still very much living with the legacy of that period. The same thing is true with the New Deal: look at contemporary debates over the role of the federal government. These things don’t go away. They’re in our national DNA, our legal DNA. Seeing how people of good will and bad will, people on the winning and losing sides of history, thought about these things in a legal framework is amazingly interesting.”

Brodhead says the class plays to his teaching strengths, and also to his interests.

“Very little of this class has turned on specifics of the law,” he says. “Every week we look at how some large social question gets focused onto the structures of the law and how the law can be used to solve the problem or, in some cases, deflect or postpone a solution of the problem.”
Purdy says he has found the combination of teachers with diverse experience and a long view of legal issues in their cultural context very fruitful.

“The materials serve to give the students a kind of immersion in the way that the practice of the law and judging has been, among other things, a running argument about the relationship between the law on the one hand, and justice, or legitimacy, on the other hand. The materials convey a sense that these aren’t just philosophical questions for legal theorists, but actually arise from the activity of law itself.”

Thomas Dominic ’12 says he took the class because of his desire to learn something about the background principles that inform our current legal system.

“In the normal law curriculum we sometimes invoke the philosophers and scholars who shaped our modern understanding of law, but we never have the chance to confront them,” he says. “I will take away from this class a better understanding of the ways that our scholars, leaders, and judges have woven concepts of natural law, justice, and liberty into the fabric of our legal system.”