Twenty graduating JD students and four LLM students have been honored by the Public Interest and Pro Bono Office for their extraordinary commitment to pro bono service.

At an April reception, students received pins to commemorate their pro bono service to programs such as the Refugee Asylum Support Project, the Innocence Project, the Veteran’s Disability Assistance Project, the Volunteer Income Tax Assistance program, Guardian Ad Litem, and Street Law, among others. Many also worked in Duke Law clinics and externships that focused on legal aid. Collectively, the group contributed more than 3,000 hours of pro bono service.

“The great success of the Duke Law Pro Bono Project is credited to this group of student pro bono leaders, who have given generously of their time and energy over the past three years – and in the case of LLM students, just one year – in service to both the Durham and Duke Law School communities,” said Kim Bart '02, assistant dean for public interest and pro bono. “As these ambitious and accomplished student pro bono leaders graduate this May, they leave behind an inspired and committed group of students to carry on the tradition of pro bono service at Duke Law School.”

Among the recipients were Julie Bellware ’12, who devoted more than 450 hours of service during her three years of law school, serving the Guardian ad Litem program, Street Law, the Innocence Project, the Refugee Asylum Support Project and the Southern Justice Spring Break trip, which she helped to coordinate.

Gordon White ’12 was honored for contributing more than 300 hours of service in helping to strengthen current, and develop new, pro bono projects at Duke Law. He participated in the Refugee Asylum Support Project (RASP), he helped develop a Duke Law-chapter of the Iraqi Refugee Asylum Project, played a significant role in the Veterans’ Disability Assistance Project (VDAP), and contributed 80 hours of pro bono service above and beyond his credit requirement in the AIDS Law Clinic.

Three students who have received significant post-graduate public interest fellowships also were honored: Theresa Gilbertson ’12, who recently received a two-year post-graduate fellowship to work with New Mexico Appleseed, a nonprofit focused on developing innovative policy solutions to poverty; Joanna Darcus ’12, who will work with the Philadelphia-based Independence Project after graduation, focusing on curbing abusive debt collection practices; and Caitlin Swain ’12, who will work with grass-roots children’s law organizations in North Carolina under the auspices of a two-year Skadden Fellowship (read more about Darcus and Swain’s fellowships here).

The complete list of students who were honored follows: 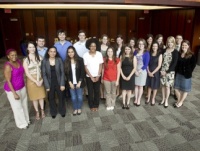 Members of the Class of 2012 honored for pro bono service. (See the photo gallery.)