Duke Law enrolled 239 students from 116 undergraduate institutions to the JD Class of 2023. 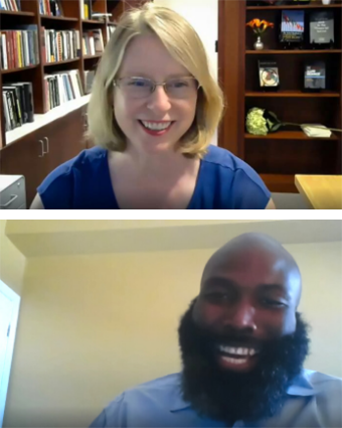 As they began their LEAD Week orientation on Aug. 18, Duke Law’s incoming first-year students were welcomed by Dean Kerry Abrams and Venroy July ’07, who offered words of welcome to the 1Ls on behalf of the alumni community. July then led them in the Duke Law Oath of Professionalism during the session moderated by Assistant Dean for Student Affairs Lewis Hutchison.

Abrams, the James B. Duke and Benjamin N. Duke Dean and professor of law, noted the unusual circumstances of their gathering — a Zoom meeting — necessitated by the Covid-19 pandemic.

“Usually I tell students that they're not just coming a place for three years, but joining a global community for a lifetime,” she said. “And of course, usually I'm referring to our alumni community, because we have committed graduates all over the globe who help each other throughout their careers. But today I actually mean it quite literally.” While some students are starting law school in Durham, others were logging in from their homes around the country and as far away as China, she said.

Duke Law enrolled 239 students from 116 undergraduate institutions to the JD Class of 2023. The class includes 11 who received their undergraduate degrees at Duke University and two veterans. Almost half the class hails from the Northeast and Mid-Atlantic regions. Women make up 57% of the class, while students of color make up one-third.

Assuring each of the 1Ls that they had earned their spot in the class through their hard work and accomplishments — “Our admissions team does not make mistakes,” she said — Abrams told them they were wise have chosen to enter law school now, when some institutions and systems critical to societal health have come under attack.

“We have also become increasingly aware that aspects of our justice system are not actually just,” she said. “For example, it's clear that the structure and practices of police departments have systematically put the lives of our citizens and residents, especially people of color at risk.”

At Duke Law, Abrams said, students will develop the skills and perspective to preserve and improve those systems and learn to exercise the “power” that lawyers have carefully, ethically, and wisely as members of a distinguished profession. She also urged students to practice self-care and compassion.

“I want to encourage all of you to be especially kind to yourselves and others this year,” she said. “1L year is always a challenge and the uncertainty and volatility of the pandemic in which we find ourselves has made life even more difficult and more stressful than usual. So give yourself and others the generosity and space that you need to flourish during really challenging circumstances.

“I am delighted that you have chosen to embark on this career path at Duke Law School.”

July, a principal with Miles & Stockbridge in Baltimore, where he maintains a diverse M&A and corporate practice, urged the students to channel the natural stress they may feel on starting law school – likely amplified by the pandemic isolation and racial tensions in the country – into opportunities for growth by embracing the “collision of ideas” and intellectual rigor they will find at Duke.

“I challenge you to kind of bask in this discomfort,” he said, admitting that as an incoming 1L he wasn’t sure he could “cut it” at Duke Law. “Get used to it and seek out more moments like this, because it's really in these moments that you truly grow. And I'm saying that not just about law school, but how you live your lives and how you will or should practice.”

July, who was raised in the South Bronx after his family emigrated to the U.S. from Jamaica, spent his teenage years at a Connecticut boarding school where minorities made up only 6% of the student body. There he realized a tendency for students to “aggregate in groups of likeness” for the sake of comfort.

“I remember being very cognizant of not only being with the Black kids at the lunch table, but then ultimately realizing that after a couple of weeks or a couple of months, that 80% of my meals were with the same Black students,” he said. “I remember my initial fears of kind of isolating ourselves and missing out on opportunities to interact with others quickly kind of being replaced with justifications based on belonging, similarity, and comfort.”

Eventually he forged broader friendships through sports and in his dorm, he said, but by the time he arrived at the University of North Carolina at Chapel Hill, where he was a Morehead-Cain Scholar and a collegiate wrestler, he “had become much more comfortable with grouping myself with others that look like me as a place of comfort, particularly in unfamiliar spaces. … We all have a tendency to try to make our world smaller.”

Wrestling helped take him out of his bubble, he said, as he competed with and against many people whose experiences were extremely different from his. “In retrospect, it is through those relationships that I've been able to grow to understand the full spectrum of what's happening in America,” he said. “And it was with this grouping of experiences that I entered Duke 16 years ago now with the same discomfort, fears, and insecurities that I know that many of you are currently having.”

At Duke Law, he resisted again retreating into “the comforts of similarity and likeness” and said today some of his strongest relationships are with people who have different life experiences from his. “And from those relationships where I have certainly grown the most.” Staying in touch with his diverse former UNC teammates and Duke Law classmates in different parts of the country and with different political views challenges his perspectives on societal issues and forces him to apply a broader lens to policy analysis.

“It’s really through those interactions that you get the best prism of America, the ability to address different problems from different perspectives,” he said. The first-year class reflects a diversity of thought, experience, and geography in an atmosphere of intellectual rigor that makes Duke special and facilitates transformative intellectual growth, he added.

“Take advantage of that reality,” he said. “In this time of isolation, I challenge you to find ways to expand and build community, to expand your horizons, to not eliminate yourself from having difficult conversations about full panoply of topics — about race and class and sports and politics. This is why you come to Duke. … Push the borders. Explore the differences. Take this opportunity and enjoy the cultural differences here. Leave Duke a more multifaceted person than you are today. And I hope that in 16 years, some of you can be back to tell us about the stories of how your differences created opportunities.”