After Nature: In new book, Purdy traces critical changes in our relationship with the natural world 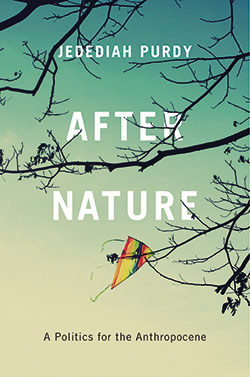 In his new book After Nature: A Politics for the Anthropocene (Harvard University Press, 2015), Professor Jedediah Purdy defines and details the Anthropocene epoch and calls for a new way of thinking about political, legal, and cultural solutions to environmental problems. The book has been praised by critics for its depth and urgency—one review said the book “may very well be the Silent Spring of the 21st Century.”

Anthropocene—the age of humans—is a term coined by an ecologist in the 1980s, and Purdy, the Robinson O. Everett Professor of Law, writes in the book’s introduction that it has its roots in the agricultural revolution, some 5000 years ago.

“Since then, we have made the world our anthill: the geological layers we are now laying down on the earth’s surface are marked by our chemicals and other industrial emissions, the pollens of our crops, and the absence of the many species we have driven to extinction. Rising sea levels are now our doing. As a driver of global change, humanity has outstripped geology.”

Life, post-nature, belies the concept of a natural, untouched world one can access in a national park or even in the middle of the Atlantic Ocean, Purdy writes. And our physical existence mirrors nature’s altered state: “Tuned with vaccines, kept up with antibiotics, patched with surgery, every function extended by engines, screens, and data streams, we are cyborgs in artificial worlds, whether we are the paralyzed child who acts through his robot extension or just a bicyclist with black-rimmed glasses and a smartphone. If Nature were a place, we could not find it. If Nature were a state of mind, we could not attain it. We are something else, and so is the world.”

This new framework for thinking about humanity’s place in the natural world acknowledges an undeniable interplay between environmental policy and issues of health, inequality, preservation and ultimately, survival. As a way of examining the potential effects of embracing a new mode of ecological thought, Purdy traces the history of four distinct modes of American thought about nature, outlining their evolution and their cultural and legal legacies. “Politics will determine the shape of the Anthropocene,” Purdy writes, and through the prism of differing political visions, he describes the potential consequences of the Anthropocene.

Read more about After Nature: A Politics for the Anthropocene