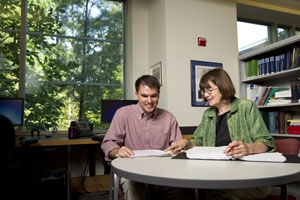 In reaching a settlement on a client’s federal claim of discrimination, students and faculty in the AIDS Legal Project may have developed a template for resolving other claims, and effecting meaningful change for HIV patients in North Carolina.

Clinic students Will LeDoux ’13 and Greg McKay ’13 and Supervising Attorney Allison Rice enlisted the help of the U.S. Department of Justice to advance a claim under Title III of the Americans with Disabilities Act (ADA) after their client was refused treatment at the Fayetteville Pain Center due to her HIV-positive status.

“The Justice Department has really been prioritizing HIV discrimination cases generally, and as part of their Barrier-Free Health Care Initiative,” Rice said. “In cases like this one they have the resources and the leverage to produce settlement agreements that include penalties for discriminating entities, but also force those entities to take on training and education programs that could help eliminate some of the misconceptions and stigma that still affect HIV patients.”

The AIDS Legal Project team helped facilitate the settlement, which was announced in late January by the Department of Justice.  In addition to a $5,000 fine, the Fayetteville Pain Center agreed to pay $10,000 to the clinic’s client, create a new policy explicitly stating that it would not discriminate against people suffering from HIV, and provide training on Title III of the ADA to all employees. That training, completed in March, was created and conducted by McKay, LeDoux, and health educator Genevieve Ankeny Hunter of the Duke Center for Health Inequalities Research.

In announcing the settlement, then-Assistant Attorney General for the Civil Rights Division Thomas E. Perez, now U.S. Secretary of Labor, said that all people deserve equal access to medical treatment.  “People with HIV and other disabilities must not be denied health care because of their disabilities.  Medical professionals, perhaps more than anyone, should understand that the universal precautions they use when treating all patients mean no one should be excluded from treatment based on HIV.  This type of discrimination will not be tolerated.”

The U.S. Attorney for the Eastern District of North Carolina, Thomas G. Walker, emphasized that “this settlement should also send a message to all health care providers in Eastern North Carolina that a disability cannot be a factor in determining accessibility to care and treatment.”

Reaching out for “meaningful change”

The Duke clinic’s close connections to the HIV community nationally and within the Justice Department helped put the settlement in motion.

“We knew the Justice Department has been prioritizing HIV discrimination cases, and we had worked on other cases that violated Title III — for example, on behalf of someone who was refused services by an acupuncturist, someone who was denied participation in a massage therapy training program, and another who was denied access to a therapeutic swimming pool,” Rice said.

Under Title III of the ADA, which deals with public accommodations, a private litigant can only get injunctive relief allowing the individual the access or service denied to them, she added.  “But most people who are treated like garbage don’t want to go back to the place that treated them that way,” she said.  “What they really want is to get the discriminator to feel a sting. You want them to pay some money, and you want them to change their policies and train their staff.  That amounts to meaningful change.  And it’s hard to make that happen as a private litigant.”

“Because we knew the DOJ folks, we decided, ‘OK, next time we are going to see what we can if we get the Justice Department involved, because they have a big stick.’ And it made all the difference.”

After interviewing the client and conducting an initial investigation, Rice contacted the Justice Department, where lawyers reviewed and then accepted the case.  The AIDS Legal Project, through Rice, LeDoux, and McKay, acted as liaison between the client and the DOJ, sitting in on interviews, tracking and, in some cases, augmenting the investigation.

“We spent time developing evidence and helping DOJ attorneys assess what they were getting from their investigation,” Rice said. “We helped them assess claims made by the pain center and we also communicated with our client’s family doctor to help compile a medical history and investigate some specific claims.”

Rice said she is satisfied with the case’s resolution, and certain they will see others like it. “I think that we have a solid relationship with the Justice Department and an understanding of the kinds of cases they are interested in pursuing. Given the number of Title III discrimination cases we see, I expect to work with them again.”

For LeDoux, the case offered far more than a satisfactory resolution of a client dispute. 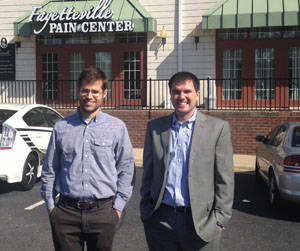 Greg McKay ’13 and Will LeDoux ’13 helped plan and execute a training program for pain center employees as part of a federal settlement agreement they achieved for an AIDS Legal Project client.

“These experiences gave me invaluable insight into how investigations should be conducted, how to interview potential witnesses and construct their narratives into a greater, coherent narrative, and how to coordinate tasks among several attorneys working in different offices and cities,” said LeDoux, who had worked on the case as a 2L during a semester in the AIDS clinic and then helped frame the policy and training remedies with Rice as an advanced student in Duke’s AIDS Policy Clinic.  “The law was always in the background of what we were doing, but what I gained most from my work in the clinic involved the skills and experiences mentioned above that could never be attained in a traditional law school classroom.  The skills and insight I gained from my work in the clinic helped me tremendously in how I conducted myself during my summer employment while in law school, and I imagine, will follow me throughout my career.”

His work on the policy and training elements of the settlement offered a meaningful capstone to his clinical experience, added LeDoux, who is now an associate in K&L Gates' Dallas office.

“Without a doubt, this was the most meaningful aspect of working on this case,” he said.  “With summer jobs and working only here and there for only a few weeks at a time, we, as law students, rarely get to see the fruits of our labor.  As soon as we complete a task, we're outside of the confidentiality bubble never to know what became of our efforts.  I was so fortunate to come back to the clinic when I did to find out that some of the work I had done turned into a benefit for our client.  To be able to experience that victory and talk to the client at the end of her ordeal was very gratifying.”