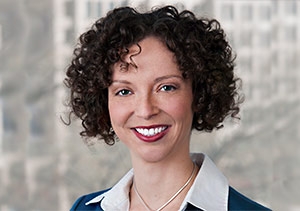 Andie Wyatt has put her dual degrees in law and environmental economics and policy into almost daily use since graduating in 2008, first in private practice at Beveridge & Diamond in Washington, D.C., where she specialized in chemical and product regulation, and now at the American Law Division of the Congressional Research Service (CRS), where she focuses on environmental law and federal lands.

Wyatt describes CRS, a legislative-branch agency within the Library of Congress as a congressional think tank, offering objective, non-partisan, and authoritative advice to House and Senate committees and members. The American Law Division runs, she says, like a law firm for Congress.

“My work on a day-to-day basis can range from writing reports and confidential memoranda, giving briefings in person or by phone, giving seminars and workshops, and assisting with the preparation of testimony,” she says. “We help prepare legislation, respond to constituent inquiries, and engage with all the legislative work of Congress.”

Since arriving at the agency in early 2015, Wyatt has worked on matters relating to air, water, chemicals, wildlife, federal land management, and land transactions, among others. She also has closely followed the recent passage of the Toxic Substances Control Act, litigation under the Clean Water Act, and the implementation of the Clean Power Plan, in anticipation of future requests for advice. She enjoys, she says, having the government and the overall democratic infrastructures as her client.

“CRS offers a fascinating vantage point to observe some of the issues that are on top of the legislative conversation,” she says. It’s satisfying, she adds, to serve law- and policymakers from both sides of the legislative aisle. Wyatt spent her first six-and-a-half-years of practice at Beveridge & Diamond where, over time, she focused primarily on chemical and product regulation, litigation, and arbitration.

It’s work that perfectly fit Wyatt’s goal of merging her interest and training in both environmental science — she was an environmental biology major at DePauw University — and law. She chose Duke Law, in fact, because of the opportunity to obtain a degree from the Nicholas School for the Environment along with her JD. “My graduate work was quite broad, touching on oceans and soil, air, and climate. In my current job I work in all those areas. So having that sort of experience and training has worked out well for me.”

At Duke, Wyatt was one of the first students to enroll in the Environmental Law and Policy Clinic when it was established in 2007. “We did a lot of outreach to environmental groups in that first year to help build the clinic and determine what it was going to be,” she says, recalling her work on coastal issues involving the impact of military operations on sensitive coastal areas. “My clinic work gave me a great real-world and local perspective on environmental law issues. It was very helpful to get that on-the-ground experience.” A summer Stanback Fellowship allowed her to work on air-quality litigation at the Natural Resources Defense Council, giving her valuable insight, she says, as to how non-governmental organizations work together to optimize resources and strategize approaches to litigation and law reform. Serving as an editor of the Duke Environmental Law & Policy Forum was also helpful training for her future career. “I’m ‘blue-booking’ again, so that was a big benefit,” she jokes. “There aren’t a lot of paralegals in my agency.”