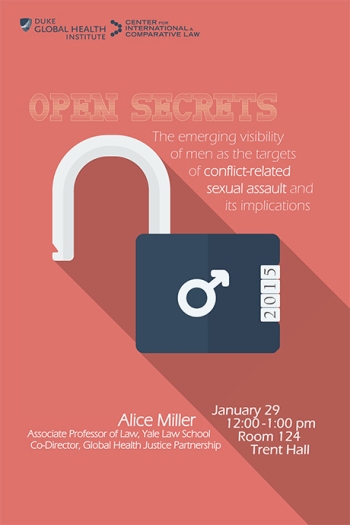 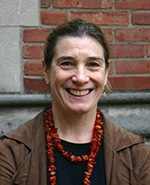 Alice Miller, an Associate Professor (Adjunct) of Law at Yale Law School and the Co-Director of the Global Health Justice Partnership, will give a lecture titled "'Open secrets' – The emerging visibility of men as the targets of conflict-related sexual assault and its implications."  This lecture is co-sponsored by the Center for International and Comparative Law and the Duke Global Health Institute.  Lunch will be served.

In this talk, Professor Miller will inquire into the material and ideological conditions in which sexualized attacks on men in conflict are currently being made worthy of attention and redress in human rights and humanitarian circles. For evidence of emerging visibility, she tracks UN Security Council resolutions, the work of international human rights NGOs, and the policies of international humanitarian aid agencies responding to sexual violence. Contemporary social science research -- and excavations of older materials -- reveal that the genders of the victims of rape and other forms of sexual assaults are greatly variable. Indeed, the very occurrence of sexual assault itself in conflict appears to vary widely. However, the newer narratives and policy shifts attending to the 'rape of men' in conflict seem to be drafting behind the now dominant storyline on the omnipresent rape of women in conflict. However, in some cases in this trailing mode, men as victims are elided to, or in competition with, the health and rights narratives, policies and interventions addressing the 'rape of women' in conflict.  In inquiring into the reasons for this new story of sexual violence and the synergies, disjunctions and conflicts over the various gendered theories of rape when men are produced as ‘victims’, she argues that the eclipsing of ‘gendered harm’ by sexual harm, the salience of conflict as a preeminent site of sexual harm and the still vexed value of consent (now extended to same-sex sexual behavior in public health and international rights law) each play a role in the current emerging visibility of men as victims.  Key elements of this story also include changing practices and players in the worlds of health-oriented humanitarianism, human rights and law, all three of which have become key domains for both authorizing and constraining claims for sexual harm in late 20th and early 21st century.

Alice Miller is an Associate Professor (Adjunct) of Law at Yale Law School and the Co-Director of the Global Health Justice Partnership. She is also an Assistant Clinical Professor in the Yale School of Public Health and a Lecturer in Global Affairs at the Jackson Institute for Global Affairs at the Whitney and Betty MacMillan Center for International and Area Studies. An expert in gender, sexuality, health and international human rights, Miller previously taught at the University of California, Berkeley School of Law, where she was faculty director of the Women’s Institute for Leadership Development, and at Columbia University, where she was co-director of the Center for the Study of Human Rights. She holds a B.A. from Harvard and a J.D. from University of Washington School of Law.