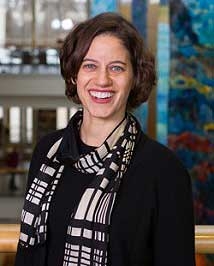 Amy Gillespie gained familiarity with federal rules pertaining to oil and hazardous waste while working after college as a regulatory analyst and technical writer at the Science Applications International Corporation (SAIC) in Washington, D.C. She also gained, she says, a certainty that legal interventions can be effective to solve or stave off environmental problems.

“I think environmental issues are very susceptible to state and local policy work or policy applications, as well as enforcement,” says Gillespie, an attorney in the Environmental Enforcement Section of the U.S. Department of Justice (DOJ). “Other issues of social concern aren’t as well-handled by the legal process and might better be handled through such avenues as social work.”

During her third year of law school at Duke, Gillespie volunteered weekly in the Environmental Division of the North Carolina Attorney General’s Office, a placement arranged through the Law School’s Pro Bono Project, the precursor to the Office of Public Interest and Pro Bono. “I got wonderful exposure to the cases they work on and made some contacts,” she says. She also made an impression on the lawyers she worked with, who reached out to her with news of a job opening as she was completing a post-graduate clerkship with Judge James Wynn, then on the N.C. Court of Appeals.

Gillespie, who had honed her advocacy skills through moot court, enjoyed the broad portfolio she carried over six years as a state environmental lawyer. In addition to handling a range of trial and appellate litigation, she drafted legislation and administrative rules, crafted opinions for the attorney general in response to inquiries from local officials, and advised and represented state agencies and boards in administrative matters.

“It was a great career move for a young law graduate, and one that I highly recommend,” she says. “I particularly appreciate my state experience now, because we work with states to a great extent. It’s helped me understand their perspective and their needs.” Her knowledge of the administrative law process has also been helpful. “At the Justice Department, our cases are, technically, purely judicial, but much of what our clients do on the way to winding up in court is handled administratively,” she says.

At the DOJ, Gillespie sees many hazardous waste and Superfund cases and supervises other attorneys assigned to them. The cases generally have two main goals, she says: “To get private parties who are responsible to take on cleaning up a polluted site, which is very expensive, and to pay the EPA’s costs incurred in investigating the site and in responding to the release of hazardous substances.” Often involving very large landfills and thousands of potential parties, Superfund cases tend to be highly complex and often arise from bankruptcies. Gillespie recalls working on one involving dozens of contaminated sites left in the wake of a mining company’s bankruptcy. “Each of the company’s mining sites became a Superfund site,” she says. “I think we got about $2 billion to put toward ongoing and future clean-up of those sites.”

Gillespie enjoys seeing complex, multi-party settlements come together, ensuring that the liability of parties “dissimilarly situated” is valued and apportioned equitably and the site will be cleaned up. “I enjoy the creativity of finding terms that everyone can live with, and thinking through whether there are measures that might help one party without hurting others,” she says.

A firm believer that “there’s no substitute for hands-on practice,” Gillespie says she’s pleased by the Law School’s investment in clinical education and the growth of the Environmental Law and Policy Clinic, which is directed by one of her former colleagues at the N.C. Attorney General’s Office, Clinical Professor Ryke Longest. She also encourages students interested in careers like hers to learn as much as possible about e-discovery and to take a broad selection of courses in addition to those that are directly relevant, such as Administrative Law, Environmental Law, Federal Jurisdiction, and Evidence.

“I tell students who are interning with us to also take Corporations, Corporate Tax, and Trusts and Estates,” she says. “I continually draw on those courses in identifying the proper parties against whom to bring claims. Complicated corporate form questions come up all the time. They might sound boring to students who are focused on protecting resources, but that’s how you do it as a lawyer — you use the tools you learn about in these courses. It makes it interesting to me.”