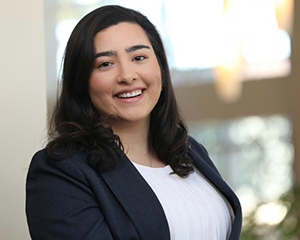 As a child, Ana Maganto Ramirez loved to play dress-up. But her fantasy wardrobe didn’t include princess gowns and tiaras. Instead, she liked to put on her grandmother’s blazers, pearls and heels and pretend she was a lawyer or businesswoman.

“Ever since I was a little girl I’ve wanted to wear those clothes,” Ramirez says. “It felt really powerful to dress like that.” Soon Ramirez will be doing so daily when she spends her 2L summer as an associate in international corporate law at Willkie, Farr & Gallagher in Manhattan.

But her journey has been no fairy tale. For Ramirez, the president of the Latin American Law Students Association (LALSA) and a student officer of the Immigrant and Refugee Project, the path to a JD has been marked by hardship, perseverance and, above all, dedication to family.

Ramirez moved at age 12 from San Juan, Puerto Rico, to an Atlanta suburb with her mother and grandmother. She excelled at English, which she attributes to long hours watching the Disney Channel. But in her new multicultural community she saw how difficult it can be for immigrants to adapt to a different language and culture. And while her mother and grandmother are both comfortable using English socially, they felt anxious in situations where using imprecise language could result in serious legal or financial consequences. Often they would defer to Ramirez, with her more nuanced mastery of English, to communicate their needs.

“Feeling helpless because you can’t speak the language, that’s something my family experiences a lot,” Ramirez says. “You feel like every breath you take, you still need more air to just be able to kind of get your bearings. I think a lot of people feel that way with the law.”

Until her freshman year at Duke, Ramirez had never spent more than three days away from her mother, a special needs teacher and parent liaison at schools in Georgia. But she plunged into campus life, getting involved in Chorale, the Catholic community, and Mi Gente, Duke’s largest undergraduate Latinx organization, andserving as a peer leader through Duke’s Office of Access and Outreach.

She also took full advantage of Duke’s study abroad programs, spending summers in Paris, Venice, and South Korea, and semesters in Scotland and South Africa. “My mom very much tried to reinforce that, regardless of where you go or what you do in your life, travel as much as possible to get to know as many people and places as you can,” she says.

But those relatively carefree days came to an end on Feb. 9, 2017, while Ramirez was finishing up her senior year and waiting to hear back from law schools. Hoping to take in a Duke-UNC game that evening, Ramirez was walking to her tent in K’ville when she got a phone call from home. Her mother had suffered a stroke that would leave her partially paralyzed.

During the hazy month that followed, Ramirez got her acceptance from Duke Law. Telling her mother, who was still in intensive care and fading in and out of lucidity, was a moment she says she’ll never forget.

“She was so happy — it was beautiful,” Ramirez says. “Law school had been both of our dreams since I was a little kid, and for me to get into law school at Duke — the place that had given me an education and now a future — it was her dream come true.” And although she had applied to several other schools, she immediately knew she would stay at Duke. “It became the only choice when I saw how happy it made her, even when she wasn’t fully there.”

But the stroke upended the family’s life. Ramirez’s mother and grandmother, who is 87, left Georgia to live with relatives in Okeechobee, a town in rural south-central Florida, until Ramirez finishes law school. After graduation she will become the family’s chief provider and will be responsible for ensuring her mother and grandmother have a safe, secure home where they will both get the care they need.

For the past two years, Ramirez has spent her school breaks in Okeechobee, relieving her aunt of caretaking and housekeeping duties. Back at Duke, She checks two or three times a day to make sure her mother is eating and getting her physical therapy. Between classes and studying she navigates health care bureaucracy for her mother, as she does for Durham residents as a student in the Duke Health Justice Clinic.

Yet despite the hardships in her life, Ramirez is unfailingly upbeat, says Lecturing Fellow Emily Strauss, who taught Ramirez in her Legal Analysis, Research and Writing class. “She manages to maintain a very positive and kind outlook, to herself and to others,” Strauss says, noting the multiple activities and leadership roles Ramirez has taken on at Duke Law. “She’s always 100 percent present and involved. One of the things I found striking was how seriously she took her community and mentoring role.”

Ramirez has indeed poured her spare time into causes close to her heart, including immigrant and refugee assistance, in addition to LALSA (formerly the Hispanic Law Students Association). During hertenure as president LALSA has become more active than ever, bringing in guest speakers like a Latinx judge, hosting Hispanic Heritage Month events for the first time in three years, and holding a first-ever pre-orientation week dinner for new Hispanic students that was attended by the dean, career counselors, and first-year professors. LALSA also is working on creating career networks for alumni in markets with a large Latinx population.

“I always seek community and I always try to provide that for other people,” Ramirez says. “At the end of the day, people always come before anything else that might need to be done.”

The relationships Ramirez has built at Duke are paying off as her career path comes into focus. Through Mi Gente she met Melany Cruz Burgos JD/MA ’17, a bankruptcy attorney at Willkie who became Ramirez’s mentor through First Generation Professionals (1GP), a program for Duke Law students who are the first in their families to graduate from college. Learning of her interest in international corporate law, Cruz Burgos connected Ramirez with a Latina associate in that division at Willkie. Their quick rapport helped pave the way for the summer associate offer.

“Before I got my job with Willkie it was difficult because I was spending all this time here with no guaranteed success,” Ramirez says. “If, at the end of three years, all I have is debt and no specific way to provide for my mom, it would be very, very hard. So going to a law firm is crucial for me in terms of providing the financial stability that my family has never had.”

Ramirez’s first wish is to have her family attend graduation. Because of her mother’s hospitalization, no family members were present when Ramirez received her undergraduate diploma. She hopes to replace that bittersweet memory with a happier one next year.

“My first four years of Duke were very precious and valuable but they didn’t end well,” Ramirez says. “It wasn’t the graduation that I or my mother or anyone else in my family envisioned.

“So my goal in staying here was to have a bit of a do-over, and hopefully at least one of the people who has been fighting with me can experience not just the end of my journey, but what has been their journey as well. This is a chance to rewrite the ending of our Duke story.” — Jeannie Naujeck