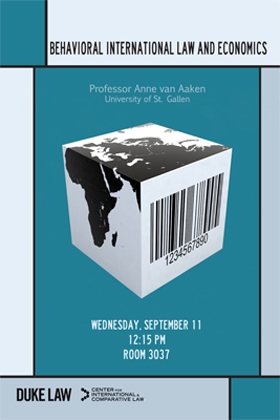 Professor Anne van Aaken of the University of St. Gallen will give a talk and answer questions on the topic of “Behavioral International Law and Economics.”  This event is sponsored by the Center for International & Comparative Law.  Lunch will be served.

There are two challenges to this attempt: first, rational choice approaches to international law usually assume the state as a unitary actor, that is, rationality of an abstract collective entity is assumed. Is it possible to assume deviations from rationality by a collective actor, such as a state? Second, can behavioral law and economics be applied if we look at individual actors relevant in international law (those shaping the law such as international judges and arbitrators as well as diplomats or individuals holding rights under international law), breaking up the black box of states and their relationships?  Being conscious of those difficulties, Professor van Aaken will explore certain promising applications of behavioural research to international law as well as debiasing mechanisms.