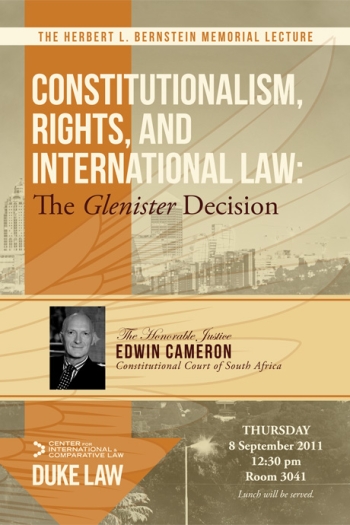 Since it was handed down on 17 March 2011, the judgment of South Africa's Constitutional Court in Glenister v President of the Republic of South Africa has received both acclaim and criticism from legal scholars, political analysts and civic-minded South Africans. A narrow majority of the Court upheld a challenge to the constitutional validity of legislation that disbanded the country’s elite corruption-fighting unit. The majority’s pivotal finding was that the obligation to create an independent corruption-fighting unit, a requirement of international law, also had direct domestic constitutional effect. By cutting through the theoretical divide regarding the relationship between international and national law and placing clear reliance on the South African Constitution’s own invocation of international law, the majority judgment demands that there be consonance, not dissonance, between what the government says and does internationally and what it says and does domestically.

Click here for a summary of the legal issues addressed in the judgment.

Edwin Cameron has been a Justice of South Africa’s highest court, the Constitutional Court, since January 1, 2009. He was educated at Pretoria Boys’ High School, Stellenbosch and Oxford, where he was a Rhodes Scholar and won the top academic awards. During apartheid, he was a leading human rights lawyer. President Mandela appointed him a judge in 1994. He was a powerful critic of President Mbeki’s AIDS-denialist policies and wrote a prize-winning memoir, Witness to AIDS, which has been published in South Africa, the United Kingdom, the United States, and in translation in Germany and in China. He chaired the governing council of the University of the Witwatersrand for more than ten years (1998-2008) and remains involved in many charitable and public causes.