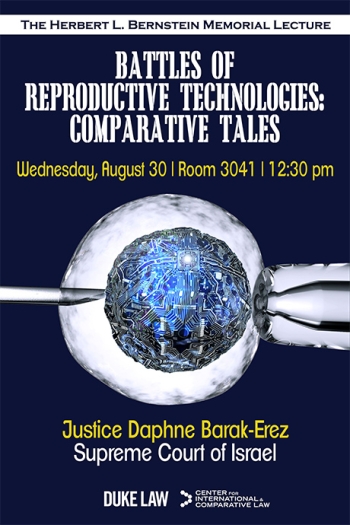 Justice Daphne Barak-Erez, Justice on the Supreme Court of Israel, will deliver the 2017-2018 Annual Bernstein Lecture in Comparative Law titled "Battles of Reproductive Technologies: Comparative Tales."  The lecture will discuss landmark cases on controversies in the area of IVF law, using examples and models from several jurisdictions, thus exploring the potential contribution of comparative analysis to this area of law. More specifically, the analysis will distinguish between two "types" of litigation in this field – horizontal (between two private parties) and vertical (between individuals and the State) – mainly focusing on horizontal litigation and pointing to the judicial approaches used in this context, as well as to the relatively modest contribution of legislation to this area of law.  Lunch will be provided on a first-come, first-served basis. Co-sponsored by the Center for International & Comparative Law and the Office of the Dean.

Justice Daphne Barak-Erez was appointed to the Supreme Court of Israel in 2012. Before that, she was a professor of law at Tel Aviv University for many years, where she held the Stewart and Judy Colton Chair and served as the Dean of the Law School. She is a member of the American Law Institute and the International Academy of Comparative Law. During her career, she has been a visiting professor and researcher at various universities, including Stanford, Columbia, Duke and Toronto. She has been awarded several prizes, including the Rector’s Prize for Excellence in Teaching (three times), the Zeltner Prize, the Heshin Prize, the Woman of the City Award (by the City of Tel-Aviv) and the Women in Law Award (by the Israeli Bar).