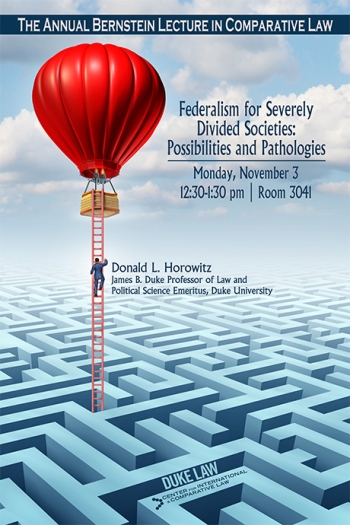 Professor Donald L. Horowitz, James B. Duke Professor of Law and Political Science Emeritus at Duke University, will deliver the Annual Bernstein Lecture in Comparative Law titled "Federalism for Severely Divided Societies: Possibilities and Pathologies."  The lecture is co-sponsored by the Center for International & Comparative Law. Lunch will be provided.

Federalism or territorial devolution short of federalism can perform many functions for societies severely divided by ethnic, religious, or linguistic divisions.  Many of these functions can serve to reduce intergroup political conflict. The number of federations is much smaller than the number that could actually benefit from federalism or significant devolution of power to lower levels of government.  Yet federal or devolved arrangements are often plagued by an array of pathologies, some of which are traceable to lowering the territorial level at which groups interact.  To secure the benefits of devolution and minimize the pathologies, constitutional designers need to assure that the central government is capable of anticipating and responding to negative externalities that may follow upon devolution of authority.  Not all central governments are capable of doing so.

Donald L. Horowitz is the James B. Duke Professor of Law and Political Science Emeritus at Duke University and Senior Fellow at the International Forum for Democratic Studies of the National Endowment for Democracy.  He is the author of seven books: The Courts and Social Policy (1977), which won the Louis Brownlow Award of the National Academy of Public Administration; The Jurocracy (1977), a book about government lawyers; Coup Theories and Officers’ Motives: Sri Lanka in Comparative Perspective (1980); Ethnic Groups in Conflict (1985, 2000); A Democratic South Africa? Constitutional Engineering in a Divided Society (1991), which won the Ralph Bunche Prize of the American Political Science Association; The Deadly Ethnic Riot (2001); and Constitutional Change and Democracy in Indonesia, published in 2013 by Cambridge University Press.

Professor Horowitz has been a Visiting Professor at the University of Chicago Law School and at the Central European University and a Visiting Fellow at Wolfson College, Cambridge, at the Law Faculty of the University of Canterbury in New Zealand, at Universiti Kebangsaan in Malaysia, and in the Academic Icon program at the University of Malaya.  In 2001, he was Centennial Professor at the London School of Economics, and in 2001-02, he was a Carnegie Scholar. In 2009, he was presented with the Distinguished Scholar Award of the Ethnicity, Nationalism, and Migration Section of the International Studies Association.

Professor Horowitz is currently writing a book about constitutional design, particularly for divided societies, a subject on which he has advised in a number of countries. In 2010-11, he was a Fellow of the Woodrow Wilson Center, working on this project. In 2011-12, he was a Jennings Randolph Senior Fellow at the U.S. Institute of Peace and a Reagan-Fascell Fellow at the National Endowment for Democracy, and in 2013, he was a Siemens Prize Fellow of the American Academy in Berlin. Since September 2013, has been Senior Fellow at the International Forum for Democratic Studies of the National Endowment for Democracy in Washington, DC.  Elected to the American Academy of Arts and Sciences in 1993, he served as President of the American Society for Political and Legal Philosophy from 2007 to 2010. In 2011, Professor Horowitz was awarded an honorary doctoral degree by the Vrije Universiteit Brussel, the Flemish-speaking Free University of Brussels.