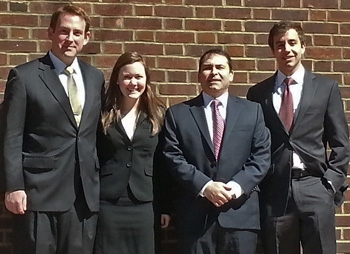 Elyse Lyons ’14, a student in Duke's Appellate Litigation Clinic, argued a case in the United States Court of Appeals for the Third Circuit on March 24, in Philadelphia.  Lyons argued on behalf of the appellant, Horace Branch, in Branch v. Sweeney, before a panel consisting of Judges Julio M. Fuentes, Morton I. Greenberg, and Franklin S. Van Antwerpen.

The Third Circuit appointed Sean Andrussier ’92, director of the yearlong Appellate Litigation Clinic, to represent Branch, who is appealing a federal district court’s dismissal of his petition for a writ of habeas corpus.  Branch, a state prisoner in New Jersey whom a jury convicted for a shooting death years ago, is serving a life sentence.  At issue in the appeal is his claim that he was denied his Sixth Amendment right to a fair trial based on his trial counsel’s failure to call two exculpatory witnesses for his defense.Under Andrussier's supervision, Lyons and her 3L teammates, Phil Barber and Adam Garmezy, worked on the appeal from briefing through oral argument.  All were in Philadelphia for the oral argument.  The State’s argument was delivered by a special deputy attorney general.

“It was a great honor and thrill to argue before a panel of distinguished federal appellate judges,” said Lyons, who will join Jones Day in Dallas after graduation. “The judges asked thoughtful questions. This is a highlight of my experience at Duke.”

Andrussier said the case immersed his students in the nuances of appellate practice and the appellate process, and the intricacies of federal habeas law, among other matters. “They had to master a lengthy record arising from a criminal jury trial and years of state post-conviction proceedings, sort through a number of legal issues, and work together to develop arguments and strategy,” he said. “They all were involved in preparing Elyse for the oral argument. It was a team effort.”

The team work made the experience particularly memorable for Garmezy, who will begin practice at Akin Gump in Houston. “The opportunity to dive so deeply into niche areas of the law in such a tight-knit group is one I will truly cherish,” he said. “Our work through the clinic on behalf of our client has been both intellectually engaging and of great importance.”

Barber, who is headed to White & Case in Washington, D.C., also commended the learning experience. “Seeing a habeas appeal from the beginning of research, through mastering the record and the briefing process, to the oral argument is a unique and remarkable opportunity,” he said.