The third-year student is one of two nationwide chosen to work in the Office of the Solicitor General this summer. 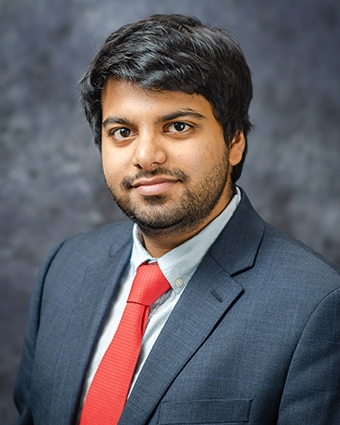 Rohit Asirvatham ’21 has been selected for a Phillips Fellowship in the U.S. Department of Justice.

Phillips Fellows work in the Office of the Solicitor General in the summer between graduating from law school and beginning a federal judicial clerkship. They provide support to attorneys by performing various research and writing tasks, including assisting with the preparation of briefs on the merits in Supreme Court cases. The office typically awards two Phillips Fellowships per year.

Asirvatham said that his exposure to appellate law work as a summer associate at Williams & Connolly in Washington, D.C., had led him to seek out similar opportunities and sparked his interest in the fellowship. Sarah Harris, a Supreme Court advocate at the firm who had been a Phillips Fellow herself encouraged him to apply and assisted with his application.

“At first, I was honestly just shocked that I was offered the position,” he said. “But I am very excited about the opportunity to spend the summer doing really interesting work and learning from the office’s fantastic lawyers.”

At Duke, Asirvatham has been an articles editor on Duke Law Journal, a member of the Lateral Faculty Hiring Committee and the South Asian Law Student Association, a research assistant for Professor Matthew Adler, and a teaching assistant for Professors Sean Andrussier ’92, and Sara Sun Beale. He credited Andrussier’s Appellate Practice class for improving his writing and giving him confidence he could “contribute to good appellate work.”

Andrussier, who directs the Appellate Litigation Clinic, called the Phillips Fellowship a “perfect fit” for Asirvatham, who is hoping to pursue a career in appellate law. “Rohit is super bright and passionate about the law and learning,” he said. “He’s adept at untangling complex legal issues, and he’s a terrific writer teeming with interesting ideas. I expect big things from him.”

Asirvatham said Beale had been a “huge influence” and source of advice and encouragement as he applied for the fellowship. Beale, the Charles L. B. Lowndes Professor of Law, served as Assistant to the Solicitor General from 1977 to 1979 before she joined the Duke Law faculty.

Asirvatham, who will clerk for Judge David R. Stras on the U.S. Court of Appeals for the Eighth Circuit following his fellowship, praised the Duke Law faculty for preparing him well for his post-graduate work.

“The care with which our professors craft their classes to help us learn more than just the specific, relevant rules has been fantastic,” he said. “Almost every class I’ve taken at Duke has helped me become a better thinker and given me skills that will help me in this fellowship.”

The Phillips Fellowship is named for Samuel F. Phillips, who was the second Solicitor General, serving under four presidents from 1872 to 1885. Phillips spent most of his life in North Carolina and served in positions in the state legislature and judiciary.