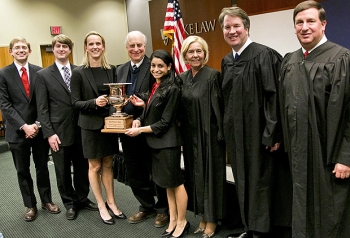 A panel of federal judges sided with the third-year team of Shifali Baliga and Celia Glass after hearing oral arguments in the final round of the 2014 Dean’s Cup moot court competition on Feb. 24.  Glass was named outstanding oralist by the judges. Baliga also won the Dean’s Cup in 2013.

“You were able to turn our questions into positive affirmative points, rather than being thrown off,” Chagares said. “You used it to get into something you wanted to talk about, which is not easy to do.”

Kavanaugh said the students were “outstanding advocates at the ‘A plus’ level, not just for moot court, but for advocacy that we see on a regular basis.”

Shifali and Glass represented the petitioners, two U.S. citizens who filed a lawsuit against the federal government and former Secretary of State Donald Rumsfeld in 2006. The citizens, who worked for an Iraqi-owned security contractor, were detained in a military facility for weeks after contacting the Federal Bureau of Investigation and the U.S. State Department about suspicious activities undertaken by their employer. They were eventually released, and no charges were ever filed against them. The petitioners allege that they were tortured during their captivity.

The questions before the judges were whether or not the petitioners could sue for damages under a previous case, Bivens v. Six Unknown Named Agents of Federal Bureau of Narcotics, and whether or not they provided enough evidence to sue Rumsfeld personally.

The Dean’s Cup Competition, founded in 1963 by Deans E.R. Latty and J.D. Johnston, is held annually for second- and third-year students.  The problem for the competition is taught in the Appellate Practice class offered every fall.

In the preliminary round of the Dean’s Cup, students compete individually, arguing twice for the petitioner and twice for the respondent in front of faculty and alumni.  The 16 competitors with the highest oral advocacy scores advance to the round-robin quarterfinals.  Competitors are matched into eight two-person teams based on their standing in the preliminary round, with four teams assigned to represent the petitioner and the respondent, respectively.  Each team argues four times — once against each team representing the opposite side — before faculty and alumni judges.  Each team also submits a full-length brief to be graded by three faculty members.  Final rankings are based on brief scores (20 percent) and oral argument scores (80 percent).  The highest-ranked team on each side advances to the final round.