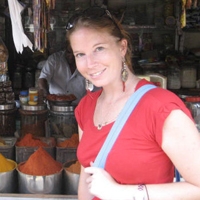 Bettina Roberts ’10 knew she’d be spending the summer working abroad in her pursuit of a JD/LLM in international and comparative law. But when she boarded a plane for Switzerland for a job with Geneva-based nonprofit International Bridges to Justice (IBJ), she had no idea how multinational her summer would be.

“I’d been to Geneva before and I speak French, so I knew I wanted to go to there,” she said. “I also knew I was interested in criminal law. Other than that, I didn’t really have any criteria. And when I went in to work on my first day, I had no idea what I’d be doing. I definitely didn’t expect to end up in India.”

She also didn’t expect to help plan a training seminar for more than 100 legal aid defense attorneys in India. The training is especially important there, Roberts said, because there is very little public funding for defense attorneys representing indigent defendants, and very few attorneys who focus only on legal aid work.

“Nothing like our permanent full-time ‘public defender’ exists there,” Roberts explained. “They really benefited from the hands-on training and inspiration that IBJ was able to provide."

IBJ works in several countries to ensure due process and competent legal representation for defendants, and to hold countries to basic standards of human rights in the criminal justice process.

“The idea is to help reform justice systems from the inside,” Roberts said.

Working closely with IBJ founder and CEO Karen Tse, Roberts planned materials and logistics for the seminar, which included training in opening statements and cross examination by attorneys from the San Francisco Public Defender’s office. Roberts said that response to the seminar in India was impressive. Attorneys from every Indian state were invited to attend. While 108 invitations went out, more than 130 people showed up, according to IBJ’s web site. Also present were four Indian Supreme Court Justices.

“Working with Karen was a great experience,” Roberts said. “She doesn't take no for an answer, and is at once so fierce and so compassionate that it was impossible not to be inspired to do good.” The American Bar Association presented Tse with their 2008 International Human Rights Award in August.

Roberts was taken with India, so much so that she spent the last two weeks of her summer backpacking around the country before returning to Durham. She also plans to do more work in India.

“I definitely want to do something with India, particularly in the criminal justice field, in the future,” said Roberts, who expects to maintain her connection with IBJ, possibly even working for the organization in some capacity during the school year. “I'm actually taking Elementary Hindi this semester, which, while not great for my schedule, is a lot of fun so far.”

Roberts’s position with IBJ was arranged through Bharat Dube ’86, a Geneva lawyer who is president of IBJ’s Swiss Council.

“There are a lot of neat connections involved in this IBJ opportunity,” said Jennifer Maher ‘83, Assistant Dean for International Studies. “Bharat Dube is a long-time supporter of Duke’s Geneva program and has arranged internships for students with his company, Richemont International. In 2007, Bharat introduced me to Karen Tse and IBJ. I encouraged Bettina to apply for an internship there and in the meantime, Bharat was making introductions for IBJ in India, which resulted in the 2008 summer training in India and Bettina’s incredible experience there.”

Law School alumni were also involved in funding Roberts’s work overseas. She received the International Development Fellowship, intended for students to spend all or a part of the summer interning at a non-governmental organization or pursuing an independent research project in a developing country. The fellowship was the idea of two alumnae from the Class of 2004, Sarah Dadush and Sohini Chatterjee, who have since generously supported it.

“I think the students return knowing so much more about their own legal system and with their eyes opened to the opportunities available in international and comparative law.” Maher said. “Bettina’s experience shows impact that you can have with the JD/LLM degree.”