Duke Law School’s Black alumni talk about the Black leaders who inspire them to greatness in their career and communities and their responsibility to fortify the next generation of leaders.

Duke Law School’s Black alumni are an accomplished group of lawyers and leaders in fields including environmental law, civil rights, biotechnology, politics, corporate litigation, and more. While their roads to the practice vary, they follow in the footsteps of Black trailblazers in the law, such as Charles Hamilton Houston, who played a pivotal role in civil rights litigation and was the first general counsel of the NAACP, and Rosalind Brewer, one of only two Black women to head a Fortune 500 company.

For these alumni, Black history is American history, to be taught, honored, and celebrated by the broader community. Below, several share their thoughts on Black History Month as a time of reflection and a call to action, recalling the Black pioneers who stirred their interest in the law.

A graduate of the Law School and Sanford School of Public Policy, Paul Brathwaite puts his skill to work in Washington, D.C., as chief strategist at Federal Street Strategies, a government relations firm that he co-owns with his wife, Sonya Thorpe Brathwaite T’93. 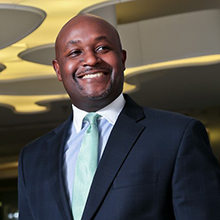 He’s a widely known and well-respected figure in D.C.’s political circles, earning him a spot on The Hill's "Top Lobbyists" list for the past six years and designation as the Washington Government Relations Group "Lobbyist of the Year." Earlier in his career Brathwaite made regular appearances on Roll Call's annual list of the most influential staffers on Capitol Hill.

He says his interest in politics and law started with a high school assignment that introduced him to the life and career of trailblazing lawyer and politician Ron Brown.

Brathwaite said, “As I was growing up in Delaware, my twelfth-grade U.S. history teacher got me interested in politics. We were assigned a project to follow the 1988 presidential primary and my mother bought me a subscription to Time Magazine to help track the race. The following year, a Time article profiled the late Commerce Secretary Ron Brown, who was also the first African American Chairman of the Democratic National Committee. He was a prominent lawyer in Washington, D.C., and had been quite successful as a lobbyist. I immediately wanted to follow in his footsteps and become a lawyer."

He added: "I had hoped to work with him in some capacity, but he died in an airplane accident on a trade mission a few weeks before I graduated from Duke Law. I still think about him often, the positive way he carried himself professionally, and the legacy he left behind. President Clinton once said that had it not been for Ron Brown, he never would have become president. Similarly, a generation of Black lawyers today still point to his work and try to emulate his amazing career.”

Timothy and Jerome Hughes are brothers who graduated from the Law School six years apart. While at Duke, Timothy worked at the White House in the Office of Cabinet Affairs as part of the Law School’s Duke in D.C. program. Jerome holds an MBA from the University of Virginia’s Darden School of Business.

Currently, Timothy works as a litigation associate at Winston & Strawn in Charlotte, N.C., and has been recognized by The Best Lawyers in America: Ones to Watch and been named to the National Black Lawyers’ Top 40 Under 40 list. Jerome is a corporate associate at Kirkland & Ellis in Chicago.

In celebrating Black History Month, the brothers honored Black leaders who’ve inspired them to pursue their careers in law. Jerome looks to Rosalind Brewer, the current CEO of Walgreens Boots Alliance, former group president and COO of Starbucks, former CEO of Sam's Club, and, with TIAA’s Thasunda Duckett, one of only two Black women currently serving as CEOs of Fortune 500 companies.

“Rosalind Brewer, who is not a lawyer by trade but obtained a law degree, is a leader who inspires me to dream big, pursue excellence, and move beyond the labels that are often placed on African Americans,” Jerome said. “As a c-suite executive for several Fortune 500 companies, Rosalind has shown a deep passion for innovation, risk management, organizational effectiveness, and diversity/inclusion. Although she does not practice law, Rosalind embodies a life trajectory exemplifying the breadth of opportunities that come with a strong legal training.”

Timothy credits a legendary civil rights attorney for sparking his interest in the law.

“The lawyer whose work I most admire is Charles Hamilton Houston. During his career, Houston laid much of the legal foundation for the landmark civil rights decisions of the 1950s and 1960s. Houston also served as dean of Howard University School of Law and was the first general counsel for the NAACP. He was a brilliant lawyer, educator, and a social engineer who recognized the importance of training the next generation of Black attorneys. Houston’s career and legacy is what led to my initial interest in the legal field.” 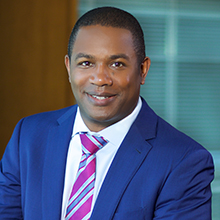 A partner in Business & Tort Litigation at Jones Day in Cleveland, Corey Lee works as a strategic legal advisor for clients involved in litigation and government investigations. He’s also a leader in e-discovery best practices and policy.

Lee is an active member of the Duke Law Alumni Association Board of Directors, American Bar Association, National Bar Association, Chairman of the Human Relations and Risk Management Committee at AMIkids, and a Fellow of the Leadership Council on Legal Diversity.

Lee says Black History Month is an opportunity to educate the broader community about the strength and spirit of Black Americans — past and present.

“Growing up, Black History Month was a time when the accomplishments of Black Americans were celebrated within the Black community. More is needed. All Americans need to understand the challenges, perseverance, and success that many Black Americans have obtained in spite of many obstacles. It is my hope that a deeper understanding of the experience of Black Americans will help lead to a society ready to confront our country’s past in order to enjoy a brighter future." 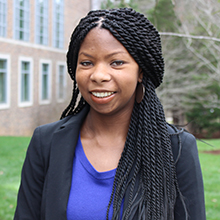 A standout at Duke Law, Jasmin Lott held internships at the NAACP Legal Defense and Educational Fund and Neufeld Scheck & Brustin and an externship at the U.S. Department of Justice, and worked at the Law School’s Children’s Law and Civil Justice clinics. Prior to graduation, she earned a spot in the DOJ’s prestigious Honors Program for federal attorney recruitment.

As a trial attorney in the DOJ’s Civil Rights Division, Lott looks to civil rights lawyer and advocate Sherrilyn Ifill as a role model. “I have drawn inspiration in my legal career from many Black leaders and civil rights pioneers, but there is one attorney whose career I have strived to emulate — Sherrilyn Ifill,” Lott said

“As the president and director-counsel of the NAACP Legal Defense and Educational Fund, Ifill has worked tirelessly to protect and advance the civil rights of Black people in this country. I hope to follow in her footsteps, dedicating my career to advancing racial justice.” 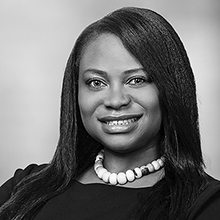 Serena Rwejuna, a partner at White & Case in D.C., is a Chambers-ranked energy attorney. A renewables, energy transition, and ESG attorney, she has served in leadership positions on the American Bar Association’s Environmental & Energy Litigation Committee, the D.C. Chapter of the American Association of Blacks in Energy, and the Energy Bar Association.

Rwejuna offers her time in her local community and her Duke community as well. A long-time volunteer and supporter, Serena is completing her third term as president of Calvary Women's Services’ Board of Directors, where she works to empower women to overcome homelessness and regain financial independence through housing, health, education, and employment programs. She is an inaugural councilmember of Duke Law’s Alumnae Leadership Council and serves as co-chair for the Duke DC Regional Board of Directors.

For Rwejuna, “Black History is American history. But our stories are often shared through a lens of otherness. Black History Month is an opportunity to ensure the rich past and vast accomplishments of Black Americans are told by our community and reach a wider audience. Particularly for our youth — for the next generation of leaders — this intentional, visible, and celebrated representation is critical. My hope is that we continue to honor, study, and acknowledge Black leaders and contributions 365 days a year — living Black history!” 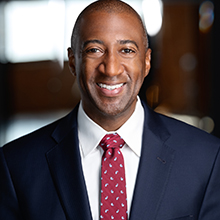 With degrees from Duke Law and the Fuqua School of Business, Squire Servance is senior vice-president, general counsel, corporate secretary, and chief compliance officer at Repligen Corporation, a life sciences company focused on bioprocessing technology leadership based near Boston. He counsels the company's board of directors and senior management and serves on its environmental, social, and corporate governance committee.

Outside of the office, Servance serves on boards for Camden County Habitat for Humanity and the Duke Alumni Association. While at Duke, he worked on the Duke Journal of Gender Law & Policy and Duke Journal of Constitutional Law & Public Policy, and published the Supreme Court case commentary “Jones V. Bock: New Clarity Under the Prison Litigation Reform Act” 3 Duke J. Const. L. & Pub. Pol’y Sidebar 75-83 (2007).

Servance says he looks to Black History Month as a time of reflection and recharging: “Black History Month is a time to honor and remember the contributions and sacrifices of Black Americans that helped shape this country. I use this time to get inspiration from stories of Black ingenuity, excellence, and promise, and to garner wisdom from lessons learned from Black Americans' ongoing fight for justice and equality. I embrace the spirit of Black History Month and use this time of reflection to fuel an ambition to change my community and the world for the better.”