“Black Lives, Atticus Finch, and the Ethics of Legal Fictions:” A community conversation

Lee’s 1960 novel, To Kill A Mockingbird,  addressed issues of race, class, and the individual and societal responsibility to stand up to injustice. White lawyer Atticus Finch became a hero to many for his legal representation of a black man, Tom Robinson, falsely accused of raping a white woman, and his willingness to stand up against the mores of the town and time in which he lived. Lee’s novel Go Set a Watchman, published in 2015 but written prior to Mockingbird is set 20 years later. Also narrated by Atticus’s daughter Jean-Louise, the novel stunned many readers with its depiction of Atticus’s regressive racial views and resistance to cultural transformation and progress in his native Alabama.

“I think there is something we can all learn from the idealistic Jean Louise,” Benning said. “She was willing to imagine. Go Set a Watchman calls into question whether her father was really who she imagined him to be. Nevertheless, she was willing to imagine what wasn’t as if it were. In truth, Atticus was human and not just heroic, but Jean’s consciousness was formed with a hero in mind. She sought and expected the best of him. 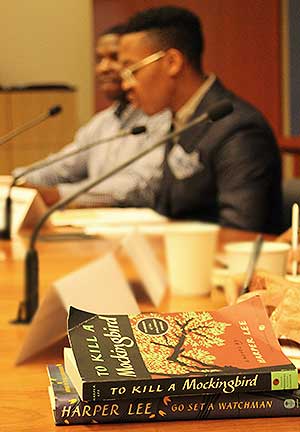 “As Duke Law students, we must be willing to reimagine Duke and to reimagine the world, to seek and expect the best of this place, and to thrust that vision into reality with our activism.”

That willingness to work for a reimagined reality forms the link between Lee’s two novels and the “Black Lives Matter” movement, Benning explained.

“Yes, there are obvious parallels between the falsely accused Tom Robinson and the unarmed black men who have shared Tom’s fate throughout our country’s history and present,” he said. “The story isn’t new, and neither is our responsibility as future lawyers and scholars of all disciplines to determine our role in reimagining the world as a just and equal place.”

Regardless of the author’s intentions, Atticus Finch became a national hero at a time of social change and groundbreaking legal activism, said Holloway, the James B. Duke Professor of English and Professor of Law and Professor of Women's Studies.

“What we needed from an America who was grappling with recent Supreme Court decisions, grappling with changes in our schools, in our neighborhoods, in our communities, was a hero who could cover both the ground of the social and the legal,” she said.

Washington, president of Duke’s Black Student Alliance, who is pursuing a double major in English and African and African American Studies, questioned the limits of empathy, as demonstrated by Finch’s contrasting attitudes in Mockingbird and Watchman. “If Atticus imagines himself as standing in the shoes of Tom Robinson, then how is he able to subject him to second-class citizenship?”

Bartlett, the A. Kenneth Pye Professor of Law, lamented the quality of writing in Watchman, but said that it serves as a kind of answer to Washington’s question, delving deeper into the questions of racial equality that arise in situations with less explicitly high stakes than in Mockingbird, where a wrongfully accused black man faced lynching before being killed while trying to escape prison.

“What Watchman seems to do in our time is say, ‘Wait a minute, it’s not so easy to be non-racist. Wait a minute, you think you’re enlightened, but think again,’” Bartlett said. “We can no longer identify Atticus as our hero, and say ‘I’m going to live my life this way.’ It’s much more complicated and much more difficult, and we are all much more limited in what we understand about race from our various perspectives than we may think.”

Holloway said the event was a good example of interdisciplinary discussion on an important set of topics.

“This is just the best of Duke, when its faculty and its students, graduate, professional and undergraduate can come together in conversation,” she said.  “So I love this moment because it emblematizes what we do best at Duke.”

The event was sponsored by the Duke Law Center on Law, Race and Politics, the Program in Public Law, the Duke Council on Race & Ethnicity, the Black Law Students Association and the Black Student Alliance.