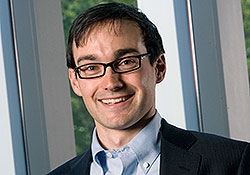 Blocher, whose research agenda also includes the Second Amendment, capital punishment, and property, was delving into meaning as a component of speech, when he teamed up with Mark Tushnet of Harvard Law and Alan Chen of the University of Denver Sturm College of Law to write Free Speech Beyond Words: The Surprising Reach of the First Amendment (New York University Press, 2017). “We realized we were all working on related problems — Mark on non-representational art, Alan on instrumental music, and me on nonsensical speech,” Blocher said. “And we were all coming up with an uncomfortable conclusion, which is that while each of those subjects is clearly covered by the First Amendment, it’s very difficult to say why.”

Blocher recently talked to Duke Law Magazine about the trio’s efforts to fill this gap in First Amendment doctrine and theory — “to give intellectual heft,” he said, to answers that seem intuitive.

Duke Law Magazine: What is the commonality between non-representational art, instrumental music, and nonsensical speech as forms of communication?

Joseph Blocher: All three can express something important, but don’t necessarily do it in a way that involves meaning in a traditional sense. Put in another way: non-representational art, instrumental music, and nonsense can all be quite expressive, but not in ways that fit comfortably with the typical rationales for protecting speech.

DLM: Why is it important to drill down further into how and why these forms of expression are covered?

JB: As a practical matter, a lot of everyday expression doesn’t contain articulable ideas as such. We communicate with one another through gesture, through tone, through rhythm and rhyme, and it’s very important to know whether those methods of expression are covered by the Constitution. We think they are.

DLM: What got you working on nonsensical speech in the first place?

JB: I had been very interested in the concept of meaning — how words convey or don’t convey meaning. So I had been reading a lot of philosophy of language to get a handle on that problem, and it became clear how many of the issues translate almost directly into the legal context. As lawyers, we constantly deal with words and their meaning and need to understand where everything comes from. And that’s especially true in the First Amendment, where speech is the central concern. If speech is about conveying ideas, what about expression that doesn’t transmit any particular meaning at all?

DLM: What are some examples of this sort of nonsensical speech?

JB: A few that would be familiar to people are the poem “Jabberwocky,” the song “I am the Walrus,” and, in the law, the “Bong Hits 4 Jesus” case. Those aren’t expressions which in any way convey a particularized message, but I think intuitively most people regard them as speech. And I think they’re right.

Bong Hits 4 Jesus was a 2008 Supreme Court case called Morse v. Frederick in which the justices upheld the suspension of a high school student who held up a banner at an off-campus event with that message. The majority said that the words could be understood as a pro-drug message. The student and the dissenting justices said that it’s just nonsense, not advocacy. He just had a sign, and when you parse it, the words don’t make a lot of sense.

So those are just a few examples of ways that these sorts of questions can come to court.

DLM: Why do you ultimately favor a “use-meaning” approach to assessing what forms of nonsensical communication might be covered.

JB: There are at least two ways to think about how a word can have meaning. One is that it can represent an idea. We call that representational meaning. The other is that words get meaning just based on how they’re used. That’s use-meaning. And I think use-meaning better captures what the First Amendment is all about. Speech, including the Constitution’s version of speech, is a social practice. It’s something you do with other people. So the use is the thing.

DLM: In the last chapter, you speculate on the potential reach of this line of analysis, to such forms of expression as dance, video games, data, and even cooking.

JB: Form and context are what we care about. Although we’re using a lot of high theory, in some respects, we are arguing that these are questions that have to be answered closer to the ground than free speech scholars sometimes do. We don’t think it’s a question just for armchair contemplation — whether, for example, cooking counts as free expression. You have to consider the social context of it: What does it mean in people’s lives? The same is true for dance, video games, and other things that sometimes come before the Court.

Whether dance or cooking or sports get classified as constitutional speech depends in large part on whether and how the government tries to regulate them. And sometimes it does! So it’s not inconceivable to me that some of those things will, perhaps increasingly, result in First Amendment holdings, and then we hope that we’ll have given a better structure for courts and scholars to justify the conclusions that most people already believe to be right.