Blueprint for Success: 1Ls get an early start on job searches at Career Center’s networking event

First-year Duke Law students got a jump start on their 2L job searches at the Career Center’s “Blueprint for Success” networking event, held March 4 at the Durham Convention Center.

More than 175 students used the opportunity to introduce themselves to lawyers and recruiters from 35 top law firms and 10 government and public interest law offices, and to learn about specific practice areas and locales.  The interviewers, who included 87 Duke Law alumni and 11 more Duke University graduates, also appreciated a chance to meet prospective summer associates in advance of the 2L recruiting season for 2015. 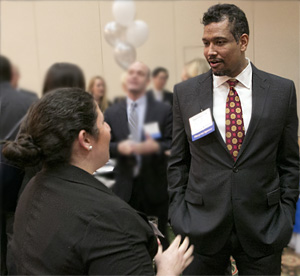 Miguel Eaton ’06, an associate at Jones Day, talks to a first-year student. »View the photo gallery

“I think it’s great for students to have this kind of warm-up before they do screening or on-campus interviews as rising 2Ls,” said Miguel Eaton ’06, an associate at Jones Day in Washington, D.C., who focuses his practice on complex ERISA litigation and employee benefits matters. “And it’s great for me, as someone who does on-campus recruiting at Duke to meet some people beforehand. I’ll remember them when I’m looking through resumes before I come to Durham for on-campus interviews.

“Salespeople say that you need a minimum of three to five meetings with someone before you’ll get business from them,” he said. “That’s analogous to law firms. I will already have met some students at the Blueprint event and when I meet with them a second time in the fall, it will be twice as many meetings as we would have had otherwise.”

Eaton added that he and his three colleagues, who included Jones Day’s Columbus, Ohio-based hiring partner and the firm’s manager of law school recruiting, have forwarded subsequent emails and resumes submitted by promising recruits who expressed interest in specific offices and practice areas to the relevant hiring partners who will interview at Duke during OCI.

“That way, the interviewer will be able to say, ‘I saw you talked to Miguel at the Blueprint event in the spring,’” Eaton said. “It usually leads to good things.”

That’s exactly the rationale behind the annual Blueprint for Success event, said Director of Recruitment and Employer Relations Adriane Kyropoulos. “In surveys, more than 40 percent of graduating law students report they are going to work for an employer where they made contact with an individual well in advance of their formal 2L job search.”  The networking event attracted “a critical mass” of employers and interviewers who recruit at Duke with a view to meeting them informally and discussing their practices and areas of expertise, she said.

Prior to their informal meetings in a ballroom, employers in attendance were briefed on the 1L class and on Duke Law’s curriculum and faculty by Senior Associate Dean for Faculty & Research Curtis Bradley, the William Van Alstyne Professor of Law and Professor of Public Policy Studies, and Associate Dean for Career Services Bruce Elvin ’93.  For the students: a crash course on how to network effectively from professional coach Mary Crane.

“Throughout your professional life, you are going to have one networking event after another, and it is critically important for you to show up and participate,” Crane said in opening her presentation. She emphasized the importance of introductions, suggesting that students introduce themselves to prospective employers with both their names and a succinct summary of their interests. “Start thinking about your introduction as your own 30-second commercial,” she said.  “Your number one goal is to become memorable.”

Crane also advised students to set specific goals for every networking event, and to engage in advance research on organizations and individuals attending in order to facilitate success. “I hope you researched the law firms and some of the individuals who are going to be present here,” she said. “You should have identified the number one, two, and three organizations you want to see.  You should have questions prepared.” Offering advice for breaking into and exiting conversations adroitly, Crane noted the importance of follow-up to effective networking.

“Make notes about every single one of the conversations you had and of everything you learned,” she said. “If you had meaningful conversations, follow up with a thank-you note.  It will take 30 seconds to write, and it will pay dividends. It will help you become memorable.”

Morgan Abbott said she found two pieces of Crane’s advice immediately useful: asking for an employer’s business card as a way to exit a conversation and open the door to a later exchange; and networking with a “buddy” with similar goals in order to maximize contacts at an event.  Abbott, who plans to practice law in her hometown of Raleigh, partnered with a classmate who also aims to stay in state.  “We tag-teamed and worked together, and it made the event much easier and more enjoyable.”

Abbott, who will spend her 1L summer at Smith Anderson in Raleigh, was grateful for the chance to meet lawyers from a number of other top firms with area offices at the Blueprint event.

“It gave me an opportunity to learn about a firm’s culture, about its environment, and gave me an opportunity to find out who I might connect with,” said Abbott, who founded and built an international nonprofit organization while an undergraduate at the University of North Carolina-
Chapel Hill. “It gave firms a chance to feel me out a little bit, too.”  Abbott’s follow-up communications have yielded invitations to visit firms in Raleigh and Charlotte, and offers of introductions to firm members who weren’t in Durham to network.

For 1L Adrienne Dahrouge, who is leaning towards practicing criminal law as a prosecutor or in another public interest capacity, the Blueprint event gave her a clearer sense of her options. “I spoke with several different attorneys who worked for the government - some in capacities I would never have thought of, like an attorney working for the [N.C.] Department of Justice as counsel for a state psychiatric hospital,” she said. “I made helpful contacts and gained useful information.” A federal public defender who Dahrouge spoke to also connected her with a colleague in the Mecklenburg County Public Defender’s Office, where she may take a summer position.

Thomas Hiner ’89, the New York-based hiring partner at Hunton & Williams, confirmed that he found the event both useful and enjoyable.

“Dean Elvin and Professor Bradley gave a very informative presentation about the state of the law school and of the 1L class (very impressive),” he wrote in an email. “The students in the class are even more impressive in person.  They were, of course, very intelligent but they are a very engaging group.  I am looking forward to seeing many of them again at OCI in August.”