For Curtis Bradley, publication of The Oxford Handbook of Comparative Foreign Relations Law — of which he is editor — represents the culmination of a five year scholarly effort and the realization of a lofty goal: to lay the groundwork for a new field of study and teaching. 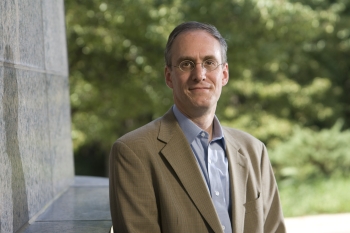 “I have been writing about and teaching U.S. foreign relations law since I started in academia more than 20 years ago, and I have become increasingly interested in the extent to which other countries face similar issues to those that we think about here, including how much authority to distribute between the legislative branch and the executive branch in handling foreign relations,” said Bradley, the William Van Alstyne Professor of Law and Professor of Public Policy Studies. “This project stems, in part, from my desire to learn more and find out whether there were comparisons and contrasts that would be interesting.”

A founder and co-director of Duke’s Center for International and Comparative Law, Bradley’s scholarly expertise spans the areas of international law in the U.S. legal system, the constitutional law of foreign affairs, and federal jurisdiction, and his courses include International law, Foreign Relations Law, and Federal Courts. In addition to directing the Duke-Leiden Institute in Global and Transnational Law for the past two years and serving on the executive board of the Center on Law, Ethics, and National Security, he is co-editor-in-chief of the American Journal of International Law (AJIL) and served as a reporter on the American Law Institute’s Restatement of the Law Fourth, The Foreign Relations Law of the United States, which was published last November. He is also a longtime member of the Secretary of State's Advisory Committee on International Law.

After confirming that the topic was, indeed, ripe for exploration with a July 2015 conference of scholars from the United States, Canada, and Europe that he organized in Geneva (where the Law School’s summer institute was then located), Bradley crafted an ambitious proposal for a global project that would help define and develop the relatively new field of comparative foreign relations law. Subsequently named an Andrew Carnegie Fellow by the Carnegie Corporation of New York, he used his award to help fund an annual series of conferences — held respectively in Tokyo, Pretoria, South Africa, and Leiden — where leading international experts gathered to discuss related issues. They also workshopped draft papers, many of which are now among the book’s 46 chapters.

The result, which runs almost 900 pages, is divided into sections that offer a mix of theory, comparative empirical analysis, and country-specific case studies on such topics as entering into and exiting treaties, using military force, extending or refusing immunity to foreign governments and their officials, the impact of federalism on foreign affairs, and the practices of non-nation, supranational bodies like the European Union. An introductory section examines the nature of foreign relations law as a field: how to define it, where it might be going, and areas where scholars, foreign ministry lawyers, and others could benefit from understanding the similarities and differences between the practices of different nations.

“The handbook reflects a lot of dialogue between the authors of the various chapters who were meeting at our conferences, and they often draw connections to what they found in one another’s work,” said Bradley, adding that the project’s collaborative nature enhanced its overall quality.

Advance praise heralded the book as the first work in this new scholarly sphere.

“This Oxford Handbook is the first truly comparative effort in the field of foreign relations law,” wrote Helmut Aust, professor of law at Freie Univeristät Berlin. “The result is a tour de force, a reference work that is innovative in its theoretical and conceptual approaches as well as diverse in the positions individual contributors take.”

Bradley, who wrote the book’s preface and a chapter on U.S. war powers and the potential benefits of comparativism, also contributed an introductory chapter that defines foreign relations law and traces its development in the U.S., where it is a well-established field.

“The field is not very developed in most other countries, but there is an increasing interest in teaching and writing about it, so we wanted to describe it,” said Bradley.

Foreign relations law is not international law, although the two frequently intersect, he said. “It’s much more about domestic law and issues about distributing authority between the executive, the legislature, and the courts. If it’s a federal government like that in the U.S., Canada, Switzerland, or Germany, there are also vertical issues between the national government and the state governments in their dealings with the rest of the world. And there are also issues about the status of international law internally within each of these countries and how that might be similar or different.”

The legal materials that make up a nation’s foreign relations law can include, among other things, constitutional law, statutory law, administrative law, and judicial precedent, he said. “In my first chapter I point out the importance of comparative study in this area — it can allow us to better understand the foreign relations practices of other countries. Because each nation structures these things differently and has its own set of legal issues and legal environment, it’s important for lawyers in foreign ministries and departments of state, for example, to have a sense of what their counterparts’ authority might be.”

He pointed to the laws and practices relating to the making and termination of treaties as one that varies country-to-county, particularly regarding the parameters of executive authority to do so. “And there is some movement in the law on that topic internationally,” he said, noting the 2017 ruling by the Supreme Court of the United Kingdom ordering the Prime Minister to seek parliamentary approval to exit from the European Union treaty in spite of the country’s tradition of executive supremacy in foreign affairs. A South African court similarly ruled against that country’s executive in its efforts to exit the International Criminal Court treaty without legislative approval, and the issue has particular currency given the Trump administration’s actions to the withdraw the United States from a number of international agreements.

“But the president’s authority to do so has not been fully resolved in U.S. courts,” Bradley said. “I think litigants might invite the Supreme Court to consider — as instructive, though not as binding — that some major courts in other countries have faced similar issues recently and have found it important to keep the legislatures involved.”

In his chapter on war powers, Bradley highlighted Germany as offering a useful contrast to U.S. law and practice, which have frequently diverged when presidents have perceived a need to intervene abroad. “It’s a messy area of law for the United States, because the Constitution seems to suggest that the legislature has predominant control, and the War Powers Act, passed near the end of the Vietnam War, also seems to insist that Congress has a major role in deciding whether to use force,” he said. “But in practice, successive presidents since World War II have often used military force without going to Congress. And U.S. courts have generally declined to hear cases challenging presidential military actions.”

The War Powers Act, too, uses terms “that are too easily avoided,” he added. “For instance, it only gets triggered when we go into ‘hostilities.’ A few years ago, the Obama administration said it was not bound by the statute because in merely bombing Libya we weren’t in hostilities because they couldn’t bomb us back, an argument a lot of people thought was not very persuasive, but the courts weren’t involved.” In Germany, by contrast, courts regularly look at the executive’s power to use force and the war powers statute is more tightly drafted. “It says, basically, that any time you move your armed forces into an area in which there is any kind of conflict going on the parliament has to be involved.”

“I think that if we ever tried to revise the U.S. war powers statute,” Bradley noted, “it would make good sense to look to countries that have tried to do better at drafting.”

Bradley received an enthusiastic response to the project from the dozens of contributing scholars. He specifically commended the contributions made by two of his Duke Law colleagues: Alston & Bird Professor Ernest Young, whose chapter on U.S. federalism and foreign affairs, Bradley said, will be highly instructive to lawyers in foreign ministries, among others; and Harry S. Chadwick, Sr., Professor Laurence Helfer, whose chapter titled “Treaty Exit and Intrabranch Conflict at the Interface of International and Domestic Law” brings in insights from regions such as Latin America, where courts have, on occasion, mandated a country’s treaty withdrawal.

Helfer, who co-directs CICL and serves as AJIL co-editor-in-chief with Bradley, was deeply involved with the project from the beginning. “He was at every conference and helped advise me throughout,” Bradley said. “He’s been a great collaborator.”

Helfer, an expert in the areas of international law and institutions, international adjudication and dispute settlement, human rights, and international intellectual property law and policy, praised Bradley’s stewardship of the project.

“In developing the chapters for the Oxford Handbook, Curt reached out to countries beyond the United States and the handful of European countries that scholars usually study,” he said. “The result is a much richer and more comprehensive account of how foreign relations law is practiced and studied by a wide range of governments.”

Helfer added that he emerged with an enriched understanding of a familiar topic.  “Although I have extensively studied the international law of treaty withdrawal, I never considered the foreign relations dimensions of the topic, in particular which branches of government decide whether and how states exit from international agreements.”

Two launch events that were attended by contributors and other interested scholars followed The Oxford Handbook’s spring publication: one in London on June 28 at the Center for Transnational Legal Studies; and a panel discussion on July 2 at the Duke-Leiden Institute in Global and Transnational Law, where Bradley taught a course on comparative foreign relations law with Joris Larik of Leiden University, an expert on the external relations of the European Union and a contributor to the project.

“It isn’t just a book,” Larik said at the event. “It’s really something quite new, something that defines a new field of study that wasn’t there before.”

Panelist David Stewart, a professor at the Georgetown Law Center whose chapter on international immunity was informed by his long career in the U.S. Department of State, said that a comparative approach is crucial for effective diplomacy.

“If you want to negotiate and come to agreement with other countries, you need to try to put yourself in the other person’s shoes — to understand their system, why they are approaching something the way they do. If you want to achieve an agreement, say a multilateral agreement, it really is important to understand what the approaches are of various governments around the world, why nations want to do something a certain way.”

As he wrote in the preface and reiterated at the launch events, Bradley sees the book as only the initial foundation for a new field of teaching and scholarship. “We view this as the very first stage of the development of this area of study, not the final stage by any means, and not the last word,” he said in The Hague. “I am actually quite interested in seeing how this develops. There’s a lot we don’t yet know about the foreign relations laws of many countries and certain regions, particularly in a deep sense.”

He also hopes to see the development of new approaches to empirical work in the field. But he is satisfied that his initial mission has been accomplished, and others agree.

“This is the book on which comparative foreign relations scholars will build their future work,” wrote Ashley Deeks, E. James Kelly, Jr. — Class of 1965 Research Professor of Law at the University of Virginia.