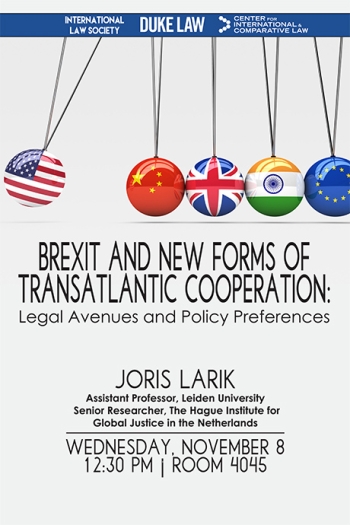 Joris Larik, Assistant Professor at Leiden University and Senior Researcher at The Hague Institute for Global Justice in the Netherlands, will discuss "Brexit and New Forms of Transatlantic Cooperation: Legal Avenues and Policy Preferences."  The European Union, alongside NATO, used to be a steadily expanding feature of Transatlantic cooperation for more than half a century. However, “Brexit” and other developments have rocked the Atlantic space in a way that few observers would have anticipated less than two years ago. Today, the Transatlantic Trade and Investment Partnership (TTIP) is “on ice”, while the UK and EU are involved in acrimonious withdrawal negotiations.  In order to find a way forward, it is time to explore the whole range of politically palatable and legally feasible modes of Transatlantic foreign policy cooperation that can work for the US, the EU, and the UK. In this talk, Joris Larik will argue that it is a gross oversimplification to conceive of transatlantic relations post-Brexit as a “new” US-UK relationship next to the pre-existing US-EU relationship. Instead, “Brexit” entails a recalibration of some of the many existing and interdependent triangular relationships the United States maintains with the EU and its Member States. Focusing on trade and security as salient case studies, the lecture will delve into existing and proposed forms of collaboration that go beyond the traditional the paradigm of full EU membership. Examples include third countries associating themselves with EU civil-military operations and ad hoc arrangements building on the experience of the P5+1 (also known as E3+3) in the negotiations that led to the Iran Nuclear Deal.

This lecture is co-sponsored by the Center for International and Comparative Law and the International Law Society. Lunch will be served. For more information, please contact Ali Prince.

Joris Larik is Assistant Professor at Leiden University and Senior Researcher at The Hague Institute for Global Justice in the Netherlands. Moreover, Joris is one of the contributors to the forthcoming Oxford Handbook on Comparative Foreign Relations Law edited by Curtis Bradley and will be teaching a course on foreign relations law at the Duke-Leiden Institute in Global and Transnational Law in 2018.

Joris is currently a Fulbright-Schuman Fellow at the Johns Hopkins Paul H. Nitze School of Advanced International Studies in Washington D.C., working on his new project “Forms of Foreign Policy Cooperation in the Unraveled Transatlantic Space”. His research has been acknowledged with several awards, including NATO’s Manfred Wörner Essay Award (2008) and the Mauro Cappelletti Prize for the Best Thesis in Comparative Law at from the European University Institute (2014). Among his publications are Foreign Policy Objectives in European Constitutional Law (Oxford University Press, 2016) and ASEAN’s External Agreements: Law, Practice and the Quest for Collective Action (Cambridge University Press, 2015).