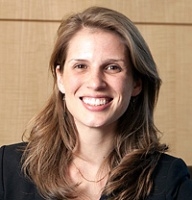 Caitlin Swain ’12 has received a Skadden Fellowship to provide legal support to grassroots organizations in North Carolina that work with at-risk youth to enforce their constitutional right to a quality education.

The highly competitive two-year fellowship will support Swain’s work for the Advancement Project, a policy, communications, and legal action organization based in Washington, D.C., that focuses on facilitating community-based racial justice initiatives. Local partner organizations for Swain’s project, which targets the systemic under-education of poor students of color, include Advocates for Children’s Services, a statewide project of Legal Aid of North Carolina, and the NAACP at both the state conference and local levels.

“The opportunity is incredible,” said Swain, who worked in human rights for five years before coming to Duke Law.  “For me, this project made sense for many reasons.  It combines both my interest in education, which was a driving passion for me before I came to law school, and my interest in criminal justice issues into a practical legal focus: working to end the school-to-prison pipeline.

“I feel really lucky to be able to work on a project that I feel this strongly about with the Skadden Fellowship Foundation’s backing,” she added.  “Skadden invests in young practitioners and gives you the opportunity to see a project through from beginning to end, through their two year funding commitment.  Their emphasis is on broadening access to good legal representation for all people, especially people living in poverty.  And North Carolina, like many states and particularly across the South, needs that kind of investment.”

Swain laid the groundwork for her Skadden-supported project when she worked on racial and educational equity matters at the Advancement Project during her 2L summer. Her research focused on high-stakes testing, which she found promotes an educational system that sets many children up for failure. As she noted in her Skadden application, Swain heard from students who were placed into educational tracks where they failed to receive adequate academic services, who were denied access to honors classes for non-academic reasons, faced unreasonably harsh discipline practices, and attended schools that lacked basic resources and supplies.  Collectively, these factors contribute to low graduation rates for minority children — and produce a significant graduation gap between minorities and white students, she said. In January, the Advancement Project will release a report stemming from Swain’s summer work.

The project led to other conversations about discipline issues, school-to-prison pipeline issues, and broader equity questions. The North Carolina constitution grants every child the fundamental right to receive a sound basic education, but “students’ opportunities to learn remain definitively stratified by race and class, where, across the state, one in four Blacks and one in three Latinos live below the poverty line,” Swain wrote in her application, pointing to particularly pronounced disparities in Charlotte, Durham, and Raleigh, where she will focus her efforts.

Swain’s project builds on work the Advancement Project is doing in other states, she explained, and will bring national best practices to bear in creating local solutions and focusing on enforcement of state and local law. Her efforts are likely to result in a multi-pronged approach to a solution which may include filing Title VI administrative complaints, initiating litigation to effect change in the law, or developing initiatives geared to public education and strategic communications.

“We couldn’t be more delighted to have Caitlin coming on board permanently in September,” said Alexi Nunn Freeman, an Advancement Project staff attorney who specializes in educational equity. “During her summer internship she wowed everyone in the office both with her tangible legal skills and her innate ability to understand the strategies for pursuing racial justice. I really think Caitlin will be the perfect person to explore a multifaceted advocacy approach to make sure that those who are most impacted — youth, parents, etc., have a voice in the decision-making processes of their schools and have a voice in ensuring that inequitable policies are no longer affecting them.”

A record of sustained service

A graduate of Wesleyan University, Swain said she has been greatly influenced by her father and late stepmother, both civil rights attorneys who offered models for “how to be responsive to your clients and think big, but remain grounded in the practical aspects of the law.”

Prior to her arrival at Duke, Swain worked for the NAACP in North Carolina and the Kentucky Commission on Civil Rights, focusing on domestic issues through a human rights lens. She brought that commitment to Duke, where she has co-chaired the Human Rights Law Society and participated in two ambitious seminars relating to international human rights: an ad hoc seminar that involved students in developing statutory provisions to reform Haitian laws pertaining to domestic violence and violence against women; and Human Rights Advocacy, through which Swain helped draft bylaws for a human rights commission for Iraq. She also worked on international criminal law and domestic civil rights issues at the Center for Constitutional Rights in New York during her 1L summer, and she has taken classes in education, nonprofits, and AIDS law.

But it has been her work in wrongful convictions and criminal justice policy while at Duke that has most informed her passion to ensure that every child has access to quality education in North Carolina, she wrote in her personal statement to the Skadden Fellowship Foundation. Now serving as the student director of the Innocence Project, an organization with a current membership of more than 90 student volunteers, she earlier served as an investigator, outreach coordinator, and training director, and was a member of the Wrongful Convictions Clinic as a 2L.  Her ongoing work on behalf of a client wrongfully incarcerated, to date, for almost two decades for murder, has particularly inspired her and keeps her focused on the people most directly impacted in North Carolina.

“Caitlin is the ‘real deal’:  dedicated, intelligent, organized, visionary, practical, compassionate, diligent, and extremely hard-working,” said Clinical Professor Theresa Newman ’88, who serves as faculty adviser to the Innocence Project and co-directs the Wrongful Convictions Clinic.  “She has thoughtfully developed ideas about justice and the power of the law to assist in correcting inequities, and she has a proven record of being able to educate and organize others to join the efforts she undertakes. She also is a consummate organizer, with a genuinely compassionate other-centered approach. She is keenly and perhaps uniquely suited for the kind of work she will be doing with the Advancement Project.”

Susan Butler Plum, director of the Skadden Fellowship Foundation, said she was impressed by Swain’s “energy, intensity, commitment, compassion, and focus” throughout the rigorous application and interview process.  “Those are all things we’re looking for,” said Plum.  “The fact she had worked in Appalachia for a few years between college and law school was interesting to us, as was the fact that she understood that in some inner city communities the school is the only light on.” Education can be seen as “the final frontier” of the civil rights movement, Plum added.  “Many top applicants have wanted to work in this area, and we believe in early intervention, which means you’ve got to attack inequities in education.”

Swain credits Duke’s unique culture and community of peers, faculty, administrators, and alumni for providing her with the opportunities and support she needed to pursue her interests, academically, professionally, and personally. She calls Associate Dean for Public Interest and Pro Bono Kimberly Bart ’02 “an amazing adviser.”

“She’s thinking about individual plans for students from the moment you step in the door and made me feel when I first came to Duke that there was a place for me,” Swain says.  She also praises the support she received from Dean David F. Levi for her application to the Skadden Fellowship Foundation and his overall commitment to promoting public interest initiatives.

“I know my fellowship represents another culmination of his investment efforts in public interest at Duke Law, which include an investment in clinical offerings for human rights, a sustained commitment to the Wrongful Convictions Clinic and the Innocence Project, and a commitment to securing summer funding for students who want to pursue public interest work.  I benefitted personally from all of these efforts.”