The report makes key findings relating to the use of suspension in the state’s charter schools and recommends areas for further study and data collection. 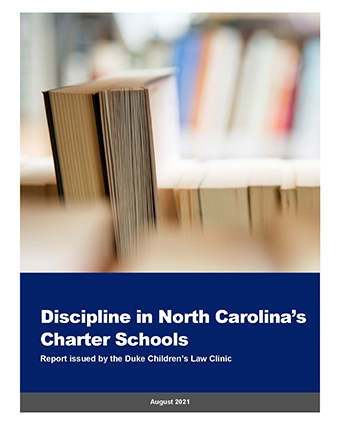 The Children’s Law Clinic has released a new report that sheds light on discipline trends in North Carolina’s charter schools.

Clinic students Ryan Yang ’21 and Richard Yang ’22 drafted the report under the supervision of Supervising Attorney Peggy Nicholson. They were interested in exploring how the use of exclusionary discipline, such as suspension, negatively impacts students, especially students of color, and in reading about public school discipline in North Carolina, they realized there was very little information on charter school discipline despite the growing number of students attending charters.

“Although people have started paying more attention to the use and impact of exclusionary discipline in North Carolina’s public schools, most of the current analysis has only focused on overall state trends or on traditional public schools,” said Ryan Yang. “Given the lack of research on charter school discipline in the state, it felt important to pay specific attention to the discipline policies and practices of North Carolina’s charter schools.”

“Despite having very little experience working with this type of data, Richard and Ryan jumped right in to this project and were able to identify key trends as well as gaps where more data collection, publication, and analysis were needed,” said Nicholson. “This report is an important contribution to the conversation on school discipline in North Carolina.”

In addition to its findings, the report makes several policy recommendations directed at the State Board of Education and N.C. Department of Public Instruction, the state agencies that oversee charter schools. These recommendations, which focus on improved data collection and increased oversight for charter school discipline, would help ensure that the state’s charter schools have discipline practices that are transparent, effective, and promote good student outcomes, the report states.

“The most fun part of this project was that, apart from all the legal research and analysis, we also had the opportunity to do a significant amount of data collection and analysis. This was very challenging, but turned out to be totally rewarding,” said Ryan Yang.  “All in all, working on this policy-driven project was an amazing experience for me.”