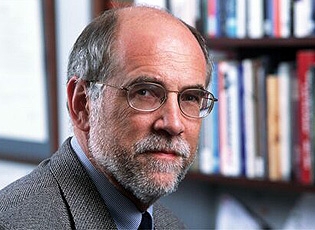 Christopher Schroeder has returned to Duke Law School after serving, since April 2010, as assistant attorney general for the Office of Legal Policy in the Department of Justice. It is a familiar transition for Schroeder, the Charles S. Murphy Professor of Law and Public Policy Studies, a scholar of constitutional law and environmental law and regulation, who served as acting assistant attorney general in the Office of Legal Counsel during the Clinton administration and earlier served as chief counsel to the Senate Judiciary Committee.

“I’ve come back from this most recent experience even more strongly convinced that the message I want to send to students is to really seriously think about public service. The number of extremely intelligent career civil servants there are in the DOJ is very uplifting. You may become one of them, or maybe you’ll do it for a few years and go back to practice with a sense of accomplishment and a very different perspective on the issues.”

Schroeder, who co-directs the Program in Public Law, talked with Duke Law Magazine about his latest foray into government service and his transition back to the academy.

Duke Law Magazine:  What sorts of matters were you handling at the OLP?

Schroeder: The office is relatively small, about 28 lawyers. About 25 percent of its bandwidth is devoted to the judicial nominations process; we vet all of the president’s judicial nominees for the federal court. Another 25 percent is devoted to handling the administrative work of the DOJ, so any rules and regulations that the department issues come through our office. The remaining 50 percent or so runs a very broad spectrum, and is largely determined by what is important to the attorney general and the deputy attorney general at any point in time.

During my time with OLP we invested a lot of time exploring sensible firearms regulations for instance. A lot of that work provided the foundations for the president’s recent proposal. We worked with other components of the Department to build trusting relationships with Arab and Muslim communities. We also put a lot of energy into examining existing surveillance authorities, many of which were written before email was so prominent, before people had cell phones with GPS devices, and before social media became such an important method of communication for so many people. Eventually that whole suite of domestic surveillance and information-gathering authorities is going to have to be modernized, and the OLP has been right in the middle of the DOJ’s effort to figure out what our suggestions are going to be when that legislation begins to move.

DLM: What areas of firearms regulation did you work on?

Schroeder: I’ve spent a lot of time specifically on issues related to guns crossing the border into Mexico, where we have faced a number of obstacles. Improving the background check system was another area.  Presently, sales can be done privately that don’t go through a background check system at all. And then when they do go through a background check, there are straw purchasers — someone perfectly qualified to buy a firearm if they are buying it for themselves, who will hand it off, and then it may get shipped off somewhere. We don’t have as effective an enforcement regime for straw purchasers as we ought to. So we’ve been working on some legal proposals to increase the ability of prosecutors to go after those folks.

Right now, the kind of circumstantial case you can build against a straw buyer is often viewed by the courts as a paperwork mistake: You’ve lied on a form. It is very hard to get some courts to see this as a spigot through which a very serious problem gets started. If you could put more weight behind the prosecution of straw buyers, you’d get prosecutors to spend more time on them, and you can start using them to go up the chain to get to the people you’d really like to get hold of. Essentially, President Obama has proposed a gun trafficking law with stiffer penalties for anyone engaged in the enterprise, instead of cobbling together these minor offenses, where a straw buyer is penalized for lying on a form, but not much else. That approach came out of one of the working groups in the Department.

I can see the lineage in the president’s proposal of much of the work that was underway at the Justice Department during my tenure. Some things were outside of our bailiwick, having to do with Health and Human Services and mental health issues. But we worked on practically everything else, so that was very rewarding. Now we’ll see if the parts that have to be enacted will make it through Congress.

Newtown changed everything. There is something qualitatively different about the specter of 20 six- and seven-year olds riddled with theses massive holes that a .223 shell generates. None of them were hit just once.  And in the aftermath, it became clear that the impact of [the massacre] was just huge. So we’ll see.

I think this time some proposals will come up for a vote, and we’ll see what happens. I get the sense that support is very broad. The NRA always had the advantage of having strong, very deep, support and for the last 25 years, its leadership has had a strategy of never giving an inch and demonizing anyone who tries to compromise. But Newtown may have changed how moderate gun owners and pro-regulation people feel, that they now feel just as strongly about taking sensible steps, about keeping a firearm and a dangerous person separate. Some of that, at least, can go on the regulation side. Some of it has to do with identifying dangerous people, with is complicated, and which we’re not very good at. But the idea that you can’t stop everything probably will no longer be a viable argument against doing what you can to stop what you can.

DLM: What kind of work did you do with Arab and Muslim communities?

Schroeder: Making sure the DOJ has the right policies and partnerships in place with state and local law enforcement to ensure those communities are treated fairly under our civil rights laws and anti-harassment laws. Seeing that hate crimes, where they arise, are being prosecuted. And trying to build constructive relationships with those communities so that we’re not dealing with people who are hostile to the effort to try to identify early-warning signals of domestic terrorism, should they arise. Those communities are very concerned about domestic terrorism, but they don’t always trust the federal government because surveillance and monitoring are sensitive topics for any community, and because there have been occasions when individual agents have acted improperly. We’ve gotten, I think a lot better at it during the first term of the Obama administration, but we’re still working on it.  And while the FBI is important to the discussion, so is the local sheriff and the local police department, and the Department of Homeland Security (DHS), specifically the Transportation Security Administration (TSA).  We often bring DHS into our conversations with these communities, because they often voice concerns about the TSA.

National security issues are pervasive in Washington now.  They affect how you think about everything. Post-9/11, the world did change at the level of how the government sets priorities. The FBI is a totally different organization now in its orientation towards counter-intelligence, counterinsurgency, all national security issues. There is a brand new national security division in the Justice Department with 700 or 800 lawyers that didn’t exist in the ’90s.

DLM:  How does your government service affect your research and teaching agenda?

Schroeder: I get my batteries recharged when I go work for the government. I develop new ideas about what I want to write about and teach.

I have worked primarily on presidential powers issues in my scholarship, largely stimulated by the time I spent in the Office of Legal Counsel back in the Clinton administration. And I now intend to do some writing on surveillance and GPS tracking issues that are definitely traceable back to issues I worked on in OLP. Each time I’ve come up with new interests new ideas, and I’m raring to get my thoughts on paper and teach new classes.  It’s a real energizing experience.

I do enjoy teaching, and this time I was able to keep it up to some degree by participating in the Duke in D.C. seminar. The course that Ted Kaufman and Jeffrey Peck were teaching [last spring] was called Federal Policymaking, and I concentrated mostly on issues that involved the executive branch, the way it interacted with Congress, the way it makes rules, and the administrative process.

DLM: What is your advice to Duke Law students considering government service?

Schroeder: I strongly encourage students to consider public lawyering as part of a career. It’s very ennobling and perspective-enlarging to be working for the people of the United States.

You don’t have to think about it as your entire career.  But if you have two to five years of practice on your resume and you’ve worked in an area that has relevance to the DOJ Civil or Criminal Divisions, or you can work at a firm and then get into a U.S. Attorney’s Office, that’s probably a good path to pursue. And I’ve come back from this most recent experience even more strongly convinced that the message I want to send to students is to really seriously think about public service. The number of extremely intelligent career civil servants there are in the DOJ is very uplifting. You may become one of them, or maybe you’ll do it for a few years and go back to practice with a sense of accomplishment and a very different perspective on the issues.