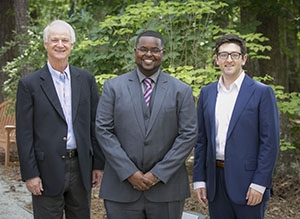 With Durham’s downtown and surrounding neighborhoods undergoing rapid gentrification, its inventory of affordable housing is decreasing at a similar pace. Durham County has the highest rate of eviction filings among North Carolina’s 10 largest counties — about one for every 28 residents — as well as a high level of homelessness.

Clinical Professor Charles Holton ’73, who directs the Civil Justice Clinic, noted that evictions lead to a host of personal and social problems, including homelessness. “An eviction judgment becomes a blot on a credit record, which then impedes an individual’s future ability to lease property, to borrow money, and to get Habitat for Humanity housing, among other consequences,” he said. “And evictions, particularly if sudden or forced, also have significant detrimental effects on the families involved and on communities, in terms of disruption of schools, health care, and family interactions.” Even when it becomes clear that a tenant will have to vacate a leased property, a voluntary move is preferable to a court order, Holton said.

During the spring semester, Holton and Advanced Civil Justice Clinic student Ben Wasserman ’17 designed a process for reducing forced evictions in Durham. The Eviction Diversion Program, on which lawyers at Legal Aid of North Carolina (LANC) also provided input, has been accepted by Durham County court and social services administrators as a pilot program with a projected start date of August 1. Wasserman also wrote a scholarly article on the initiative, which aims to decrease the number of eviction proceedings and judgments, provide increased stability to landlords and tenants, and reduce homelessness.

Having studied an eviction diversion program in Michigan last spring, Holton first assigned a fall-semester clinic student, Bryan O’Brien ’17, to investigate how a similar initiative might work in Durham. As he canvassed available resources, O’Brien found that tenants facing emergencies can apply for funds through Durham’s Department of Social Services, yet due to their lack of awareness, many don’t — and money goes unused. Wasserman, who picked up the project in the spring after handling a fall clinic caseload that included landlord and tenant matters (and also made it the focus of an independent study), said his task was largely to coordinate information and resources through a clear process.

His proposal described a program to help tenants “who uncharacteristically miss a rent payment” to remain in their homes, while landlords secure judicially-supported guarantees of rent payment and avoid the costs of litigation and finding new tenants. As designed, the program could be used to divert eviction at three different points — when the tenant receives a late rent notice, at the time of a summary ejectment filing, and after an adverse judgment — with resources available at each stage to help facilitate a negotiated resolution between the landlord and tenant. As part of the proposal, Wasserman developed a host of resource materials, including an informational brochure directed at both landlords and tenants, intake questionnaires for DSS social workers, and templates for court motions, settlement agreements, and consent orders.

Making landlords and tenants aware of the pilot program’s existence and training social workers to evaluate renters’ eligibility for emergency funds and spot any need for legal assistance are key to its success, Holton and Wasserman agree.

Jesse McCoy II, who joined the Civil Justice Clinic in April as the inaugural James Scott Farrin Lecturing Fellow and supervising attorney, will play a substantial role in implementing the pilot Eviction Diversion Program. A veteran LANC attorney, he has extensive experience with landlord-tenant disputes in Durham County.

In addition to raising awareness among renters facing temporary setbacks that financial help may be available and helping avert the potentially disastrous collateral consequences of forced eviction, McCoy said the program could ease county courts’ workload.

“We anticipate it will ultimately increase judicial efficiency by reducing court docket sizes for eviction through purging cases that can be easily resolved outside of court without need for litigation,” he said. “The reduction in court cases could assist judicial officials in refocusing their attention to more complicated cases involving substandard habitability concerns, unfair debt collections, and other unfair rental practices.”

Wasserman said he is gratified to leave the pilot program as a legacy of his time at Duke Law and in the clinic: “Taking on this project seemed to me like a fantastic way to take what I had learned over the fall semester and make a lasting, positive impact on Durham by implementing a policy change that could potentially impact the lives of thousands of residents.”