Graduates, whose time at Duke Law was marked by the pandemic and social upheaval, were praised for their resilience and charged with using their legal “superpowers” for good. 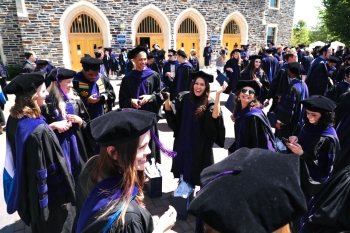 Marking both their graduation and her own retirement from Duke Law, Charles S. Rhyne Clinical Professor of Law Theresa A. Newman ’88 charged the Class of 2021 in her Convocation address to combine hope and action to effect justice and praised their countless acts of compassion and generosity toward others during an a time of extraordinary challenges.

“You met every typical challenge of a rigorous law school education – and it is rigorous – and then somehow you pulled it all out to meet the truly extraordinary challenges of this year,” Newman told the graduates. “I am so very proud of you for doing so, and excited about what you now know about yourselves and what you can accomplish in the future: truly anything.”

The May 15 ceremony in Cameron Indoor Stadium honored 251 JD graduates, 23 of whom also earned a Master of Laws, or LLM, in international and comparative law, and seven of whom also received an LLM in law and entrepreneurship. Eight earned graduate degrees from other departments and schools at Duke University in addition to their JDs, and 30 JD graduates also received the Public Interest and Public Service Law certificate.

Twenty-one graduates of law schools in other countries, representing 14 nations, received the LLM degree, and eight of those graduates received the Law School’s certificate in business law. Three graduates earned the Doctor of Juridical Science or SJD, the highest degree in law.

This year, only Duke Law graduates, faculty, and staff attended the in-person ceremony, though it was webcast for family and friends. Video screens inside the stadium showed graduates who could not attend in person.

Newman: Small acts can collectively “bend the arc” toward justice

Newman, a beloved member of the Duke Law community for more than 30 years, recalled how she entered Duke Law feeling like an outsider, as the oldest member of the class, the parent of two small children, and a first-generation college student “with no lawyers in the family or among our friends, and no real knowledge about law schools or what lawyers even do.”

“Because of all that, I felt quite different and unlikely to succeed,” she said. “Yet, in very quick order, the warmth, generosity, and cooperative spirit of the Duke Law community, which has been palpable even during our social isolation this past year, changed my thinking.

“Over the years since, I have witnessed and experienced other acts at Duke – grand and small – that have shaped me but, more important, have left me more hopeful about the state of things larger than myself. Individually and collectively, these acts have provided evidence that, as Martin Luther King, Jr., said, ‘The arc of the moral universe is long, but it bends toward justice.’”

After graduating with her JD, Newman would go on to a federal clerkship and a civil litigation practice at the Womble law firm in Raleigh before returning to Duke in 1990 where, among other roles, she served as editor and advisor for student journals, director of legal writing, and associate dean for academic affairs.

But she is best known as a leader in the national innocence movement. In 2008 Newman established, along with John S. Bradway Professor James E. Coleman, Jr., the Wrongful Convictions Clinic, which has helped to exonerate 10 men of crimes they did not commit. She serves as associate director of the Center for Criminal Justice and Professional Responsibility and faculty adviser to Duke’s chapter of the Innocence Project, which she and Coleman also helped establish, and was a founding board member of the international Innocence Network as well as a leader in numerous North Carolina justice organizations.

During her address, Newman gave examples of compassion and selflessness she had witnessed during her representation of the wrongly convicted, from a judge who apologized to an exoneree to a client’s refusal to plead guilty, knowing that to do so would allow state misconduct to continue unscrutinized.

And she said that the Class of 2021 had risen to the exceptional challenges presented by the pandemic year, not only by performing selfless, compassionate acts within the Law School, but also through service ranging from fostering animals, tutoring children, and serving food to the needy to campaigning, protesting, and voting.

“Without hope, we are not inspired to take action, and without action, change will not occur. You have done that here, identifying areas of need, imagining possible solutions, and taking action.”

One of the most moving acts she witnessed occurred during a hearing as a clinic client waited to hear whether his conviction would be overturned.

“A student who had worked tirelessly on the case reached out from the bench behind the defense table and simply held his hand on the client’s back,” Newman recalled.

“The room was silent and the tension was almost unbearable, but that student’s simple touch powerfully told our client that, ‘No matter the judge’s decision, we are here. We support you.’ Sometimes that is all it takes to move toward justice.”

As she concluded, Newman said she knew the graduates would “join hope and action, and move forward with optimism. I am humbled – and inspired – by how much good you have done during your short time here.”

LLM class speaker Taisa Brandao Condino, a corporate lawyer from Sao Paolo, Brazil, commended her “brave and resilient” classmates for choosing to begin their studies amid the uncertainties of a global pandemic. Recalling long conversations on WhatsApp, she said the group’s main question was whether they would have a full LLM experience.

And despite classes that were mostly online, limited interaction in person, the oceans separating some students studying in their home countries, and some initial hiccups using technology, “I’m convinced that yes, we did have the full LLM experience,” she said. “We had the opportunity to share different views, question many things, deconstruct ideas, and reframe concepts. More than engaging as students, we had the opportunity to become friends. We made our different cultures become one Blue Devil family.”

Condino concluded by charging her classmates with using their power as lawyers for good. “Never forget who you are and what you stand for,” she said. “Be part of a positive change and help build a world guided in love, respect, and care for each other and the environment.” And she urged them not to forget how they had taken a leap of faith one year ago – and landed on their feet.

“No matter where life takes you from here, just remember how resilient you are and how much stronger you get after overcoming challenges.”

JD class speaker Garmai Gorlorwulu, a leader in numerous student groups who was honored with a Forever Duke alumni award, acknowledged the difficulties many of her classmates had overcome to graduate. Sharing that her own father had died of cancer last fall, she spoke of how the community had often unknowingly helped her through her grief.

“It is so easy for us to focus on the positive final portrait and not talk about the struggles that led us to these moments of celebration,” she said. “Yes, we were resilient, hard-working, intelligent, and so many other things. But we can also acknowledge that we overcame obstacles that were unique, and sometimes, we overcame them silently, under the cover of darkness, and with little recognition.

“Little did many of you know, I was leaning on you all, every day, without many of you fully understanding the gravity of your actions.”

Gorlorwulu praised the class, whose in-person studies were disrupted by the pandemic during the spring of their second year, for showing up in ways large and small: from serving clients through clinic and pro bono work to sharing notes and checking in with each other over coffee. Those actions, she said, maintained the community during a singular time.

“When I look back at my time at Duke Law, I can say that it was worth it, you all were worth it. And I hope that you can say the same. Though we have spent the past few years pushing ourselves to be better each day, Class of 2021, please never forget that each of you is more than the sum of your parts. The world needs you to be who you are, authentically and humbly yourself.

“As I have heard many others say, and as I have said many times in my three years in this community: You are enough.”

Presiding over her second Convocation, Kerry Abrams, the James B. Duke and Benjamin N. Duke Dean and Professor of Law, reminded the JD Class of 2021 that she began at Duke Law at the same time they did.

“We had no idea on that beautiful August morning what was in store for us over the next three years,” she said. “But despite all of the challenges, or, perhaps, because of the challenges we experienced, we have both grown in our respective roles, and it has been a thrill for me to see how far you have come.”

She commended the international members of the LLM class for their commitment to continue their legal education at Duke despite the challenges presented by the COVID-19 pandemic.

“Completing this rigorous course of study in the middle of a pandemic has taken toughness and resolve. Whether you realize it or not, in less than one year, you have come a long way, too.”

Acknowledging the singularity of the times, Abrams said the past 18 months had shown “in stark relief” how many difficult challenges the world faces. And, she said, it has shown how badly lawyers are needed to use their “superpowers” of persuasion, problem-solving, and empathy to help solve those problems.

“You have experienced many of these challenges yourselves, from the devastation and disruption of COVID-19 to the grief and pain of a new racial reckoning. You have had the most unusual law school experience of any class before you, and it has not been easy,” Abrams told the class.

“But what you have been through during your time at Duke has made you more thoughtful, more mature, and more empathetic. It will make you better lawyers.”

Abrams also reminded the class that, as she had told the JD graduates at their LEAD Week orientation in 2018, “the world needs lawyers.”

During the ceremony Duke Law alumni shared congratulatory messages and advice to graduates via video. They included Barbara Arnwine ’76, president and founder of the Transformative Justice Coalition, who on May 2 was presented with an honorary doctorate by President Vincent Price at Duke University’s in-person undergraduate commencement.

“Ms. Arnwine has devoted her career to helping ensure that everyone has a voice in our democracy. As Duke Law alumni, you will have the opportunity to join the many graduates of this institution who have used their power as lawyers to effect critical change in the world,” Abrams said.

“You have our very best wishes for a fulfilling career in the law. But please, come back often and maintain a strong connection with your professors, your classmates, and the next generations of Duke Law graduates. This is just the beginning of what we hope will be a long relationship with your loving alma mater.”