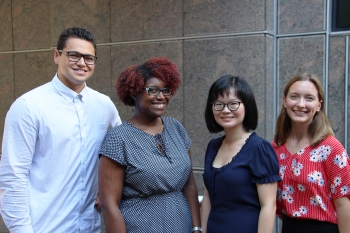 Shu Boboila is beginning her JD studies at Duke with a strong interest in patent law, having already earned a PhD in pathology and molecular medicine at Columbia University.

“I was looking for something outside of bench work,” Boboila says. “I started talking to people about becoming a patent attorney and they really enjoyed it. You get to read a lot of cutting-edge technology and use your background for scientific discovery and medical progress.”

Boboila is one of 220 students in the Class of 2022, who represent 112 undergraduate institutions and 20 countries, including Canada, China, Iran, South Korea, and Mexico. They were selected from a pool of more than 5,100 applicants. Thirty-eight percent of new 1Ls identify as students of color, and women comprise 59 percent of the class.

“Duke Law attracts some of the most talented students in the country, and students who share a passion for intellectual engagement and problem solving,” said William Hoye, associate dean for admissions and student affairs in his welcoming remarks to the incoming class on Aug. 20. “This class ranks very competitively with the entering classes at the nation’s most selective law schools, and it is certainly quite diverse based on many different measures.”

Originally from China, Boboila has spent the past decade in New York City, most recently working as a postdoctoral research scientist in radiation oncology at Columbia and a fellow in the university’s technology transfer office. She chose Duke for its strengths in intellectual property law, including the opportunity to study with Elvin R. Latty Professor of Law Arti Rai, an expert in patent law and innovation policy, as well as its proximity to the Research Triangle. But Boboila says she is open to other ways to apply her deep scientific background within the law.

“Everything in the Law School is exciting – all of it is totally new for me,” she says. So far, Professor Marin Levy’s Civil Procedure class is a favorite. “She does cold call but it’s not as scary as in movies like The Paper Chase.”

Boboila says she already feels at home in Durham. On Admitted Students Weekend she met another student from China who is now her roommate and has introduced her to new friends with similar backgrounds. And Central North Carolina’s temperate climate and open spaces is a welcome change from the Big Apple, where the window of Boboila’s tiny apartment faced a brick wall.

“I get to live in a forest – so fresh and so green – and I love it,” she says. And the cost of living suits her, too: “This is the first time I’ve had a walk-in closet.”

Jennifer McGrew hopes to use her Duke Law degree to pursue reform in public education policy. Originally from Lubbock, Texas, McGrew earned her undergraduate degree in history from Dartmouth College, then moved to Boston to pursue her master’s degree in education at Boston College and teach social studies in city schools while working toward a doctorate.

McGrew had considered Duke twice before: she was accepted to the university for both undergraduate and graduate studies. The third time was the charm. “As soon as I stepped on campus I had this feeling that this was the place I was supposed to be,” she says. “I already have a great group of friends and I feel really supported by professors and everybody on campus.”

As a future policymaker – she’s aiming for secretary of education – McGrew believes her theoretical grounding in education combined with her legal knowledge will give her the tools to right the wrongs she saw as a teacher. That combination of theory and on-the-ground experience is something few policy-makers have, she says.

“When it comes to writing policies, people create loopholes that benefit certain groups of people and disenfranchise others. I wanted to be strategic so that the policies being created are ones that will provide the supports needed for marginalized and minority students,” she says.

After graduation from Duke Law, McGrew envisions returning to Massachusetts to finish her dissertation while working at the state level to advocate for reforms that could be implemented in other states. That includes providing more support to teachers, particularly teachers of color.

“I liked being in front of my students because I could see me when I was their age, and I only had one black teacher in school and one black professor at Dartmouth,” she says. “Representation is really important.”

McGrew, who grew up the youngest of seven children, says she misses having her family close but feels that Texas’s political climate was too restrictive.

“Every time I go home my family tells me how much more radical I’ve gotten and I take it as a compliment,” she says. “But it’s good to go back where I came from and to see how much can change over such a short period of time.”

After Koloa Wolfgramm lost a leg at 13 due to a bout with bone cancer, he dove into athletics, co-founding a non-profit for amputees called Elite Hope: Amp1 Basketball Team and traveling the world as a member of the USA Para Bobsled Team. A member of The Church of Jesus Christ of Latter-day Saints, he also spent two years on religious mission before attending Brigham Young University and is proficient in his native Tongan language as well as Mandarin Chinese and Modern Standard and Levantine Arabic.

For Wolfgramm, whose wife and two small children have joined him in Durham, family and faith play central roles. “My wife is a superhero, following me around the world and supporting me,” he says. He was pleased to see congruence between his own values and those he heard during LEAD Week. “They talked a lot about engaging, serving, ethics, compassion – all things I learned at a young age in my faith that I’m now seeing from a professional side,” he says. “I’m glad to see a lot of intersection with the values that Duke espouses.”

Duke Law’s programs in Washington, D.C., also made it a strategic choice for Wolfgramm, whose goal is to work at the intersection of disability rights and international issues, an interest sparked by personal experiences. Competing around the world sparked an interest in other cultures and languages, and as a pilot for the para bobsled team he has been an advisor in the effort to get the sport accepted in the Paralympic Games.

“We had to walk the line between maintaining the integrity of the sport but making it accessible to individuals with disabilities, particularly quadriplegics, paraplegics, and amputees,” he says. “We started having policy discussions with lawyers and that’s when I first thought of law school.”

Before attending Duke Wolfgramm worked at a boutique litigation firm for civil and disability rights in San Diego. The city has a large Iraqi immigrant community, and he saw how difficult it was for those disabled from regional turmoil to access services and communicate with attorneys in their own language. “With all the issues that America has with enforcing accessibility and the ADA, immigrant communities are even more at risk,” he says.

Wolfgramm envisions working in public policy in Washington, D.C., then joining a litigation firm focusing on disability rights. As an aspiring advocate, he can already point to a big win: Para bobsled has been provisionally accepted as a medal sport in the 2022 Paralympic Games.

Madeline Hundley, who recently completed a two-year Peace Corps assignment in Rwanda, will follow her passion for human rights advocacy at Duke Law, where she is pursuing an LLM in international and comparative law along with her JD. In rural eastern Rwanda Hundley taught high school, helped train other teachers, and partnered with local residents to promote water sanitation and hygiene in the school and community.

Hundley also served on the gender equality and women’s empowerment committee for Peace Corps Rwanda, which allowed her to partner with other volunteers throughout the country and work on projects at her own site such as Let Girls Work, which exposes girls to careers outside the home and provides professional skills training.

“While Rwanda is really strong on a lot of areas of gender equality, in the rural areas the cultural notion persists that women’s primary duty is to the home,” she says. “Female students aren’t exposed to professional women and aren’t aware of those opportunities. You want to help them ask questions, see things differently and believe in themselves and their ability to pursue these careers.”

Hundley’s Peace Corps experience cemented her desire to work in human rights. She has a special interest in gender issues in the U.S. and abroad, whether that is through policy research, litigating human rights abuses, or advocating on behalf of victims or those seeking asylum.

“I had the opportunity to look at different ways the law can be used to promote these ends, so I’m trying to figure out how I can best fit in through the opportunities that arise here,” Hundley says. “There are societal barriers that you can only overcome if you treat them at the macro level and you really need to have a knowledge of the law to do that.”