In the classroom: The Presidency and Criminal Investigations 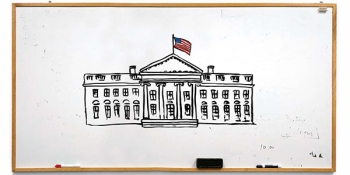 Zack Parsons ’18 came to law school wanting to be a prosecutor, so in his final semester, he jumped at the chance to take one more class from former federal prosecutors Lisa Kern Griffin and Samuel W. Buell. The focus of their new course was also timely: What happens when the subject of a criminal investigation is the president of the United States?

“If Professor Buell and Professor Griffin had offered a class on watching paint dry I probably would have taken it, because I think that they’re amazing,” said Parsons, who will join the county attorney’s office in Travis County, Texas, this fall. “But it is such an interesting issue that we’re looking at right now and it is so much in the public zeitgeist that I was clicking the refresh button at 6:59 in the morning just hoping to get a spot.”

Griffin, the Candace M. Carroll and Leonard B. Simon Professor of Law, and Buell, the Bernard M. Fishman Professor of Law, began thinking about the one-credit class after the appointment of Special Counsel Robert Mueller in early 2017. Both were beginning to field frequent inquiries from reporters and colleagues about how Mueller’s investigation into Russian meddling in the 2016 elections and allegations of collusion with the Trump campaign might unfold. What better than a seminar to help them, and their students, bone up on questions that have arisen only sporadically over the course of American history?

“We started to realize there was a series of underlying legal issues bubbling to the surface that we didn’t feel we were sufficiently deep into because they’re issues we don’t write about in our scholarship and, because they are sort of extraordinary, they’re also not issues that we dealt with in practice,” said Buell, a scholar who focuses on criminal law and the regulatory state and led the U.S. Department of Justice’s (DOJ) Enron Task Force. “And it seemed like a no-brainer that students would be excited about that.” 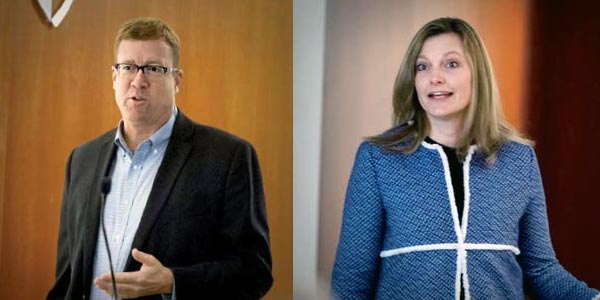 Buell and Griffin decided early on that their course, The Presidency and Criminal Investigations, wasn’t going to follow the daily twists and turns of the Mueller probe and its interaction with the White House. Instead, the seminar sought to understand the legal underpinnings and implications of a criminal inquiry involving the president, using history — Watergate and the impeachments of Presidents Bill Clinton and Andrew Johnson in particular — as the primary lens.

“We didn’t begin any particular class or reading materials for any particular class, with ‘Guess what happened in the Trump administration last week,’” said Griffin, a scholar of evidence theory, constitutional criminal procedure, and federal criminal justice policy who worked on public corruption cases as a prosecutor in the U.S. Attorney’s office in Chicago. “The actual goal was to situate it within something more concrete than the fast-moving facts of the current special counsel investigation.

“We also were committed to focusing as much as we could on law rather than facts so that it didn’t become just a hand-wringing exercise or a political discussion.”

The students, all of whom were 3Ls and many who had taken Evidence or Criminal Procedure with Griffin or Criminal Law or Corporate Crime with Buell, led the class discussions. Each session focused on a different aspect of an investigation that touches the presidency, from the roles of lawyers and grand juries to the assertion of executive privilege, the Fifth Amendment protection against self-incrimination, and the pardon power.

Jamie Gorelick, chair of the Regulatory and Government Affairs Department at WilmerHale and deputy U.S. attorney general from 1994 to 1997, visited the class to discuss the roles and responsibilities within the DOJ. Reading materials ranged from cases, statutes, and regulations, such as the one supporting the hiring of a special counsel, to selections from the U.S. Attorney’s manual and the 1998 book Impeachment: A Handbook, by Yale Law Professor Charles L. Black, Jr.

The seminar often revealed a lack of clear law or legal theory on these topics, said Kelsey Schutte ’18, who will soon join Latham & Watkins in Washington. In a required research paper for the seminar, Schutte explored the relationship between the White House and the Justice Department and the constraints that historically have limited contact between the two to protect the department’s independence. In many cases, those constraints are based on norms, not laws, she found. The prohibition on the president communicating directly with line attorneys, for example, is found only in departmental memos.

“A lot of things in this area are not necessarily codified laws, and if they are, we don’t really know what they mean because they haven’t been tested,” Schutte said. “My argument was that there should be this separation and it should be, if not codified, then written in the DOJ memos, and every single new attorney general should release a memo. When you have the president calling line attorneys, he is exerting a lot of undue pressure that makes the Department of Justice look a lot less like it’s being just and fair.” Another challenge that the class revealed: Where laws do exist, they are often limited in how they can be applied in a criminal investigation involving the president, or vague in how they might be enforced if the president has committed a crime. This has left central questions, such as whether or not a president can be indicted while in office or whether a presidential pardon can be considered obstruction of justice, so far unanswerable. Indeed, the larger question of how criminal justice is different when the presidency is concerned struck both the professors and their students as tough to answer.

“We came in through the criminal law doctrines and the evidentiary doctrines, but we kept bumping into this big constitutional law problem of ‘What is the presidency?’” said Buell. “There’s some guidance on that from the Constitution, and there’s obviously a very vast literature on presidential power. But most of those materials don’t address the kinds of questions that we’re addressing in this class.”

During the final class, third-year students Tyler Conte and Evan Glustrom led a discussion of what constitutes an impeachable offense and how Congress might weigh factors such as the severity of the misdeed, its proximity in time, and its relevance to presidential duties and authority. Glustrom then ticked off a list of hypothetical “high crimes and misdemeanors” and asked the class to raise their hands if they felt any merited removal from office, noting then-Rep. Gerald Ford’s assertion in 1970 that “an impeachable offense is whatever a majority of the House of Representatives considers it to be at a given moment in history.”

Before the class broke up, Griffin asked the students how the class had changed their views on the future of this presidency and the long-term ability to hold a president accountable.

“The students for the most part concluded that a lot of [the law] we studied either couldn’t handle the hardest questions or wasn’t going to solve the most difficult problems that we face,” she said. “The end result was — on the part of the students — a strong commitment to electoral politics and attention and energy around electoral politics, given that they were surprised by how much the extant legal remedies come up short.”

Added Parsons: “I think it’s very easy to be jaded about the efficacy of our political system and I think that that one of the things the class taught me about the current investigation is that I don’t have the luxury of being jaded. We need some idealism because I think the Founding Fathers baked a lot of idealism into their idea of how a separation of powers should occur.”