Duke’s Environmental Law and Policy Clinic, on behalf of its client, the North American Butterfly Association (NABA), submitted extensive comments to the U.S. Fish and Wildlife Service (FWS) Tuesday, in support of listing the Miami Blue butterfly as an endangered species.

The comments, written and researched by Clinical Supervising Attorney Michelle Nowlin, and clinic students Thomas Dominic ’12 and Justine Chow, a student at the Nicholas School of the Environment, outline the decline of the Miami Blue, once a common sight in coastal south Florida. It now exists only in a small segment of the Florida Keys.

“As one of the rarest insects in the country, and as a species whose decline highlights that of similarly situated butterflies in the Florida Keys, it is important to protect the Miami Blue from extinction,” state the comments.

The butterfly’s population has been diminished by loss of habitat; all vacant land in the Keys that are not already protected for conservation purposes have been projected to be developed by 2060. It also has been devastated by the introduction of non-native predator species and aggressive mosquito control.

“The state is using two different chemicals to spray for mosquitoes, both adulticides, both sprayed as fog,” Nowlin said. “You have a conflict with humans in these regions who have health concerns. People want aggressive controls. Adulticides give the most immediate relief, but it’s not necessarily the most effective reduction practice. Entomologists say larvicides, and nontoxic approaches of emptying containers with standing water, cleaning gutters, things like that, actually control mosquito populations much more effectively. However they require more day to day management and require the participation of individuals rather than relying on government agencies.

“What we’ve also documented in doing this research is that pesticides have negative impacts of corals and conchs. The pesticides cling to the plants, and when it rains, they’re washed into protected marine sanctuaries and affect all kind of species.”

The clinic students, working with NABA, engaged in in-depth scientific research and operated within a highly structured regulatory process.

"The Miami Blue project has given me an opportunity to see notice-and-comment rule-making firsthand,” Dominic said. “After learning about the legal framework in Administrative Law, and participating in the process through the Environmental Law & Policy Clinic, I have a wider perspective on how some regulations are made."

The comments also call for listing the Florida Leafwing and Bartram’s Hairstreak butterflies as endangered. Both species have been damaged by pesticide and the other dangers imperiling the Miami Blue. “While it might be too late to restore a robust population of Miami Blue butterflies, it’s not too late for other imperiled butterflies. We encourage FWS to take aggressive action, as contemplated by the law, to protect
these species and restore balance to the ecosystem.”

There is no time limit for FWS to make a decision about listing the Miami Blue as endangered, Nowlin said. In the meantime, she said, clinic students will continue to work with NABA pursuing the listing of the two other butterfly species; working to get better regulatory controls and monitoring requirements for use of pesticides on state and federal lands; engaging state and federal agencies to ensure better protections, including improving mosquito control practices to mitigate harm to protected species, especially butterflies; and monitoring research activities to better document the Miami Blue’s habitat needs. 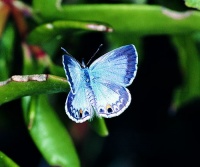