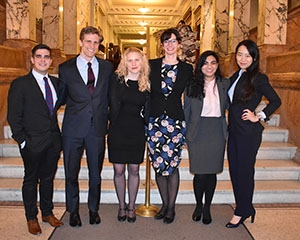 In support of the mandate of the United Nations Special Rapporteur on trafficking in persons, especially women and children, four students from the International Human Rights Clinic assembled a comprehensive trove of data and patterns of human trafficking in the United States, as well as related federal, state, local, and tribal law and policy.

Working under the supervision of Clinical Professor Jayne Huckerby, the clinic director, and Supervising Attorney Sarah Adamczyk, John Epling, Anna Guo, Suman Momin, and Christian Vazquez, all third-year students, shared their analysis in a 150-page report to the United Nations, in advance of the Special Rapporteur’s official visit to the United States from Dec. 6-16, 2016.

“The challenge in assessing the nature of trafficking and its response in the United States context is considerable because there has tended to be a disproportionate focus on sex over labor trafficking, and on foreign victims rather than domestic trafficking, in particular of LGBTI and also homeless youth,” said Huckerby, who praised her student’s dedication to the project. According to Adamczyk, “The response to human trafficking is further complicated by the overlapping roles at the federal, state, local, and tribal levels as well as the interface between various aspects of immigration, labor, family, and criminal law.”

“Labor trafficking is a huge problem in this country, and often overlooked,” said Epling, a former Marine Corps officer whose interest in the International Human Rights Clinic cemented his decision to attend Duke Law. “I was surprised to learn how vulnerable certain groups are, like undocumented immigrants, immigrants here on certain worker visas, children in the child welfare system.”

Special Rapporteur Maria Grazia Giammarinaro issued an end-of-visit statement that acknowledged the long-standing commitment of the United States to combating trafficking, as well as areas of concern in such efforts.

During her visit, Giammarinaro met with governmental authorities, civil society groups, and survivors, including at a civil society consultation in New York City on Dec. 9 that the Clinic team attended and helped to facilitate.

“In anti-trafficking efforts there are differing perspectives on what ensuring human rights for trafficked persons means, so the consultation was an opportunity for the students to further understand how the United Nations solicits information from different groups and responds to different agendas,” Huckerby said.

The students identified developing research, drafting, and information management practices as transferrable skills they derived from the project, in addition to learning substantive domestic and international law relating to human trafficking, as well as gaining insights into the interaction of federal, state, local, and tribal entities. Drawing comparisons to his summer associate experience in corporate work, Vazquez noted, “There were similarities with different parties on a transaction all wanting to do a deal but having differing ideas about how best to accomplish that, and divvying up the work was crucial.”

“We’ll be dealing with deadlines and large amounts of work whether we go into private practice or work for a government agency or an NGO,” said Momin. “It was good to have to do that, and it was very different from a doctrinal class.” Crafting their assessment and recommendations also helped hone the students’ skills in analysis and advocacy, she said. “The material shouldn’t just be intelligible and materially correct, it has to represent persuasive advocacy.”

Guo said that the process of organizing such a large project was instructional. “I learned a lot from Professors Huckerby and Adamczyk and from my teammates about how to conduct yourself professionally, from how you present yourself, to how you present a report like this.”

The students’ fall-semester project is the latest in a multi-year and ongoing collaboration between the International Human Rights Clinic and the U.N. Special Rapporteur on trafficking in persons, especially women and children.