A team from the Duke Environmental Law and Policy Clinic was among more than 65 people who attended a July 1 public hearing in Albemarle, N.C., to air concerns about pollution from a shuttered aluminum smelter.

The clinic team of Director and Clinical Professor Ryke Longest, Stanback Fellow Shannon Arata ’13, and Graham McHenry, a recent graduate of the Nicholas School of the Environment, presented research indicating the presence of contaminants such as cyanide, fluoride, lead, and PCBs in groundwater seepage and stormwater runoff near the former Alcoa-Badin Works, a smelting facility that closed in 2007. They told officials from the N.C. Department of Environment and Natural Resources (DENR), who called the hearing, that fish caught downstream from the site also showed the presence of hazardous chemicals associated with smelting.

The clinic represented the environmental advocate Yadkin Riverkeeper at the hearing, which pertained to Alcoa’s application for renewal of a permit allowing it to release wastewater and stormwater into Badin Lake and Little Mountain Creek. The clinic has represented the group in a number of related matters, including its concerns with proposed conditions of long-term re-licensing by the Federal Energy Regulatory Commission of four Alcoa-operated dams.  The clinic also filed a petition to the U.S. Environmental Protection Agency (EPA) to investigate the presence of toxic pollutants in areas adjacent to the smelter site and declare the area a Superfund site in need of remediation.  EPA has accepted the petition and is investigating the site.

Many local residents who attended the hearing asked DENR to reject Alcoa’s permit request, while two speakers favored renewal. The clinic team and Yadkin Riverkeeper Will Scott requested that should it decide to renew Alcoa’s permit, the agency put stricter water quality standards in place. A decision is due by the end of September.

The clinic prepared and filed the request for the public hearing with DENR’s Division of Water Resources after discovering that Alcoa’s permit was first slated for renewal without public input. In written comments filed in advance of the hearing, it detailed data collected over a three-year period.

Students started their research by reviewing state records relating to Alcoa’s landfill and its stormwater discharges from the former smelter site, said Longest.

“Their analysis of those records gave them reason to believe that toxins may have left the site through stormwater outfalls,” he said. The students mapped locations in the area where Alcoa has taken responsibility for monitoring and testing pollution levels without any current commitment or obligation to remove or neutralize pollutants. Alcoa has instead fenced off areas where industrial waste was dumped, as it has done with the site of the razed smelter and landfill.

“The idea here is that while those areas are toxic, they aren’t posing a threat to human health and the environment if people aren’t in contact with them,” said Longest. “I would liken that to the person who cleans up his house by putting everything in the garage and shutting the door. You haven’t cleaned anything up, but are just saying you won’t use that part of the house anymore.” 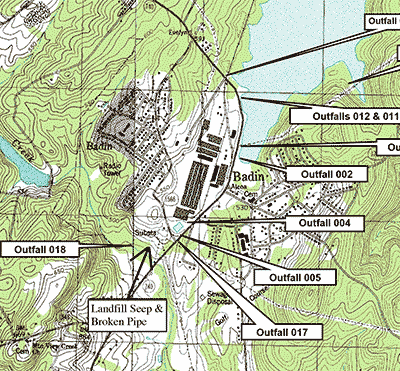 Testing of water, fish, and sediment near the outfalls marked on map of former Alcoa aluminum smelter indicate the presence of pollutants associated with aluminum smelting plants including cyanide, PCBs and metals.

Testing indicates the toxins are leaking offsite from a sloped and unlined municipal landfill adjacent to the smelter where Alcoa also dumped toxic industrial waste, as well into an area known as the Ball Field, which is slated to become a children’s playground. The clinic alleges that those sites serve as ongoing sources of groundwater contamination. In its written comments, the clinic noted that because the stormwater collection and discharge system at Alcoa-Badin Works “has become a de facto disposal system transporting contaminated groundwater into Badin Lake and Little Mountain Creek,” the permit should not be treated by DENR a stormwater discharge permit, but rather as a permit to discharge groundwater that has been remediated or cleaned.

Testing on fish caught in Little Mountain Creek in 2014 and 2015 also revealed serious contamination, said Arata, who has been working on Alcoa-related cases for Yadkin Riverkeeper since entering the clinic in 2012 as a third-year student. “What we found in the last round of testing is PCBs in fish that meet the concentration where the EPA says it’s safe to eat just one-half of a fish meal per month,” she said. “That’s as close as you’re going to get to saying, ‘Don’t eat the fish.’” That finding is particularly troubling, she added, because fish are a dietary staple for residents of economically depressed West Badin, where the former smelter is located. “The people in the area are families of color who fish for subsistence and have been disproportionately impacted by the pollution.”

“All of our testing indicates there’s probably a serious problem in this area that at the very least should be investigated further before DENR declares it safe and renews Alcoa’s permits,” Arata said. DENR, which is charged with overseeing Alcoa’s remediation of the smelter site under the federal Resource Conservation and Recovery Act, simply has not “pushed Alcoa to do much more than the bare minimum,” she said. “Alcoa is a polluter. DENR is the regulatory agency charged with making sure the polluter does what it needs to do under the law. And in this case, they’ve both failed.”

Although DENR has not yet ruled on the permit renewal, it announced on July 1 that it had reconsidered granting Alcoa a three-year grace period before the company had to reduce cyanide pollution emanating from the former smelter. That’s a positive development according to Arata and Longest, who describe the portfolio of Alcoa-related cases the clinic has in its docket as wonderful teaching tools.

“Students have learned, over several semesters, how to develop a sampling plan, how to evaluate a site for what types of contaminants need to be tested for, how to get sampling set up, and how to evaluate results and how to incorporate those into requests to administrative agencies,” Longest said.

“On the legal side, we’ve been focusing on skills related to administrative record work; administrative advocacy work; and also understanding the interplay between two different environmental laws — the laws governing the discharge of pollutants into waters, which is the Clean Water Act, and the two statutes that deal with hazardous wastes, the Superfund law, and the Resource Conservation and Recovery Act.”

Arata, who is in her second year of a post-graduate fellowship with the clinic, said the portfolio of Alcoa matters she has worked on have involved a comprehensive experience in environmental litigation and advocacy. “It’s just huge,” she said. “The case has touched on environmental justice, it’s touched on comment letters to EPA, and it’s touched on sampling. We have a stayed case in the Office of Administrative Hearings in North Carolina. We have submitted petitions before FERC. We represent the Yadkin Riverkeeper as amicus curiae in a federal court riverbed title case that’s ongoing.”

Will Scott, the Yadkin Riverkeeper, said that without the thousands of pro bono hours clinic staff and students had logged since 2009, his organization would never have been able to take on a multi-national corporation. “Duke students have provided the scientific and legal analysis necessary to hold Alcoa accountable,” he said.  “We cannot thank the clinic students and staff enough for their commitment to what they do.”