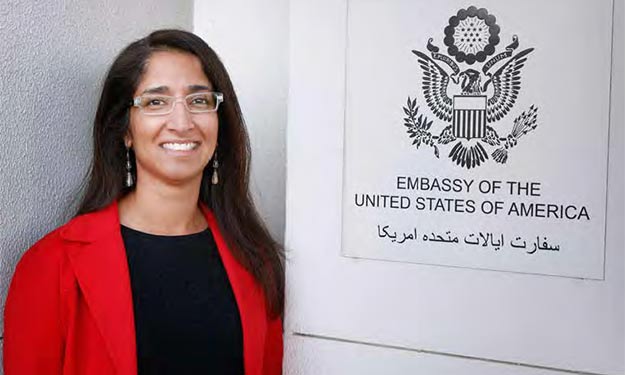 Meha Shah became legal adviser to the U.S. Embassy in Kabul, Afghanistan, in May, assuming duties in her first overseas post with the U.S. Department of State that she likens to those of a general counsel of a small city. Called on to address everything from employment and operational matters to security and military issues in the course of a day, Shah routinely relies on her well-honed ability to spot and analyze problems, to negotiate, and to utilize the subject-matter expertise of her colleagues.

“There is humbleness in knowing what you don’t know,” she says. “You need to know what you don’t know and listen to experts on the subject matter. You need to learn how to ask questions and know when you can rely on people.” That approach and insight have been key to her success over a 20-year career in foreign affairs, government service, and international law.

Shah began her career focusing on import and export regulations as an international trade attorney at Dechert Price & Rhoads in Washington, D.C., having accepted the first job offer she received. It was a good move: Advising clients on those matters prepared her well for her first State Department post within the Office of the Legal Adviser, when she worked on export controls in the Political and Military Affairs Section.

Her second post in the Legal Adviser’s Office gave Shah what she still considers a career highlight: the opportunity to draft the Kimberley Process that governs the international diamond trade. As attorney-adviser in Economic and Business Affairs, Shah participated in multifaceted negotiations to develop international protocols for certifying the legitimate mining and selling of rough diamonds, while cutting off exports from rebel factions in conflict zones that were destroying villages, devastating natural areas, abusing workers, and ignoring international trade norms.

“It was a challenge to work with so many stakeholders — the trade agencies, the development agencies, the State Department, industry, and NGOs. And because it was a nonbinding arrangement we had industry on equal footing with the governments, which presented its own challenges,” she says. “Giving civil society players that prominent of a seat — when we were used to working only with diplomats — completely changed how we had the discussion.”

After Kimberley Process negotiations concluded in 2006, Shah joined the White House National Security Council as director of international environmental issues, where she addressed climate change and cross-border trucking services, among other things. “Adapting to a leadership role where I just did not know the subject matter” was a new and exciting challenge, she says. Leaning on trade, energy, transportation, and environment experts in the federal agencies, she created a process for managing work, making decisions, and conveying them back to the agencies for implementation.

Moving back to the Office of the Legal Adviser in 2007, Shah again faced an unfamiliar and deeply technical subject area as she helped craft U.S. strategy for halting the spread of nuclear weapons and fostering peaceful nuclear energy cooperation. Over five years as attorney-adviser for the Nonproliferation Section, she worked to develop guiding principles for the International Atomic Energy Agency’s international nuclear fuel bank, developed the State Department’s position on a private-sector Supreme Court challenge to government controls on nuclear fuel imports, and advised on U.N. Security Council and IAEA resolutions on Iran.

The technical details of nuclear energy were new and daunting, but the process of learning, negotiating, and moving policy forward was familiar, Shah says.

“Coming to these issues as a lawyer and, at this point, having a fair amount of experience analyzing things I didn’t know, came in very handy. We were breaking down a problem into component parts, figuring out step-by-step how to get to a point where you can make a recommendation.”

Shah says the most difficult work of her career came during her assignment to the Africa and Near East Section, where she served as the central contact for all matters related to the ongoing conflict in Syria, including legal issues relating to foreign assistance, support to the armed opposition, terrorist designations, political transitions, U.S. and U.N. sanctions, and armed conflict. She once again found herself grateful for her colleagues’ enormous breadth of substantive expertise.

“I hadn’t dealt with human rights or with terrorism issues,” she says. “I had to gather information from so many different experts in order to provide recommendations to the clients, the policymakers. If you’re going to tell your client a statute needs to be interpreted in a certain way, you’ve got to know the precedent, you’ve got to be able to explain why the advice is what it is.”

Many of the policy choices were stark, she says. “This was maybe the first time in my entire career when I didn’t know what the right answer is. Making a decision about military intervention, for instance, has so many ramifications. I used to tell the policy clients, ‘I’m really glad I’m just your lawyer giving you options. Because I don’t know if I could make these decisions.’”

And while the media might focus public attention on the deep disagreements among policymakers, Shah says people in government service know that they can and do make a big difference. “You don’t see that in the public, but if you are in government and part of the process you see that even when you are dissatisfied with the outcome, you’ve been able to raise issues and promote options. It is a robust process.”

Shah describes her current post in Kabul as being a lot of fun, although to outsiders it may seem like a conflict zone. “Working on the compound is like being in a village,” she says. “I meet people here I would never have crossed paths with in D.C. The ability to live and work with these people has been the most unexpectedly enjoyable part of the job.”

She particularly enjoys the chance to work with her Afghan counterparts — despite difficult security conditions that can make travel challenging.

“It’s wonderful and inspiring to see what the Afghan people are doing,” she says. “There are young people and not-so-young people who have come back to rebuild the country, smart people who are working on big challenges. You feel very hopeful about their future.”

As a member of the Duke Law Alumni Association, Shah often counsels students considering careers in international law and government service. She attributes her own career success more to good luck and solid instincts than methodical planning. “Perhaps if I were starting a career now, I’d be more calculated and targeted,” she says. “But I think maybe it works out better when you don’t know any better and you go with your instincts. My advice to people now is to work with people you like.” 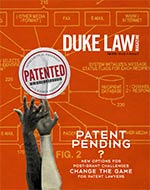