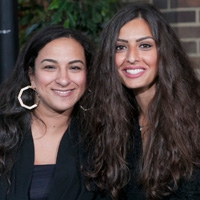 Leading the way for Saudi Arabian women in law

Noor Alfawzan, right, presented the LLM Award for Leadership and Community Service to classmate Ryham Ragab, left, at the 2012 Graduation Gala in May.

Just three years ago, it would not have been possible for Noor Alfawzan to graduate from Duke Law School with her LLM. That’s because Alfawzan was part of the very first class of women to obtain law degrees in her home country of Saudi Arabia.

“I was one of seven when I graduated,” says Alfawzan, who graduated first in her class from Prince Sultan University College for Women in Riyadh in 2010. “Now there are more than 100.”

Alfawzan says many law firms in Saudi Arabia are eager to hire women.

“It’s a huge shift,” she says. “When I first went to law school people said, ‘Are you seri­ous, you really think you’re going to be a lawyer in Saudi?’ But people have witnessed it happening, and it’s generally accepted.”

Alfawzan’s desire to become a lawyer began at a young age.

“My father was a lawyer, so I could have been influenced by him. It could be in my genes, I don’t know,” she says. “It’s just something I always wanted.”

Alfawzan initially began her university studies in information systems, because law wasn’t an option. She immediately switched degree programs when the option became available and hasn’t looked back.

“I was extremely lucky and it was the best decision I’ve ever made,” she says.

Alfawzan says she and her law classmates in Riyadh became very close and met fre­quently outside of class to study.

“During finals we gathered every day at someone’s house and we all studied togeth­er,” Alfawzan says.

Because it was a condensed program – students were required to take around 18 credits per semester — not all students com­pleted the program at the same time. She says all the women have since graduated and many are now working in law firms or gov­ernmental bodies.

Since receiving her degree in 2010, Alfawzan has worked at Latham & Watkins in both Dubai and Riyadh specializing in corporate law and finance, which was also the focus of her studies at Duke Law.

Alfawzan says she chose Duke Law for its reputation overseas.

“A lot of the suc­cessful people in my country are Duke graduates,” she says. “The head of the Saudi Arabian Monetary Agency [Mohammed Al-Sheaibi] is an SJD alumnus and he’s a great example.” Al-Sheaibi received both his LLM and SJD from Duke Law in 1990 and 1993, respectively. He is now director of the local department at the Saudi Arabian Monetary Agency.

While at Duke Law, Alfawzan participated in several pro bono groups, including the Street Law program, through which she visited a local middle school to teach stu­dents how to perform in a mock trial.

“It was fantastic,” Alfawzan says. “I love children. When I saw them on the day they were performing, I was so happy, so proud.”

She also did Arabic translations for the Iraqi Refugee Assistance Project, taught Arabic to children at a local Islamic center, and was the LLM representative of the Duke Student Organization for Legal Issues in the Middle East and North Africa.

Alfawzan is staying in Durham for the summer and sitting for the New York State Bar Exam in July.

“Eventually I want to go back to Saudi and work in private practice to add value to my country,” she says.

She will take with her classroom knowl­edge, and all she learned from her peers.

“I learned so much on a personal level,” she says. “What’s good about the LLM program is that we were a group of 96 students from many different countries, so you learn at least one thing from each person you meet.”

Alfawzan says some of the friendships she formed were unexpected.

“It’s amazing. I never thought that at this age I’d still be forming new friendships that will last forever,” Alfawzan says. “I’m friends with people I never imagined I’d be friends with and I’ve met people from countries so far away from home — Japan, Chile, Peru. It just widens your horizon, so you go back with a different perspective.”