Judge Allyson K. Duncan ’75 of the United States Court of Appeals for the Fourth Circuit advised Duke Law’s 2019 graduates to keep themselves open to “inspiring challenges and discoveries” in the course of their careers when she spoke at their convocation ceremony on May 11.

“I want to implore you to never underestimate the value of serendipity, and the fulfillment that awaits along the road less traveled,” said Duncan. “I commend to you the assessment of the entrepreneur Alice Foote MacDougall that ‘much of the success’ — and, I would add, the joy — ‘of life depends on keeping one’s mind open to opportunity and seizing it when it comes.’”

The convocation ceremony in Cameron Indoor Stadium honored 218 JD graduates, 16 of whom also earned an LLM in international and comparative law, and six who also received an LLM in law and entrepreneurship. Two graduates earned the Law School’s LLM in law and entrepreneurship for graduate attorneys. Nineteen JD graduates received the Public Interest and Public Service Law certificate. And nine earned graduate degrees from other departments and schools at Duke University in addition to their JDs. 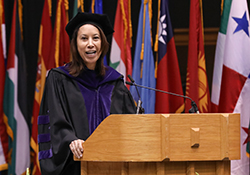 Duncan, who had first addressed the JD graduates during their LEAD Week orientation, told the graduates she “literally grew up” in Durham’s historically black North Carolina Central University (NCCU) Law School, where her mother taught for more than 20 years. It was a time “when those students would not have been welcome here,” she said, referring to Duke Law where, years later, she felt both welcomed and nurtured.

Still, as one of the first five African American women to graduate from Duke Law, “the traditional law firm route was not a realistic one for me, so I embarked on a decidedly idiosyncratic career path,” Duncan said. She ticked off her varied professional positions: editor at a legal publishing company, appellate law clerk, federal appellate attorney and then legal counsel for the U.S. Equal Employment Opportunity Commission, law professor at NCCU, state appeals court judge and commissioner on the North Carolina Utilities Commission — both unexpected appointments by the state governor, partner in a large law firm, and federal appellate judge. (In fact, Duncan was the first African American woman to serve as a justice on the N.C. Court of Appeals and on the Fourth Circuit.)

There was no “discernible game plan” dictating her career moves, she said. “I can pretend to no method to this madness,” she said. “Rather, I took advantage of these opportunities for no more compelling a reason than a) that they sounded interesting and b) could conceivably contribute to some greater good.”

Each post afforded useful training for the next and brought her enormous personal satisfaction, Duncan said. Becoming a utilities commissioner, for example, just as competition was about to disrupt the “stodgy” telecommunications, natural gas, and electricity industries provided critical experience that facilitated her success in private practice. But that “lucrative” period was cut short by her unexpected nomination to the Fourth Circuit by President George W. Bush. “Serving on the Fourth Circuit, with as thoughtful and collegial a group of people as one can imagine, has left me with powerful memories and lifelong friends,” she said. “It has also been the site of my most meaningful serendipitous intervention.”

That came by way of her appointment, by Chief Justice John Roberts, Jr., to the International Judicial Relations Committee of the United States Judicial Conference. After successive direct applications had been turned down, because “every federal judge in the country” sought the same post, she seized an unexpected opportunity to appeal directly to the chief justice when she hosted a dinner for him at her home when he was in Durham to judge an NCCU moot court competition. He not only granted her request to join the International Committee, but subsequently made her its chair.

“The experience of traveling around the world, interacting with judges and prosecutors facing unimaginable challenges in situations more daunting than any we will know, has been life altering,” said Duncan. “It has given me the highest regard, not only for my American colleagues who have worked throughout the world — in countries like the Sudan, Afghanistan, Iraq, and Yemen — but also for the judges in those countries, some of whom are now imprisoned, who are still struggling against all odds to uphold the rule of law. There is no greater source of perspective — and humility — than being exposed to the views, cultures, and languages of other people.

“What I have learned throughout my career is the value of keeping your eyes open for the exact moment when serendipity might appear — often in a guise you least expect,” she said.

Duncan also cautioned the graduates to maintain balance in their lives, noting that lawyers tend to be both driven and prone to perfectionism. “Please practice preventive medicine,” she said. “Find some right-brained activity and persevere at it, even if you are bad. Particularly if you are bad.” A male law clerk, she said, admitted to being “humbled … by two sticks and a piece of string” during a knitting class she taught at the Fourth Circuit. “That was precisely the point,” she said. “I encourage all my clerks to take up a hobby that challenges the inner perfectionist in them, and I urge you to do the same.”

Only by “working hard at everything you do while remaining open to the development of new opportunities” can one be in a position to benefit from serendipity, said Duncan, a member of the Law School’s Board of Visitors and a Duke University trustee. She reminded that one such opportunity involves “paying it forward.”

“As a Law School graduate, you are in a position of privilege,” she said. “You have learned how to navigate the system to set yourself up for success. You now have an obligation to use that knowledge to give back to your school and to others—whether through mentorship, financial support, or involvement with organizations that work to help others achieve the same success.”

“Be present” and make a difference in the lives of others

LLM class speaker Ross Hollingworth, a South African attorney, commended his classmates both for their professional and scholarly accomplishments and for their academic success. He called himself “humbled” by their discipline and compassion: “Despite being divided by six continents, 40 countries, and 24 languages, you have shown a shared commitment for mutual understanding and respect for everyone around you.” All have proven that they know what it means to take risks, to work hard, and “and what it means to pour everything you have into the pursuit of success,” added Hollingworth, an aviation lawyer. “All I ask of you is this: Know your worth. Don’t doubt yourselves. Be bold. Be brave. And don’t leave your future in someone else’s hands.”

Hollingworth, who began his remarks by quoting former South African President Nelson Mandela framing education as the most powerful weapon for world change, closed with another of the statesman’s observations: “‘What counts in life is not the mere fact that we have lived. It is what difference we have made to the lives of others that will determine the significance of the life we lead.’”

JD class speaker Bryant Wright, a classically trained violist, referenced several musicians, including Beyoncé, Mozart, and Duke Ellington, as he shared four maxims he uses to remind himself to be present. “First, every wall is a door,” he said. “Many obstacles impede our paths. But these walls are merely doors to be opened if we imagine a better world on the other side. … At the end of three of the quickest yet longest years of our lives, we all successfully re-imagined the wall we encountered in August 2016 into the door we opened today.”

Wright’s second maxim involves self-care. “The first wealth is health,” he said. “Your health is worth looking after.” His third: “Choose love.” Citing Cornel West for the proposition that “‘justice’ is simply what love looks like in public,” Wright urged his classmates to look beyond people who are valuable to their careers and instead acknowledge the many people they interact with daily who also deserve attention and respect. He gave “massive shout-outs,” by name, to members of the Law School’s custodial and café staffs, as well as several faculty assistants and administrators who connected students with resources. “Choosing love means recognizing all of the people around you for their contributions to your success,” he said.

Wright’s final maxim reminded his classmates that they only live once. “Take risks,” he said. “Enjoy yourself. … Embrace new experiences often even when they challenge you in fundamental ways, like that time in our first year when we all had to re-learn how to read.

“So, Class of 2019, I submit we’ve finally made it to the beginning of careers filled with growth and learning, peace and trouble, tears and laughter. … Life runs directly at you. Be present in each moment and let love be your managing framework.”

Presiding over her first convocation ceremony, Kerry Abrams, the James B. Duke and Benjamin N. Duke Dean and Professor of Law, commended “remarkable” classes of graduates. The international LLM graduates — many of whom have established careers as lawyers, judges, government officials, and teachers in their home countries, shared their knowledge of their own systems of law as well as their cultures and traditions as they learned about the American legal system. “Their great enthusiasm for their courses, for one another, and for Duke is inspirational,” she said.

The JD graduates excelled in class, published works of scholarship, organized conferences, represented clients, served the community, participated in national and international competitions, briefed and argued cases in the courts, and engaged in field research here and abroad. “You took the most challenging courses from some of the greatest law teachers in the world, and you won their respect and admiration for your efforts, both inside and outside of the classroom,” she said. “In short, you have earned the right to join our distinguished body of alumni who practice law and serve the common good all over the world.”

Congratulating all the graduates on their accomplishments and wishing them the best for fulfilling careers in law, Abrams urged them to find ways to lead and to serve in their communities and to stay close to Duke Law: “Come back often and enrich your own lives in the law by maintaining a strong connection to your loving alma mater, your professors, your classmates, and the next generations of Duke Law graduates.”

The convocation ceremony was preceded by several celebratory events, including the Graduation Gala on May 9, when the graduates honored seven of their peers with Justin Miller Awards in the areas of excellence in leadership, integrity, intellectual curiosity, citizenship, and engagement with the student body and the LLM Candlelight Dinner.

At a ceremony on May 10, members of the Duke Law faculty and administrators honored the following graduates with Faculty Awards for excellence in specific subject areas as well as in pro bono and public service and service to the Law School community:

At an earlier ceremony, clinical faculty honored students in the Duke Legal Clinics for excellence in the areas of advocacy, professional service, leadership, writing, and public speaking.