The October 2019 term of the U.S. Supreme Court is underway, with the justices set to rule on significant cases relating to immigration, employment discrimination, criminal justice reform, state sovereign immunity, the scope of Second Amendment rights, and environmental protection, among others. 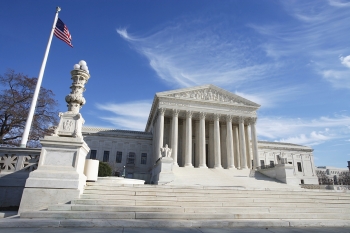 Duke Law scholars are following and weighing in as amici on many cases on the docket, as well as closely watching the impact of a robust conservative majority on the Court’s jurisprudence.

Gauging the influence of Court’s conservatives

During a Supreme Court preview event at Duke Law on Sept. 19, Professor Stephen Sachs said he believes the Court will split on behalf of the employers.

“I think the odds are in the government’s favor,” Sachs said. “Although I don’t know that Justice [Brett] Kavanaugh has taken a position on this, my guess from the general read of the Court majority is that the employers are probably going to prevail.”

Sachs predicted the Court will rule similarly on another high-profile trio of cases that have been consolidated and will review the Trump administration’s rescission of the Deferred Action for Childhood Arrivals (DACA) policy enacted during the Obama administration and the lawfulness of its decision to end it.

“The first question is, is the rescission of DACA an area committed to enforcement discretion by law and therefore not something the courts would review?,” Sachs said. “The second question is, if it is subject to APA review, is it arbitrary, capricious or otherwise contrary to law?

“The government doesn’t have to win that DACA is unlawful. It just has to establish that it’s plausible enough to think it might be and that’s good enough reason to stop doing it. This court has been pretty solicitous of government discretion in certain areas, so my guess is that they will probably uphold the administrative department’s exercise of discretion here.”

Questions of criminal procedure make up the largest category of cases under review, observed Professor Lisa Kern Griffin during the September panel discussion. These include whether it is constitutional for a state to abolish its insanity defense; whether states must require a unanimous jury verdict in felony criminal cases; and whether it is reasonable for a law enforcement officer to assume that a driver of a vehicle is its registered owner during routine traffic stops.

The last question is at the heart of Kansas v. Glover, scheduled for Nov. 4. The case is significant because of the sheer number of face-to-face contacts citizens have with law enforcement as a result of a traffic stop – more than 25 million per year, according to Griffin, the Candace M. Carroll and Leonard B. Simon Professor of Law.

Traffic stops serve as a “point of entry” into the criminal justice system, she said, and citizens are rightly concerned with the impact of conscious or unconscious racial and ethnic bias in who is stopped and the potential for escalation into violence.

“Law enforcement officers do not wake up dedicated to the idea that they are going to violate people’s constitutional rights,” Griffin said. “They do not ex ante resolve to commit acts of violence or racial violence. But those things happen in the spaces where law enforcement has low-level, on-the-street everyday interactions with citizens, so we need to be careful about where those points of entry open up and what they are.

In recent Supreme Court terms, Griffin said, some broader themes have recurred regarding the administration of criminal justice, including greater permissiveness in allowing law enforcement to make assumptions and even mistakes in stopping citizens.

“There is a general trend of forgiving law enforcement their mistakes and rewarding their assumptions, trusting law enforcement in these situations,” she said. “They are expanding justifications for stopping people and that's why I think that this is an important case.”

The Court also has become increasingly willing to address the role of race in criminal justice, especially regarding jury composition and deliberation, she said. In last term’s case Flowers v. Mississippi, the Court struck down the conviction of an African-American man who had been prosecuted for murder six times by a district attorney who consistently and repeatedly rejected people of color as jurors.

Writing for the 7-2 majority, with Justices Neil Gorsuch and Clarence Thomas dissenting, Justice Kavanaugh wrote, “Over the course of the first four trials, there were 36 black prospective jurors against whom the State could have exercised a peremptory strike. The State tried to strike all 36. ... We cannot ignore that history.”

Said Griffin: “In one of his first opinions, Justice Kavanaugh wrote about numbers. And he said that the numbers speak loudly. ... There really isn’t much express discussion of race in any criminal procedure cases. Juries are an exception to that. So there’s some hopeful language.”

Court watchers at the Duke Center for Firearms Law are paying close attention to Second Amendment cases under consideration by the justices. Only one is currently on the docket— New York State Rifle & Pistol Association, Inc. v. City of New York, New York — but there are 14 petitions awaiting action that  raise a variety of issues including the limits of a state’s regulatory authority over licensing and permitting schemes and regulations over certain types of weapons and could have even greater impact on gun owners’ rights and the boundaries of permissible firearms regulation, said Jake Charles, the center's executive director.

“Whereas the New York case deals with an idiosyncratic law that no other state has, the New Jersey challenge concerns a type of law that is similar to laws in at least a half dozen states,” Charles said. “These petitions raise a variety of Second Amendment and firearms-related issues, including important questions of statutory interpretation and the scope of agency discretion.”

Professors Ernest Young and Neil Siegel, both leading scholars of constitutional law and federal jurisdiction, co-authored the “Brief of Public Law Scholars as amici curiae in support of petitioners” in Frederick L. Allen and Nautilus Productions, LLC, v. Roy A. Cooper, III, as Governor of North Carolina, et al, which will be argued before the Court on Nov. 5. Young, the Alston & Bird Professor of Law, and Siegel, the David W. Ichel Professor of Law and Professor of Political Science, co-authored the brief with Samuel Bagenstos, the Frank G. Millard Professor of Law at the University of Michigan.

Allen v. Cooper has the potential to be the most important state sovereign immunity case in many years, according to Young. The issue before the Court concerns the constitutionality of the Copyright Remedy Clarification Act (CRCA), under which states that infringe federal copyrights can be held liable for monetary damages. Allen is a videographer specializing in underwater photography who filmed the recovery of a shipwreck believed to be the pirate Blackbeard’s flagship, the Queen Anne’s Revenge. He sued the state of North Carolina for unauthorized use of his images, but had a successful district court ruling reversed by the Fourth Circuit. The appellate court held that the CRCA could not abrogate the state’s sovereign immunity under the Eleventh Amendment and, as a result, that states can’t be sued for copyright infringement.

The scholars’ purpose in filing their brief, they write, is to suggest a path for resolving the case in a way that is “faithful to the Constitution’s text and history” and “minimizes disruption” to the Court’s state sovereign immunity jurisprudence. That jurisprudence stems from the Court’s 1996 ruling in Seminole Tribe of Florida v. Florida. In the scholars' view, Seminole wrongly held that Article I of the U.S. Constitution did not give Congress the power to abrogate the states’ sovereign immunity; in particular, Seminole reached beyond the text of the Eleventh Amendment and strayed from the founding generation’s treatment of common law doctrines and view of state sovereignty. But the scholars argue that Allen “can be a vehicle for refining Seminole’s impact without repudiating its central holding.” (Read more.)

Professor of the Practice Steve Roady ’76, Clinical Professor Michelle Nowlin JD/MA ’92, and former Lecturing Fellow Shannon Arata ’13, co-authored the law professors’ brief in support of the respondents in County of Maui v. Hawaii Wildlife Fund, et al, which was filed on July 19. They filed the brief on behalf 37 scholars of environmental and natural resources law in the important Clean Water Act case.

The central issue in the case is whether the County of Maui, Hawaii, is required to obtain a permit for wastewater injection wells that release millions of gallons of treated sewage daily to the ocean through groundwater. The record in the case shows that this wastewater affects water quality and results in ecological damage, including to a nearby coral reef.

The brief argues that the plain language, context, and legislative history of the Clean Water Act establish this method of disposal as a discharge into navigable waters, which requires a permit.  It emphasizes that the statute prohibits both direct and indirect discharges of pollutants to this country’s waters. (Read more.)