From courtroom to classroom 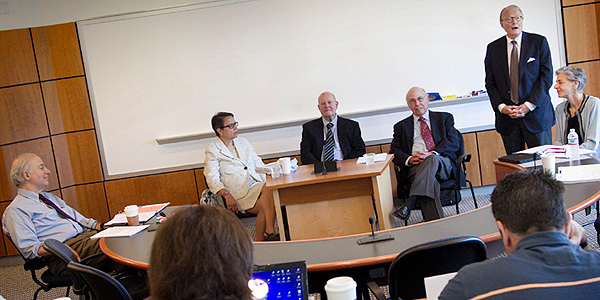 Members of the inaugural class of the new Master of Laws in Judicial Studies program took courses on such subjects as analytical methods, international law in U.S. courts, federalism, forensic finance, and the study of the judiciary, many of which were taught by members of the Duke Law faculty. U.S. Supreme Court Justice Samuel Alito taught a seminar entitled Constitutional Courts, and visiting jurists and scholars taught the weekly Judges’ Seminar.

“We created this center because we saw there was a growing divide between the academy and the practicing bar and bench,” said John Rabiej, director of the Center for Judicial Studies. “This program is one way in which we’ll bring the academy and the bench together to help bridge this divide.”

The curriculum is distinctive in focusing on the judiciary as an institution, added Jack Knight, the Frederic Cleaveland Professor of Law and Political Science, who serves as co-academic director of the Center for Judicial Studies with Professor Mitu Gulati. “There are some traditional law school courses, focusing on jurisprudence and recent issues in law, and there are some social science courses, focusing on the administration of courts and how the courts are organized,” he said. “It is an interesting blend of approaches, and we are think­ing it will facilitate productive discussions and perhaps new ideas for further scholarly study.”

The intensive four-week session, which began on May 20, rep­resented the first of two sessions in the LLM program for judges, the only one of its kind offered by a law school in the United States. The degree program requires 22 course credits earned in-residence at Duke over two successive summer terms, as well as writing a thesis.

By all accounts, the students — who also had to keep up with their chambers and dockets during their time at Duke — got what they came for.

“It’s a major commitment,” Judge Andre Davis of the U.S. Court of Appeals for the Fourth Circuit told a visiting reporter from the Durham Herald Sun. “It’s hard, hard for all of us, hard to arrange your schedule, and hard to take four weeks away. But it’s very meaningful to have this opportunity. And the benefits far outweigh the sacrifices.”

“I wanted to enhance my skill set, to be a good judge, the best judge I can be,” Magistrate Judge George C. Hanks Jr. of the U.S. District Court for the Southern District of Texas told the same reporter. “I wanted to be in an atmosphere where I would have the time to think about the law. To do your job better, you have to understand how you do your job. And that’s what I’ve gotten here.”

They also had a chance to bond in class, over dinners, and at a Durham Bulls baseball game, and to learn from one another.

“We have judges here from all levels,” said Texas Supreme Court Justice Eva Guzman. “We’re learning how we have handled similar situations. We’re getting a broader view, and we’re able to explore issues that can only enhance the work we do.”