A veteran criminal defense attorney, Maher has led the Center for Death Penalty Litigation and the N.C. Office of Indigent Defense Services. 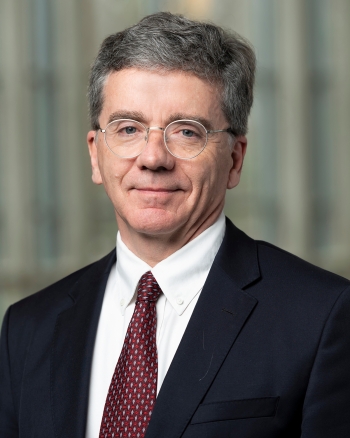 Thomas Maher, who has taught criminal trial practice to Duke Law students for nearly 30 years, has joined the Duke Center for Science and Justice as executive director.

Maher practiced criminal defense law in state and federal court for more than 20 years before becoming, in 2006, executive director of the Durham-based Center for Death Penalty Litigation, where he represented capital defendants in trial, appellate, and post-conviction proceedings. In 2009 he became executive director of the North Carolina Office of Indigent Defense Services (IDS), where he advocated for more funding for public defense statewide and pushed forward initiatives to improve the quality of representation.

In February, North Carolina Supreme Court Chief Justice Cheri Beasley MJS ’18 presented Maher with the court’s highest honor, the Friend of the Court award, for his dedication to the Judicial Branch and his 11 years of service at IDS.

“I, along with countless indigent clients, owe Tom a debt of gratitude for his vision and leadership of the Office of Indigent Services,” Beasley said. “We are sorry to lose his depth of knowledge and experience but wish him the very best in his role at Duke University.”

With faculty director Brandon Garrett, the L. Neil Williams, Jr. Professor of Law, and collaborators across the university, Maher will help translate the work of the Duke Center for Science and Justice, which launched last year, into policy solutions based on empirical evidence for problems and inequities throughout the criminal justice system in North Carolina and beyond.

Said Garrett: “We could not be more honored and excited to have Tom join us as our executive director.  Tom has a deep knowledge of criminal practice, tremendous leadership experience, and a life-long commitment to public service.

“Tom has, in a short time, brought his insight and energies to all of our center projects. He is such a pleasure to work with. We on the faculty are thrilled to collaborate with him — and our Duke Law students, who have been inspired by him for years now, are fortunate to have new opportunities to learn from Tom.”

Since its launch, the center has been working on myriad issues including driver license suspensions, cash bail, pre-trial detention, and diversion policies, sentencing practices, eyewitness identification errors, false confessions, blood pattern analysis and other forensic methods, and the efficacy of risk assessment tools, among others. Affiliates, including leading researchers from Duke’s School of Medicine, also are working with research teams at the Law School on a series of projects at the intersection of law and medicine, behavioral health, and criminal justice.

“I’m a big believer that well-done research can give you knowledge of how to fix things, or even identify areas in need of fixing. But to get policymakers to make changes also requires compelling stories – and compelling communication strategies to make sure the work gets out there,” Maher said.

“If you can work with local actors and help them think through how they can implement good policy, you don’t need the law to be changed. What you need is local culture to be changed. Understanding and connecting with people doing the work at the local levels is really important in criminal justice.”

Maher’s extensive career in criminal defense includes serving as co-counsel in the high-profile 2003 murder trial, depicted in The Staircase docuseries, of Durham author Michael Peterson, who was convicted and later released after evidence emerged of misconduct by a State Bureau of Investigation agent. He has worked on numerous capital cases including that of Leon Brown, an intellectually disabled man who in 1984 was sentenced to death, as a 15-year-old, after giving a false confession to rape and murder and exonerated by DNA evidence 30 years later. Maher also defended Sandra Odom, who was told that confessing to drowning her stepson would allow her to regain custody of other children; after two trials resulted in a hung jury, prosecutors declined to try her a third time and she was released.

“The majority of people are not wrongfully convicted but it happens in enough cases that it is concerning,” Maher said. “And of course we only notice it in the bigger, more serious cases. You can imagine the number of lower level cases where people are being convicted and nobody goes back to re-examine them.”

Maher said he loved trying cases and never planned to leave the courtroom to lead a state agency. But his position at IDS allowed him to improve the quality of public defense and help direct the resources of a consistently underfunded, understaffed system.

“It was a really rewarding position,” he said. “We were able to do things like create a forensic resource counsel to help lawyers better understand and deal with forensic issues, because most of them don’t have that background or experience. The idea was, where are the weaknesses and what can we do with our limited resources to make public defense better?”

Maher said the Duke Center for Science and Justice promises to allow him to help facilitate even greater change: “I thought it would be exciting to have an opportunity to focus more on substantive policy reform and make a difference at an even higher level.

“I am working with researchers and people who aren’t in the courts on a daily basis but are thinking and researching and have the ability and the resources to step back and say, ‘Why do we see juvenile sentence life without parole? Why do I see people without drivers licenses? What are actually driving these decisions and what are the impacts?’”

Maher joined the center March 1, just as Garrett was appointed independent monitor of a landmark bail reform settlement in Harris County, Texas, the nation’s third most populous county. He will direct a seven-year project that includes ongoing analysis of Harris County data by research teams at the Duke Center for Science and Justice and the Public Policy Research Institute at Texas A&M University, and intensive engagement with stakeholders in Texas, collaborating with deputy monitor Sandra Guerra Thompson, professor of law and director of the Criminal Justice Institute at the University of Houston Law Center. Maher is now delving into the project.

“As a result of litigation, Harris County has had to be thoughtful about what the components of bail reform should be and how we can re-examine the system and increase the likelihood of success as opposed to punishing failure,” Maher said.

“Hopefully we can take the lessons learned there to North Carolina and other places and say, ‘You can do the same here and have a system that is both more efficient and no less costly, but also fair.’”

Maher’s appointment was praised by colleagues who know his work from the Law School, in the courtroom, and in the community.

“Tom and I have been colleagues for decades, first as law partners and then as fellow teachers of trial practice at Duke,” said Professor Donald Beskind LLM ’77.

For his part, Maher said that having closer interactions with students is one of the things he most looks forward to in his new post. Having started just two weeks before classes went online due to the spring’s extraordinary circumstances, he is meeting with students interested in public defense via Zoom but prefers more direct connections.

“I’m looking forward to when the life of the Law School returns to being centered here and not on computer screens,” he said.