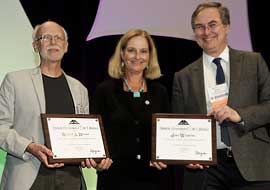 Professor Richard A. Danner has been honored by the American Association of Law Libraries (AALL) for his latest book, The IALL International Handbook of Legal Information Management. He shares the 2012 Joseph L. Andrews Bibliographical Award with his co-editor Jules Winterton, the librarian and associate director of the Institute of Advanced Legal Studies at the University of London.

The IALL International Handbook offers both descriptions of the legal environments in which law librarians work worldwide and analysis of the current and emerging policy issues they face in legal information management. While some of the chapters are country- or area-specific, most deal with transnational issues faced by law librarians and other legal information specialists throughout the world and suggest that solutions to common problems can be found through collaborative efforts.

The AALL Awards Committee acknowledged the work of all 21 contributing authors with the Andrews Award, which honors a work’s “creative and evaluative elements and the extent to which judgment was a factor in its formulation,” according to an announcement in the June 2012 AALL Spectrum.

“The handbook is unique in content and no other work has been published that provides such a wide array of information on so many aspects of foreign and international law librarianship … (It) promises to be a standard work for librarians specializing in foreign, comparative, or international law,” the announcement stated.

“My co-editor Jules Winterton and I are gratified that the American Association of Law Libraries has acknowledged our work with the Andrews award," Danner said. "It is a tribute to the quality of the contributions written by authors from around the world on topics of legal information management. We were fortunate that leading authorities on the subjects we hoped to cover were enthusiastic about participating in the project.”

Danner is Duke’s second recipient of the Andrews Award. Senior lecturing fellow and Reference Librarian Marguerite Most received it in 2007 for Prestatehood Legal Material: A Fifty-State Research Guide. She shared the award with co-editor Michael Chiorazzi, professor of law and law library director at the University of Arizona – and a former reference librarian at Duke Law.