Danner, leader in evolution of law library and librarianship, to retire July 1 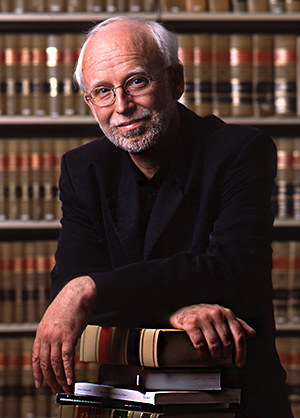 Archibald C. and Frances Fulk Rufty Research Professor of Law Richard A. Danner, considered one of the preeminent law librarians in the country and a giant in the field of law librarianship, will retire July 1 after more than 35 years at Duke Law School.

Danner, who is also the senior associate dean for information services and director of the J. Michael Goodson Law Library, joined Duke Law School in 1979. He was honored this year with the Marian G. Gallagher Distinguished Service Award from the American Association of Law Libraries and the Duke Law Alumni Association A. Kenneth Pye Award for Excellence in Education.

"As our Rufty Professor and library director, Dick has been a transformative figure in the field of law librarianship, helping the entire field transition into the digital age,” said Dean David F. Levi. “He has done the same for us at Duke, taking us from the concept of the library as an archive and study hall to the library as a collaborative research center. The future of the Goodson Library at Duke Law looks very good thanks to Dick's dedication and creative vision."

Danner has been at the forefront of understanding information technology and electronic publishing and their impacts on legal education, research, and scholarship. Under his leadership, Duke became the nation’s first law school to offer free open access to the text of its student-edited journals online, in 1998. Danner also led the creation, in 2005, of the Duke Law Scholarship Repository, a full-text archive of open-access publications by faculty and affiliates, which has since generated nearly 12 million downloads.

“He moved the library from the book era to the electronic era,” said Brainerd Currie Professor of Law James D. Cox. “His national visibility on this issue speaks to how lucky we are to have Dick here.”

In 2009, Danner encouraged directors at 12 of the country’s top university law libraries to call for law schools to stop publishing law journals in print entirely while making electronic versions available for free online. The proposal, which was titled “The Durham Statement on Open Access to Legal Scholarship” because it was initially crafted at a meeting during the November 2008 dedication of the Goodson Law Library and Star Commons at Duke, argued that electronic publication was not only more economical at a time of financial uncertainty for law schools but also allowed scholars to greatly expand the reach of their work into other countries and disciplines. Duke Law has since ended print publication of all but two of its journals.

“Dick is the original modest hero,” said James Boyle, William Neal Reynolds Professor of Law and a scholar of copyright and intellectual property law. “There is no person in the library community who has done more to preserve and extend the ideal of openness: that everyone should have access to knowledge and scholarship. Dick made sure that Duke's journals were all available for free on the open web, from the moment that the web existed. He wasn't just ahead of the curve. He drew the curve. I am proud to have had him as a colleague.”

Danner has overseen major changes to the Law School’s physical plant, too, through a series of expansions and renovations that modernized learning and research spaces. He led the 2008 renovation of the library, which expanded the main floor and mezzanine communal spaces with large tables for individual and collaborative study, a two-story window wall, and easy access to library, media, and computing services.

“The space just works, and it’s really a monument to his understanding of the role of the law library in the Law School community,” said Professor Thomas B. Metzloff, who has worked closely with Danner on a variety of renovations throughout the building beginning in the late 1990s, including a complete refurbishing of all of the Law School’s classrooms and learning spaces between 2010 and 2016 that introduced cutting-edge instructional and presentation technology. “I think the space he created in the library is going to be a great legacy to his vision. I’m just profoundly impressed every time I think about the space and what he did. And he did that for the whole Law School.”

Danner has also taken leadership roles in professional organizations related to law libraries and legal education. He served as president of AALL in 1989-90, chaired several AALL special committees and task forces, and edited AALL's Law Library Journal from 1984-94. AALL presented him with its Distinguished Lectureship Award in 2014. Danner also served as first vice-president of the International Association of Law Libraries from 2004-2010. He has been active in the Association of American Law Schools, serving on the Executive Committee from 2002-04, and the American Bar Association Section on Legal Education and Admissions to the Bar, serving on numerous law school site visit committees.

“He is the single greatest leader in law librarianship in the last 50 years,” said Michael Chiorazzi, associate dean for information services at the University of Arizona James E. Rogers College of Law and a reference librarian at Duke Law from 1981 to 1989. “When you go to law library meetings … Dick was the smartest guy in the room.”

At Duke, Danner has taught Legislation as well as courses on legal research and writing. He has also taught Introduction to American Law at Duke’s summer institutes in Geneva and Hong Kong.

He is the author of two books, Strategic Planning: A Law Library Management Tool for the '90s and Beyond (2d ed. 1997) and Legal Research in Wisconsin (1980), and the co-editor of three others, including the IALL International Handbook of Legal Information Management (2011) (with Winterton), which received the 2012 Joseph L. Andrews Legal Literature Award. He has also published countless articles, papers, and book chapters on such subjects as open access, technology, legislation, and law librarianship.

In addition to being one of the leading thinkers in law librarianship, Danner has encouraged the the development of more robust scholarship in and about the field and its overall professionalization, said Barbara A. Bintliff, director of the Tarlton Law Library/Jamail Center for Legal Research at the University of Texas School of Law.

Cox praised Danner for his consistent support of faculty and commitment to students during his tenure at Duke and through the ongoing evolution of law libraries, legal research, and legal education. “None of us feel that we lack the resources we need, because Dick’s been able to balance so well the competing acquisition needs for the library over the years,” he said. “It sadly is the case that with Dick’s retirement we are at the end of an important era, losing somebody who’s that skillful a librarian who’s been such a significant player in building the institution over the last four decades.”

Says Danner: “I am fortunate to have spent my career at Duke Law, which is the ideal place for me to pursue my professional goals as a librarian as well as my interests in research and writing. Importantly, I have been able to work closely with deans who understood the impacts that technology would have on legal education. (Former Dean) Pamela Gann, especially, saw how advancing technology would change not only the library, but how law is taught and learned, and how these changes could be leveraged to Duke Law’s benefit.

“In 2017, the ways of teaching and learning and the pursuit of knowledge continue to evolve, sometimes rapidly, changing how libraries and librarians support the core activities of the law school. I am confident that law librarians’ roles will continue to be essential to legal education, but this will require greater collaboration between librarians and faculty and stronger efforts by librarians to make known their extensive knowledge of research methods, technology, and law, as well as how their range of skills adds value to legal scholarship and teaching.”