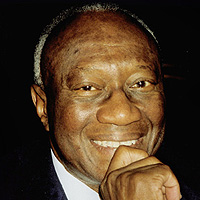 Integrating Duke was just a start

As he neared his graduation from Howard University with the high­est honors in 1961, David Robinson hoped to go to the best law school he could afford, but never dreamed of going to Duke. Then he met Dean Elvin “Jack” Latty, who aimed to end segrega­tion at Duke.

“Was I seeking integration? No,” says Robinson. “In fact, my entire family was opposed to it. They were concerned for my safety.” But Robinson found Latty, who came to Howard looking for poten­tial students, to be “a most persuasive, fatherly figure. He said, ‘We’re gonna do this.’” In convincing Robinson to accept a scholarship, Latty, who served as dean from 1957 to 1966, also talked up Duke’s intellectual caliber. “He said, ‘Here’s an opportunity to attend a small law school that is a true center for legal education.’ For me, it was a no-brainer.” Now retired from a first career at Xerox Corp., and a second one with the Miami-Dade County court system in Florida, Robinson feels he made the right choice.

Robinson, who broke the color barrier at Duke along with Walter Johnson Jr. ’64, recalls feeling comfortable at Duke. “Classmates were congenial. They didn’t go out of their way, but I didn’t feel isolated,” he says. Latty was always available as a sounding board. Although he perceived no grading bias on the part of the professors who were “thoroughly professional,” Robinson admits that he and Johnson shared a “special pressure” to be prepared for being called on in class. But for the most part, politics did not intrude on the business of learning law.

“This was the early 1960s,” he says. “Civil rights legislation was pending before Congress. Freedom Riders were traveling through the South. But at Duke, the law stu­dents were so busy studying, that there was not much in the way of controversial discus­sion. In that way, I suppose I was protected by the very walls I integrated.” He recalls receiving encouragement and support from Floyd McKissick, a prominent Durham civil rights lawyer (and father of Floyd McKissick Jr. ’83) who Robinson met in his second year.

Robinson joined the Federal Reserve following his 1964 graduation, opting for public sector employment at a time when many major law firms remained segregated. In 1967, he took an in-house position at Xerox in Rochester, N.Y. Two years later, he found that a company survey indicating that black employees were happy with their positions and salaries had been fudged. He helped organize the Concerned Association of Rochester, Inc., a nonprofit organization devoted to the elimination of discrimination at Xerox, and served as its executive director.

“Trained, as I was, as a lawyer, I was able to talk toe-to-toe with executives, draw conclusions from fact, and show them pat­terns and islands of isolation where there were no blacks and where they appeared to be pursuing a philosophy of tokenism,” says Robinson. “After a couple of meetings, they acknowledged that we helped them to face a significant problem — and face it early on.” Xerox became known for its progressive management, he adds. “I’m very proud of the fact that their CEO today is an African American woman.”

In 1978, Robinson became senior counsel for Xerox operations on the West Coast. He loved corporate work, he says.

“Dean Latty once had in mind he wanted me to teach the law. That was not in the cards because once I got into corporate work, I was hooked. Xerox offered the opportunity to be involved not only with domestic law but trans­national matters. And it’s a wonderful thing to have a single client.”

Robinson got another client and a second career when he was contacted by fellow Duke Law alumnus Gerald Wetherington ’63, following his 1988 retirement from Xerox and return to his native Florida.

“Jerry Wetherington was the chief judge [of the Eleventh Judicial Circuit of Florida] at the time. He said, ‘Dave, why don’t you come help us out in the courts — we can use the skills you acquired at Xerox.’” Robinson volunteered his ser­vices for six months when Wetherington suggested he “write up a job description.” Robinson became the first general counsel to the Eleventh Judicial Circuit of Florida, and served that circuit for almost a decade.

A former member of the Duke Law Board of Visitors and active as a volunteer in vari­ous community organizations, Robinson calls service his “first order of business.” He remains grateful for the “unprecedented opportunities” he had at Howard, at Duke, and in his career.

“I always wanted to do my best, but never felt I had anything to prove to anyone other than myself,” he says. “I just wanted to be myself and the best human being that I could be.”