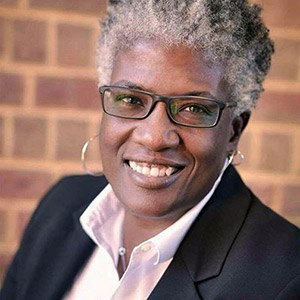 Satana Deberry ’94 became Durham County’s district attorney on Jan. 1, her latest step in a diverse career that has included criminal defense practice, government service, community economic development, nonprofit management, and fair housing advocacy. Deberry, who secured the post in May in the Democratic primary, ran on a platform promising sweeping reform of criminal justice in Durham.

A native of Hamlet, N.C., Deberry practiced criminal defense in nearby Rockingham early in her career. She said she was persuaded to run for election by community activists who told her that efforts at making the justice system in Durham more fair and efficient “always were stopped at the D.A.’s office.” She has been focused full-time since July on staffing and strategic planning, recruiting deputies with a wide range of legal experience, including public defense, to lead teams with specific areas of focus, and finding out how similar reform efforts are being implemented in such cities as Philadelphia, Brooklyn, Chicago, Seattle, and Corpus Christi, Texas.

Deberry spoke with Duke Law Magazine in November about her plans. The interview has been edited for brevity.

Duke Law Magazine: What are you bringing to this new post from your time as a criminal defense attorney in Rockingham, N.C.?

Satana Deberry: When I returned home [after attending Princeton and Duke Law, and working in the Legal Honors Program of the U.S. Department of the Interior], I was practicing with people I knew, so they were more than just clients for me. And I saw how easily you can become involved in the criminal justice system when you’re poor and black. It may be for no other reason than your community is over-policed or there’s a lack of economic opportunity for you in that community, so you turn to the things that bring you to the attention of the police. I was able to “unhook” the behavior, or what we were punishing, from the people. I never thought of my clients as criminals.

I also learned that prosecutors often cheat and lie. I left criminal law in 2000 partly because I felt like had no power. By the time my clients got to me, the die had been cast, essentially — my role was to just keep them from going over into the abyss this time, with full knowledge that we’d be back to the edge of the abyss again. That takes a toll emotionally.

DLM: You have pointed out that Durham has a long history of black political power and are, in fact, replacing a black district attorney who spent his career as a prosecutor. What is the key to changing what you see as persistent racial bias in the administration of criminal justice in Durham?

SD: It’s about culture. It is difficult to bring about change when you are raised in a culture, and there are also certain ways that career prosecutors are raised. When you’re in law enforcement, whether as a prosecutor or a cop on the street, when people see you, it is most likely the worst day of their lives. If every day you’re seeing people on the worst day of their lives, it can affect the way you view people. And a 20-year career of viewing people like that might not incline you towards change. You might not think the system is broken and in need of wholesale change, just tinkering around the edges. You are more likely to think you are overworked with cases and you’d like more resources. You likely don’t think that you control the number of cases that come to you. But the D.A. controls the calendar.

The idea behind my campaign was that we understand the impact on communities of punitive criminal justice policies and understand the breadth and power and discretion of the D.A.’s office. In North Carolina, the district attorney has almost 100 percent discretion as to who is prosecuted, what they’re prosecuted for, and how they are prosecuted. The only thing that the D.A. doesn’t have full discretion over is DWIs. So as D.A., I don’t supervise law enforcement, but I can make the decisions about the cases that go forward.

We know, for example, that simple possession of marijuana is, for black and brown kids, generally their entry into the criminal justice system. It mostly happens through traffic stops, which are designed to search cars and make arrests around simple possession. But we know that you can de-prioritize the prosecution of drug possession and still keep your community safe.

A career prosecutor might say, “I just have to take what the police give me.” But I’ll explain to law enforcement why I’m not taking those cases anymore: One, these are bad cases, and two, I’ve got 100 open homicide cases in Durham County. Which would you prefer I work on? I have to spend the same amount of energy on every case, and if I’m not spending the same amount of energy on these misdemeanor cases, I’m violating the constitutional rights of those defendants. We have people now who plead to stuff just to get out of jail. There may be no evidence, but it’s more efficient for the system.

DLM: Why are you seeking to eliminate bail and how will you do so?

SD: North Carolina law only requires bail in cases in which defendants may not show up for court or are threats to themselves or others. We are working now on a pretrial release policy with input from community stakeholders, defenders, and prosecutors. You can’t prove that somebody won’t show up to court before they fail to do so, so it shouldn’t be the assumption at the beginning that unless you put money on the table, people don’t show up for court. Most people do. And most people charged with misdemeanors and low-level felonies are not a danger to themselves or others.

The problem with bail is that if you don’t have any money, you can’t make it. People accused of misdemeanors are generally the poorest people in our community who have the least access to resources. They may have mental health or substance abuse issues that make it difficult for them to even gather the resources that they need. So they just sit in jail until their case is called. They are untreated while detained. And we’re all innocent until proven guilty, so we shouldn’t be detained unless guilt has been proven.

In Durham, poor people sit in jail until they’ve accumulated enough time to plead to time served and then get out. They are thinking in the short term — they won’t have probation and can just be done with the matter. But it leads to a criminal record. There are thousands of collateral consequences to even being charged with a crime in North Carolina, and certainly more collateral consequences to being convicted of one, even at a low level.

I am hoping to divert people with addiction or mental health issues and trying to build infrastructure in the community to support that. We have all the discretion in pretrial diversion, so once charges have been filed, the D.A.’s office can review each case to determine whether it’s appropriate for diversion, as a lot of misdemeanors and low-level felonies are. Right now, we don’t have enough community resources, but that may be partly because we haven’t demanded them. There are lots of groups that are working on substance-abuse issues, like the Criminal Justice Resource Center downtown, which just got a big grant to do more diversion and pretrial release work in Durham County.

We are going to do all of the things we can that are within our discretion and within the bounds of the statutes. Making the system safer doesn’t just mean for you and me, but also for the people accused of crimes.

DLM: What is your plan for assessing past prosecutions and identifying — and remedying — possible wrongful convictions?

SD: We’re putting together what we’re calling a “relief unit” to handle everything from wrongful convictions to expungements. We want to create a culture in which we are consistently reviewing ourselves. Right now, motions for appropriate relief are assigned to an assistant D.A. who is also prosecuting cases and they tend to fall to the bottom of their caseloads. We want to create some in-house expertise and policy around how we look at these motions and complaints about wrongful convictions and how we can be proactive.

Expungements are also getting a lot of play in North Carolina. A new state law allows for more expungements, but it’s done on the affected person’s motion. We’d like to make a policy change where we move some of that to the D.A. so that we can move to expunge records. Even when you have a voluntary dismissal or plead not guilty in North Carolina, it still goes on your record. Wouldn’t it be great if at such time as we dismissed the case we also had a pre-populated form to make a motion to the court for expulsion of your record?

My career, whether I’ve been actively practicing law or not, has been mostly about how we drive change through large-scale systems, whether that be health care, housing, or criminal justice. They’re mostly affecting people of color, communities of color, and low-income communities. I find the challenges facing the D.A.’s office very exciting — and daunting, but I tell people that I went from Hamlet to Princeton, so daunting is what I do.